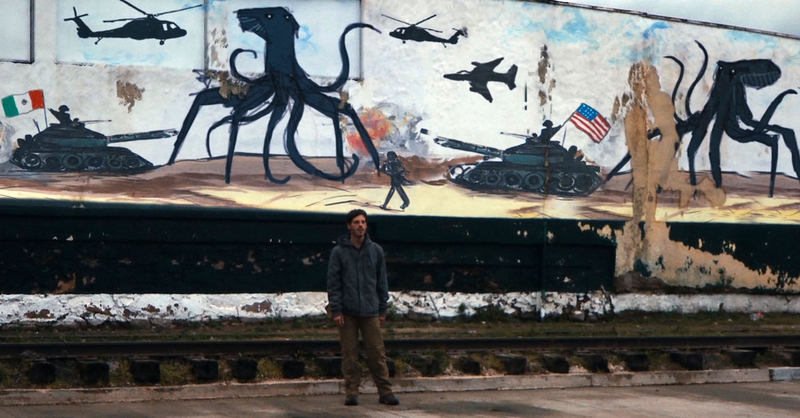 Editor's Note: This was originally published for FANGORIA on September 24, 2010, and we're proud to share it as part of The Gingold Files.

A caveat is in order regarding Monsters. Don’t go into it expecting a scare-a-minute creature feature; debuting writer/director Gareth Edwards has a different dramatic approach in mind. But do go in expecting to see one of the most remarkable and accomplished first-film achievements in recent memory.

The circumstances of Monsters’ production have already been well-publicized: Edwards, a digital FX creator by trade, took a single-digit crew and two actors south of the border and shot guerrilla-style in hi-def, employing non-pro locals for all the supporting roles. Then he assembled the footage and used his CGI skills to add vehicles, structures, destruction and, yes, monsters to the movie. It’s DIY filmmaking for the 21st century, and the FX are flawless; there are sights in the movie you’ll never guess were computer-generated, in no small part because Edwards adapts them to the down-to-Earth mise en scène of the overall movie, rather than showing them off. Monsters sports a you-are-there feeling that gives the story a consistent urgency, yet despite the run-and-gun production, the images are polished and colorful.

What you’ll remember most about the movie when it’s over, though, are the performances by Scoot McNairy and Whitney Able, a real-life couple playing two people who have never met before the story begins. McNairy is Andrew Kaulder, a photojournalist for a major news publisher (called New World, wink wink) who gets a call while finishing up a job in Mexico: He is to escort his boss’ daughter Samantha (Able), who’s been vacationing in the region, back to the U.S., where she is soon to be married. That’s easier said than done, since a large part of the country has been walled off for the past six years, ever since a NASA probe crashed there bearing extraterrestrial stowaways. Now, enormous, tentacled creatures roam the quarantined area, requiring travelers south of the “infected zone” to take ferries to America. It wouldn’t be a movie if things were that simple for Andrew and Sam, who eventually find themselves forced to make the trip directly through that zone, traveling by boat, car and on foot through jungles and up rivers with the help of assorted strangers.

While it’s in the nature of a movie like this that its central duo will inevitably face problems and obstacles from the start of their journey, Monsters doesn’t succumb to predictability. The complications are never quite what we think they’ll be, and Edwards keeps the tension humming by subverting expectations at numerous turns. Also by keeping the monsters largely offscreen—which is not really a tease, since we get a pretty good look at one in the opening sequence, which helps us imagine that they’re lurking just out of sight in any number of moments later in the story. Eventually, one of the giants does take center stage, in a scene that’s chilling and awe-inspiring—and, once again, doesn’t pay off the way you might anticipate it will.

Throughout, McNairy and Able are wholly believable as two people navigating their way through a perilous situation, and in the midst of the suspense, Edwards finds time for plenty of quiet moments allowing the audience to get to know them better as they get to know each other. The spectre of potential romance raises its head, of course, and it’s handled gracefully by both the characters and the filmmaker. Despite Sam being engaged, we wind up wanting these two to wind up together in the end—in part because that means that both will have survived.

Monsters has a few concerns in common with District 9 (set as it is in a region from which “aliens” frequently trek into the U.S.), but it’s not nearly as overtly political. Mostly, Edwards utilizes the Mexican settings (actually shot largely in Guatemala, Belize and Costa Rica) for their unfamiliarity, and the same goes for those locals pressed into service as performers, who add much to the overall authenticity, as well as moments of humanity and humor. The jungle locations are both beautiful and foreboding, and the final reels play out amidst a landscape of startling, evocative desolation. Monsters may not be a consistent scarefest, but it engages the emotions so well that its frightening moments, when they do arrive, are all the more potent.