Monster Anatomy: Meet Hell’s Denizens In ANYTHING FOR JACKSON

In the first entry of Meagan's new column, check out exclusive concept art from an all-female SFX team led by Karlee Morse! 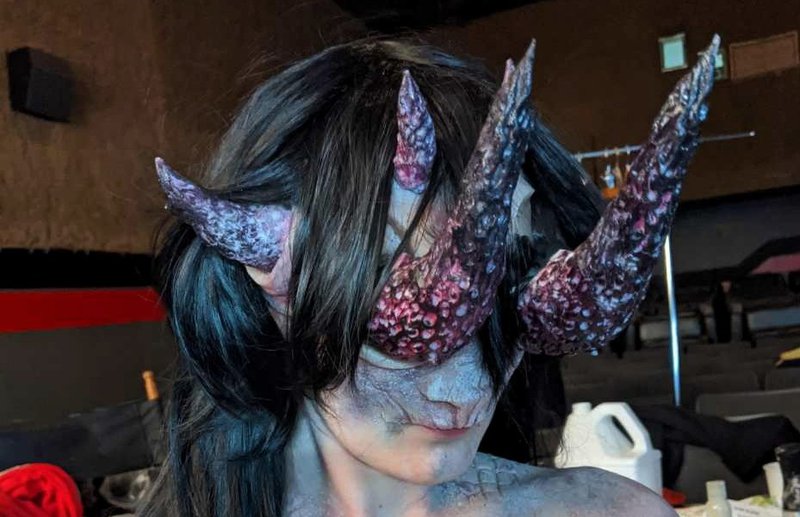 Vanth in ANYTHING FOR JACKSON. Thanks to Karlee Morse for photos!

Welcome to Monster Anatomy, a new monthly column in which Meagan offers a peek behind the curtain at what goes into creating modern movie monsters.

Warm, family-friendly holiday fare dominates director Justin G. Dyck and writer Keith Cooper's credits. Still, the pair never wavered from seeing their dream of creating an indie horror film come to fruition. That goal became a reality with Anything for Jackson, a delightfully devious twist to exorcism horror that brought the laughs and scares in spades. In it, bereaved couple Audrey (Sheila McCarthy) and Henry (Julian Richings) turn to Satanism and kidnap a pregnant woman, Becker (Konstantina Mantelos), for a ritual that will make her unborn baby a vessel for their deceased grandson's spirit. The only hitch is that Audrey and Henry are so new to Satanism that their dabbling with an ancient spellbook causes them to summon more than they intended.

Audrey and Henry make an appeal to Surgat, a minor demon that acts as a gatekeeper here. Surgat heeds their call via physical appearance, but the couple soon finds themselves hosting a slew of supernatural guests soon after. In creating the various restless spirits and demons that haunt the couple's home, Dyck and Cooper turned to a familiar collaborator, Emmy-award winning special makeup effect artist Karlee Morse. Morse, assembling and working with an all-female team of artists, designed the summoned spirits with only a few guidelines. "They wanted most of the ghosts to be based in reality. That's inspired by 13 Ghosts; you're meant to see how the ghosts have died. Or kind of like the Sixth Sense where you don't know that they're a ghost until you see the trauma on them," Morse explains of the parameters Dyck and Cooper set for many of the restless spirits. That includes the ominous Trick or Treater, Giggling Ghost, and actor Troy James' contorting Suffocating Ghost. 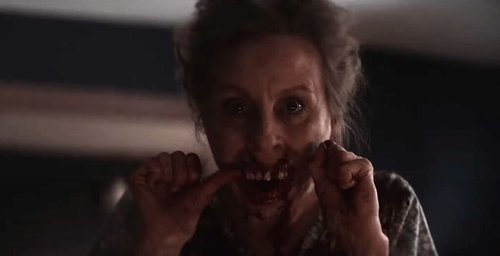 The Flossing Ghost (Marianne Sawchuk) stands out among them as the scariest entity; the haunting way in which she stares while she furiously flosses back and forth as teeth clatter to the floor is pure nightmare fuel. This ghost happens to be Morse's favorite, too. "When I read the script, I thought tooth lady is going to be the best! I met the actress – she's a nurse, first of all – and she's so sweet. She's so not what the monster is. She was very easy to work with. I had taken a dental impression of her, and then I made the gums on their own."

Morse explains her process of creating the dental piece and the loss of teeth effect: "There's this material called Bondo. It's like a glue, and a lot of prosthetic transfer pieces are made out of it. But when it freezes, it turns rubbery, yet it's super duper sticky. I made these sticker sheets of teeth backed with this material, and I froze them so that they were hard enough to keep their place.

"On set, I just had these sheets of teeth and, in between takes, if we needed more teeth, I would dry it off, pick one off and stick it in. And it worked. It worked so well. In the scene when she's flossing over the trick or treat bag, you can see them dangling, and that's the glue getting stuck. It was a triumph. Everyone was grossed out watching it on the monitor, too." 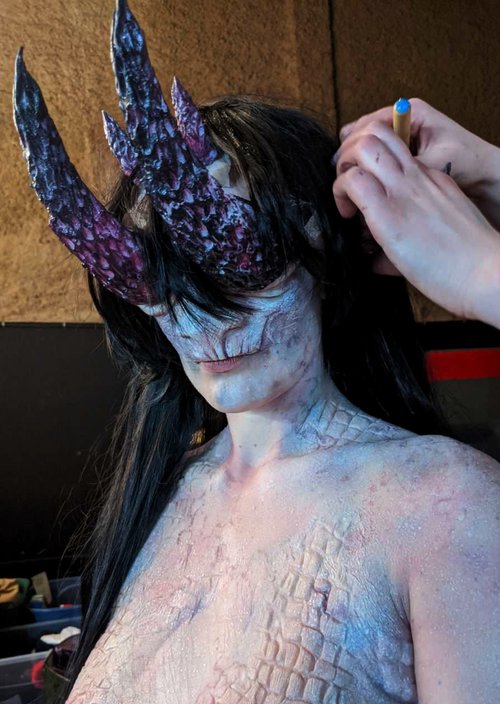 The film saves its most impressive creature design for last with the shocking, violent "birth" of female demon Vanth (Rebecca Lamarche). During the climax, Satanist Ian (Josh Cruddas) betrays Audrey and Henry, stabbing the former and performing a summoning ritual of his own. Paranormal activity reaches a fever pitch, inciting even more violence, and Henry succumbs to supernatural injuries as the pregnant Vanth claws and shreds her way out of his body. The grand entrance meant that the design should match. Again, Dyck and Cooper gave Morse artistic liberties for the design with a loose instruction, "They wanted her to be feminine looking and beautiful, but also really terrifying." Morse then explains the thought process that informed her creature design, "She was meant to be very animalistic. I was thinking of practicality with Vanth because she was meant to tear her way out of the body. I looked at many images of actual antelope horns and different things in nature that are really spiky. I did look at other makeup works, too, because Justin and Keith said they didn't want her to have vision. That's why she has the big horns coming out of her eyes." 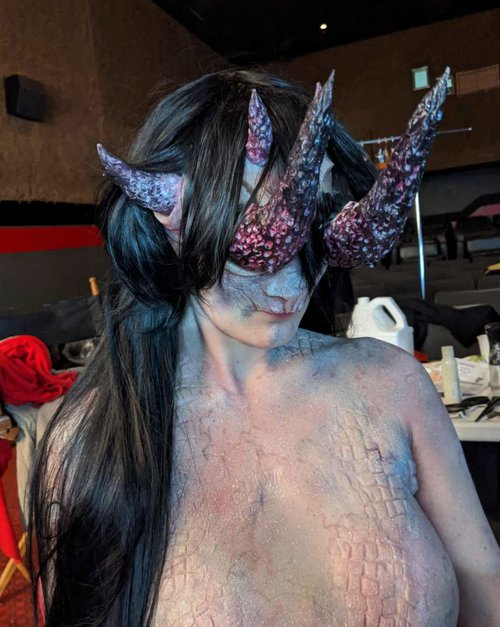 Vanth's entrance shows the demoness in a viscera-coated close-up, but the final parting shots reveal Vanth in full at a distance, crossing the road as Becker makes her escape. That also informed Morse's design, "The thing to think of is the silhouette that she creates. From a distance, we're going to see Vanth's pregnant belly. We want to be able to see the horns. And then the color palette comes into play then too, right? She was meant to be very pale and ghostly but covered in blood, goo, and slime. She was really slimy." 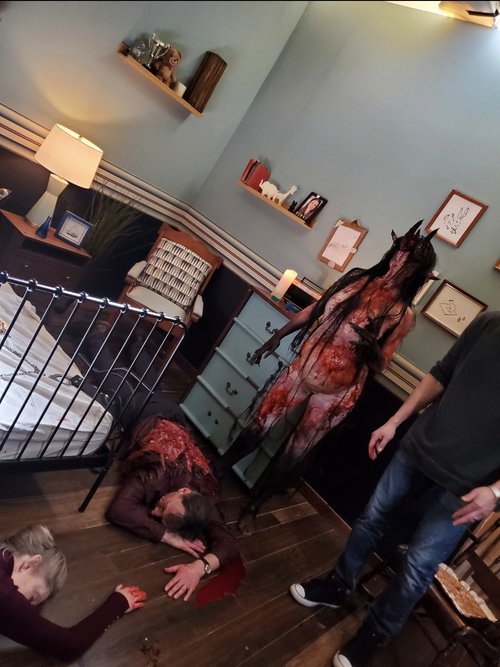 Putting that design into action through significant prosthetic appliances, airbrushing and a generous coating of blood from head to toe took roughly seven hours. The grueling process is made even more impressive by how inexperienced Lamarche was with special makeup effects. Morse offers effusive praise for Lamarche: "It was not for the faint of heart. Most people start with a little cut or something. She had done nothing before, and she was such a good sport about it. She looked amazing."

Aside from an eye-catching design, Vanth's makeup effects needed to hold up on camera and endure multiple shots. Mainly for the entity's gruesome emergence through Henry, "They had a very big, elaborate setup where we had made a false body, a torso that she pulled her way through. When we shot that, I didn't know how we're going to cut it together, but I trusted in it. I've made the thing, and she looks good coming out. Our DP, Sasha Moric, did a really nice job of shooting her well." Squeezing a prosthetic-covered actress through such a tight space sounds like a worrying experience for any SFX artist, but it worked out in the end. Mostly. "Oh, yeah. We actually did a take where her wig came off. Like it just came off," Morse laughs.

Anything for Jackson entailed creating a handful of ghosts, a whole lot of blood splatter, and an imposing demoness. Surgat’s design owes credit to costume designer Tina Razian and a mask from Immortal Masks, with the SFX team adding a perfectly creepy layer of slime to his exterior for icky, ectoplasmic effect. Despite the undertaking for the artist and her team, Morse is quick to extend as much credit to the village it took to create the film. That also includes the sound department. "The sound design in the film is phenomenal, too, and I think this is the first production that I realized how important sound design goes along with special effects. It truly complements it, and they did a great job on this," Morse reflects on both the sound of teeth clattering and the production as a whole.

With this reverse exorcism horror feature, the special makeup effects artist got to dabble with her two favorite things: creature creation and gore. Both bring a macabre balance to the heart and humor prompted by a pair of well-intentioned but clueless grandparents finding an unlikely solution to cauterize their grief. The emotional throughline of Audrey and Henry's love helps to thaw the icy chill of nightmares induced by Morse's ghoulish vision of Vanth and an unsettling Flossing Ghost.

Anything for Jackson is currently available to stream on Shudder. Thanks to Morse for the photos and below concept art! 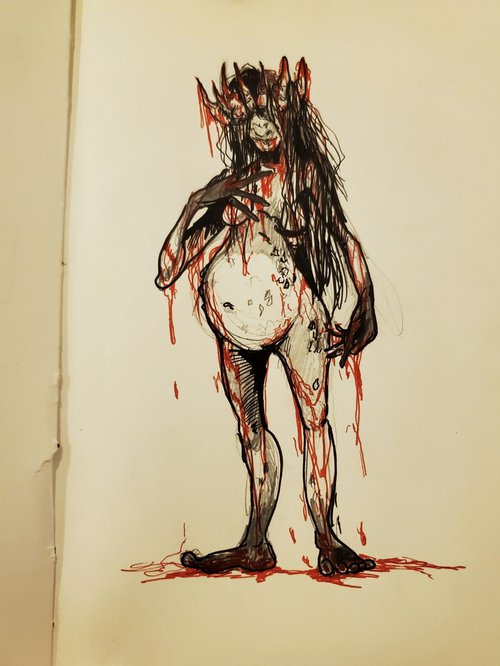 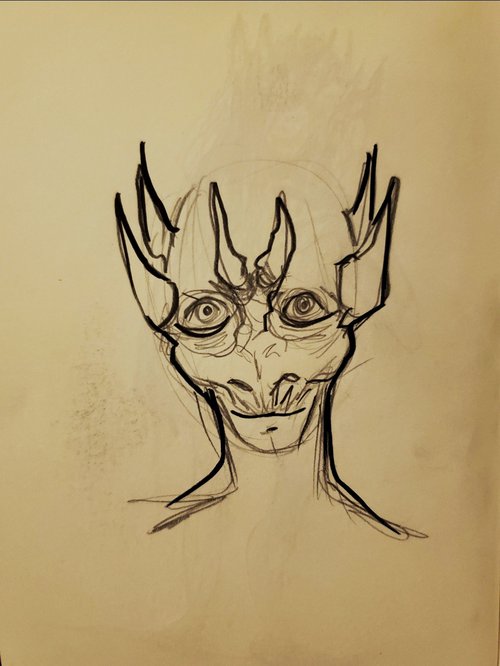 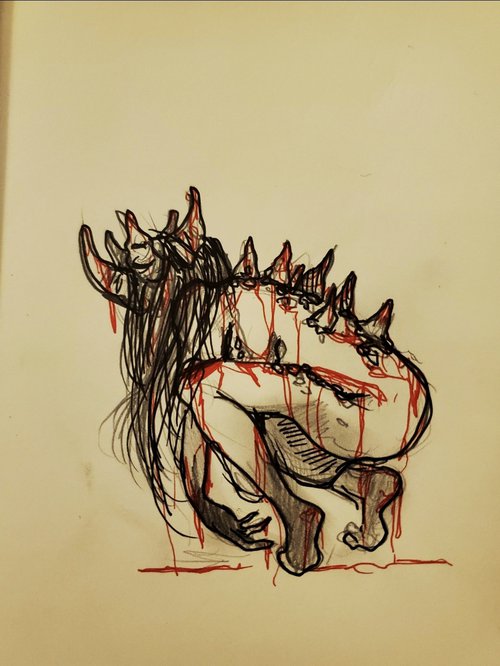 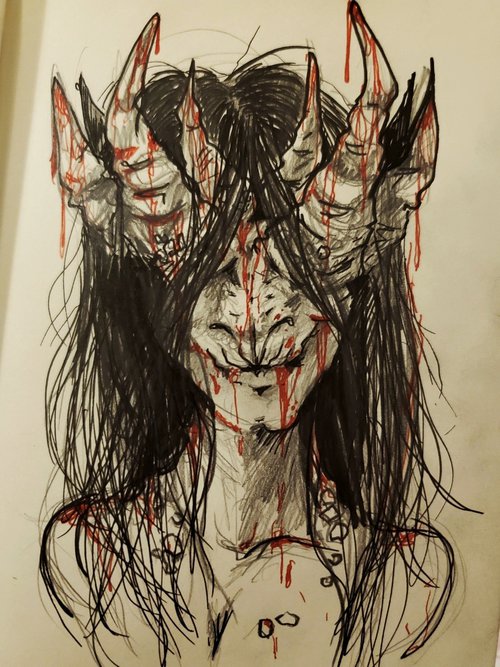