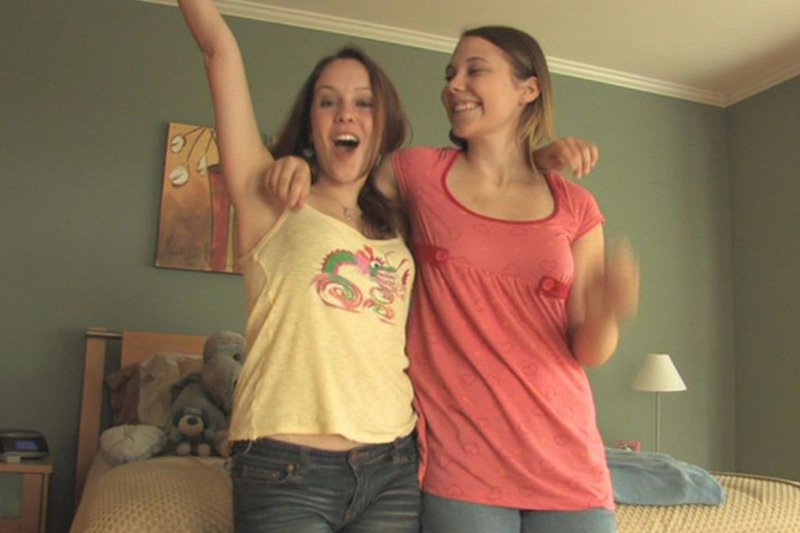 Editor's Note: This was originally published for FANGORIA on May 3, 2011, and we're proud to share it as part of The Gingold Files.

Megan Is Missing is a sleazy, hypocritical piece of lurid garbage hiding behind the fig leaf of Social Importance. It comes on like a clarion call to protest the victimization of young girls while it actually does everything it can to blame the victim.

Allegedly based on true events (though only tenuously, it turns out), Megan Is Missing has been, according to the opening title, “assembled using cell phone transmissions, computer files, home videos and public news reports.” A lot of these are video chats that tend not to be recorded in real life, but this is hardly the least plausible thing about the movie—more on that shortly.

The plot (and SPOILERS are necessary to fully discuss this) is simple: Megan Stewart (Rachel Quinn) and Amy Herman (Amber Perkins) are a couple of young teenagers, best friends though they’re polar opposites. Megan is the Wild Child, indulging in sex and drugs at every turn, while Amy is the Good Girl, and apparently the only one at their school. Megan begins web-chatting with a guy who calls himself “Josh” and won’t let her see his face, and she vanishes after going to meet with him. Amy suspects “Josh” and tells the police about him, and he threatens her on another web chat. He then kidnaps her, and the movie ends with 22 minutes of camcorder footage of “Josh” imprisoning Amy, treating her like an animal, brutally raping her, revealing Megan’s corpse to her, and finally burying her alive.

This final act is disturbing, all right, but then you’d have to be a pretty incompetent filmmaker to point a camera at a 14-year-old being tortured, sexually ravaged and left to die a slow death and not have that effect on a viewer. The fact that Megan Is Missing wallows in Amy’s degradation and mistreatment from the beginning—Megan subtly puts her down, a boy tries to force himself on her at a party and then slaps her, classmates repeatedly insult her—is made even more offensive by how cheap and dishonest the whole film is. To start with the comparatively less distasteful side, the story becomes completely contrived and unbelievable after Megan has disappeared. Once the authorities have become aware that Amy was present at Megan’s chats with “Josh,” and has communicated with him herself, there is no way in reality that 1) her name and face would be allowed all over TV news, 2) her subsequent Internet use wouldn’t be monitored and 3) she’d be allowed to wander off by herself into the woods where the villain could grab her.

Far more pernicious is the movie’s presentation of Megan. When she’s not engaging in torrents of the crudest possible sex talk, she’s heedlessly indulging in the act, leavened only by a couple of brief, on-the-nose bouts of self-examination. Because there’s no other narrative reason for Megan to be characterized as such a raging slut, the only conclusion the movie leaves us with is that she brings her fate upon herself with this behavior, a grotesquely puritanical extrapolation of the sex=death message of the more unsavory slasher films. Writer/director Michael Goi apparently believes he’s opening parents’ eyes to their children’s true lives with the cavalcade of debauchery in Megan Is Missing’s first half hour, but it comes off less as an examination of true teen experience than like a Larry Clark wet dream. The most objectionable scene has Megan describing, in lengthy and excruciatingly graphic detail and a tone suggesting she’s enjoying it, being forced to perform oral sex at age 10. She’s ostensibly talking to Amy but, in the movie’s visual scheme, is actually addressing the audience. Who’s exploiting whom here?

But of course, all this nasty stuff is being served up to reveal Truths We All Must Know to protect children from the predators of the world. Right? Nope, not at all. Megan Is Missing is repellent, manipulative schlock that feels like it’s salivating over the very abuses it pretends to condemn. Whatever good intentions were involved in its conception are drowned in its relentless determination to shock rather than educate. The yawning chasm between Megan Is Missing’s intended message and its debased impact is even reflected in the DVD case copy, which claims first that this is a story “every teen must know” and then that the movie “is not intended for persons under the age of eighteen.”

That DVD includes Goi’s detailed commentary about the production, a more anecdotal talk track by Perkins, Quinn and producer Mark Gragnani, a making-of segment and a deleted scene—all of which would be of greater interest if the final product wasn’t so unpleasant. There’s also a statement by Mark Klaas, whose daughter Polly was notoriously abducted and murdered in 1993—a horrific tragedy whose reference here sadly feels like an attempt to bestow a sense of importance on a movie that hasn’t earned it. It instead falls into a trend that has included newspaper ads extolling The Last House on the Left as a cautionary tale, and more recently, filmmaker David DeFalco odiously suggesting that a viewing of his Last House ripoff Chaos might have saved Natalee Holloway’s life. The only caution that should be raised with Megan Is Missing is to stay as far away from it as possible.