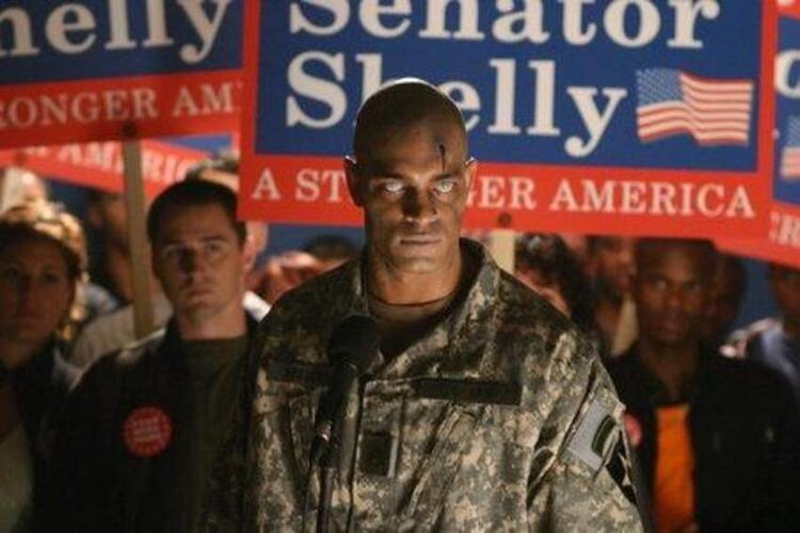 Editor's Note: This was originally published for FANGORIA on November 23, 2005, and we're proud to share it as part of The Gingold Files.

Part of the appeal of Masters of Horror has been the chance to see things on this Showtime series that you won’t see anywhere else on television. So far, that has mostly meant explicit gore, nudity and sexuality, which is all fine and well. But Joe Dante’s Homecoming, premiering December 2, treats us to sights that are not only unique in the TV horror genre, but have been off-limits anywhere else on the tube as well. Like, f’rinstance, rows of flag-draped coffins bearing the bodies of dead soldiers killed in a Mideast war.

Yes, Dante is back in horror-satire mode, and this time he and screenwriter Sam Hamm (adapting the short story “Death and Suffrage” by Dale Bailey) are directly taking on a target that the rest of TV-drama-land and mainstream Hollywood has heretofore largely danced around. The result is as pointed, clever and blackly amusing as anything the genre has seen in ages, a perfect example of horror’s ability to address subjects too touchy to deal with in other genres. It also takes the political subtext of George A. Romero’s Dead series and puts it right up in the forefront, without becoming preachy with its message. Dante and Hamm manage the tricky balancing act of shining a harsh light on current events without losing sight of the fact that they’re telling a horror story first and foremost.

Hamm’s script takes place in the near future, specifically 2008, when a certain Republican president is running for re-election and a war he duped the nation into fighting still rages on. The central characters are campaign consultant David Murch (Jon Tenney) and right-wing author Jane Cleaver (Thea Gill), who has written a popular book attacking the “radical left”—any resemblance to Ann Coulter is, uh, purely coincidental. After meeting on a dead-on parody of an issues-oriented talk show (Terry David Mulligan is perfect as the host), the two find themselves politically and romantically attracted—but their world is shaken up when the dead begin returning to life. Not all the deceased, mind you, just those who were killed in that particular overseas combat, and they’ve got a particular—pardon the pun—ax to grind. It’s an extrapolation of the Vietnam-era ghoul film Deathdream to the nth degree—the image of the first revived corpse pushing its way out from under the Stars and Stripes that cover its casket is the most pointed and arresting image the genre has recently offered.

No more should be said about the plot particulars of Homecoming, which is packed with wonderful details and images; given a document to read, a zombie missing an eye puts on a pair of glasses with a shot-out lens. The way in which Dante and Hamm keep the story twists coming, never losing steam or running in place thematically or dramatically, is kind of breathtaking; every scene has a revelation or line of dialogue that adds new dimension to either the story or the satire. The actors (also including Dante regular Robert Picardo as a political advisor with a secret of his own) adopt just the right tone of straight-faced earnestness, selling every line and never winking at the camera. The behind-the-scenes craftspeople do a good job of substituting Vancouver locations for the D.C. area (this is also the most expansive-looking Masters yet), and Greg Nicotero and Howard Berger contribute undead makeups that get the points across (like that eyeless ghoul) without being showy.

As the film goes on and we learn more about the characters (particularly Murch), Homecoming’s antiwar message gains new levels of resonance, and it comes to a stirring and completely apt conclusion that perfectly ties up the assorted story threads. And even though horror fans are the species of television viewer least likely to be conservative, you don’t get a sense of preaching to the converted here; the writing and filmmaking are so sharp, even some red-staters might respond to the material. For the second year in a row, a satirical zombie project stacks up as the year’s best horror production; here’s hoping someone in Hollywood notices, and gives Dante a shot at a feature that will show off the skills that, on this evidence, are only becoming sharper with time.