MASTER OF HORROR: THE OFFICIAL BIOGRAPHY OF MICK GARRIS Takes Readers On A Deep Dive Into The Life And Career Of The Nicest Guy In Horror

“Who the hell is Mick Garris?” 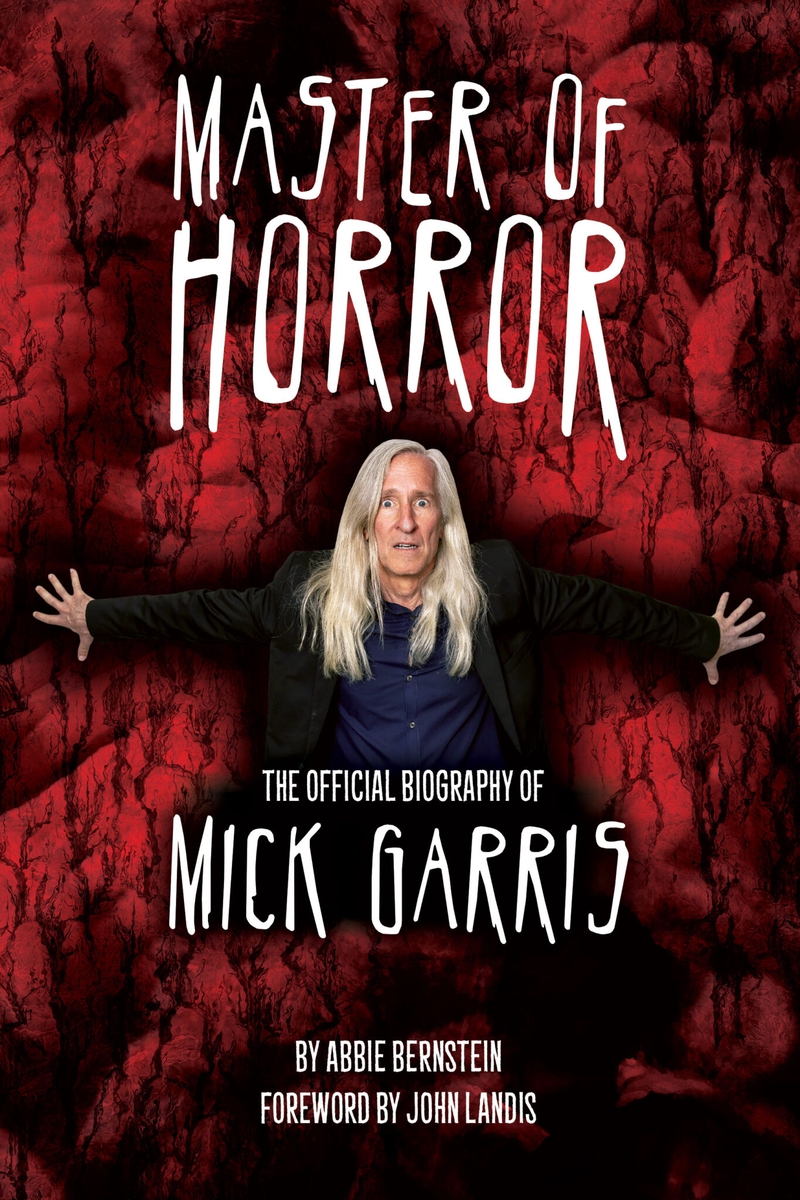 “Who the hell is Mick Garris?”

If you’re reading this article, then the above question is very likely one you’ve never asked. Garris is an icon around these parts (and not just because of his luxurious silver locks). Most well known as the director of Critters 2: The Main Course, Stephen King’s Sleepwalkers, and creator of the groundbreaking horror anthology series, Masters of Horror, he’s also an accomplished novelist, journalist, and maybe the most prolific interviewer to ever hold the title (one he still holds as host of the Post-Mortem Podcast). It’s really no surprise that someone wrote a book about him.

However, in reading Abbie Bernstein’s new book, Master of Horror: The Official Biography of Mick Garris, I learned that the above credits don’t even begin to scratch the surface of who Garris is as an artist, let alone as a person.

Bernstein (author of The Art of Mad Max: Fury Road) is not only a writer & interviewer herself, she’s also a longtime friend of Mick. Before getting down to the business at hand, Bernstein has a warning for readers: “[Mick Garris] has no scandals and no known enemies, and any skeletons he has are on display on his sets and in his office, not in his closets.”

SPOILER ALERT: Bernstein’s telling the truth. Garris’ sincerity, generosity, care, and above all, kindness, are the crux of who he is not only as an artist but as a person. Throughout the discussions in Master of Horror, Mick is adamant that absolutely nothing about making a movie is more important than the safety of those involved, physically and emotionally. Early on, Joe Dante says of Garris “he always tried to find something positive to say,” and that proves to be true even in his own biography. Mick often clarifies how much someone has to offer before making a comment that even remotely resembles criticism (though to be sure, Garris is first and foremost critical of himself).

Master of Horror: The Official Biography of Mick Garris is a loving, insightful, and astonishingly deep dive into Garris’ jam-packed career—reading this book has convinced me that the only days off Garris has had in the last 35 years were when he came down with the flu while shooting The Stand in 1994 (seriously). It’s through the discussion of Mick’s work that aspects of his personality come out, illustrating just how much of himself he puts into his projects, whether it’s his atheism & very liberal politics in regard to Christian themes in The Stand, or turning Riding the Bullet into an outlet for the grief he held over the death of his mother and siblings. But I’m getting ahead of myself.

While there is no question about Garris’ status as a “Master of Horror,” the term itself is one of the few things that cannot be traced back to Mick’s brain. Back in the early ‘00s, sitting around a crowded restaurant table are Larry Cohen, Stuart Gordon, John Carpenter, Don Coscarelli, Bob Burns, Guillermo del Toro, John Landis, William Malone, Tobe Hooper, and a baby faced Garris. At the table beside them, a birthday was being celebrated. The Maestros of the Macabre (that one’s mine) joined in the singing of “happy birthday,” followed by Del Toro’s proclamation, “the Masters of Horror wish you a happy birthday!”The seed was planted.

Garris discusses his childhood & growing up in California with numerous siblings & step-siblings, as well as the dissolution of his parent’s marriage (in which he found himself playing the mediator between fighting adults, a role he’d go on to play throughout his life as an artist).

While there was certainly hardship, it didn’t result in any kind of anti-social behavior. If anything, it all helped develop him into an extraordinarily kind, understanding, and fun artist that every single person interviewed for this book knows him as. And there are a lot of people interviewed in this book. (Cynthia Garris, Steven Webber, Matt Frewer, Elliott Thomas, Annabeth Gish, John Landis, Clive Barker, Joe Dante, writer David J. Schow, and FX artist Howard Berger just to name a fraction of them).

In high school, Garris began his lifelong career as an interviewer, first for his school paper (where he interviewed Ray Bradbury) and then going on to write about music for The San Diego Door, interviewing Janis Joplin & Jimi Hendrix all before the age of 18. He attended a two-year TV production course at Grossmont College, then would go on to be the lead singer in a progressive rock band, called Horsefeathers. They gained local popularity in San Diego, but upon moving to LA, were only able to book a handful of gigs (one of which was on the sidewalk outside of The Pussycat Theater at the premiere of The Devil in Miss Jones,) before Garris scored his reception job at Lucasfilm, forever plunging him into the world of filmmaking.

His job as a receptionist took an interesting turn when Mick became the official remote-control operator of R2-D2 for commercials and public appearances (including the 1978 Academy Awards). Garris’ day job never stopped him from writing, nor producing “Making of” docs for movies like Scanners and John Carpenter’s The Thing. In fact, the latter happened to coincide with the arrival of a script Garris had written on the desks at Amblin Entertainment. He was hired by Steven Spielberg & Kathleen Kennedy to write a couple of scripts for ABC’s Amazing Stories. He was then quickly promoted to story editor for the entire first season and thus swept into the filmmaking whirlwind that audiences are so lucky to be the beneficiaries of.

Since the book is mostly told through the quotes of those interviewed, Bernstein’s authorial voice is sparse. It’s through the book’s contents that her sincerity in the subject truly shines. It is abundantly clear that, aside from being a friend of Garris’, Abbie Bernstein is a fan. Much like Garris interviewing his favorite filmmakers, Bernstein’s aim is clearly to pick the brain of an artist she admires. The titular Master of Horror isn’t the only one with good stories either. I was particularly struck by the reverence & insightfulness with which actor Matt Frewer speaks while discussing bringing Donald Erwin Elbert, aka The Trash Can Man, to the screen.

Cynthia Garris is additionally a wealth of joyously conveyed information. She speaks with true adoration for her husband and cinema and provides very personal insight into experiences in working on his sets. Through her natural professionalism & kindness, Cynthia worked very hard to dispel any ideas that she was cast through nepotism (though the Garrises both openly joke about her ‘sleeping with the director’). She also discusses the traumatic experience of wearing the special effects make-up for Xanthi in Critters 2, which reads like a short story by Thomas Ligotti.

Master of Horror should also be especially attractive to filmmakers as the discussions are truly deep dives into the emotional, technical, & logistical decisions Garris makes on every single project, regardless of role. However, it is in no way impersonal. There is a palpable joy that comes through in Garris’ words, even when discussing lens choices on Desperation.

Additionally, there are entire chapters dedicated to his work as a novelist, the Post-Mortem Podcast, and why his experience directing an episode of ABCs Once Upon a Time is one of the proudest of his career. Readers can also learn a lot about projects that never came to fruition for one reason or another, including a number of collaborations with Clive Barker, and a version of 1999’s The Mummy that was, at one point in time, slated to involve not only Garris, but director George A. Romero. C’est la vie!

Regardless of which project Mick is discussing, it’s clear that he tries to approach everything with the same reverence & sincerity. “I learn from everything I do,” he says at one point in the book, which is something I recognized in him almost immediately. He’s also very open about what he feels works or doesn’t in the finished product. Whatever the project is, Garris approaches it whole-assed & excited to try his hardest. Sometimes things don’t work out the way you want them to. Garris doesn’t get discouraged, he just does it differently the next time, but just as whole-assed as ever.

Master Of Horror: The Official Biography of Mick Garris is now available.