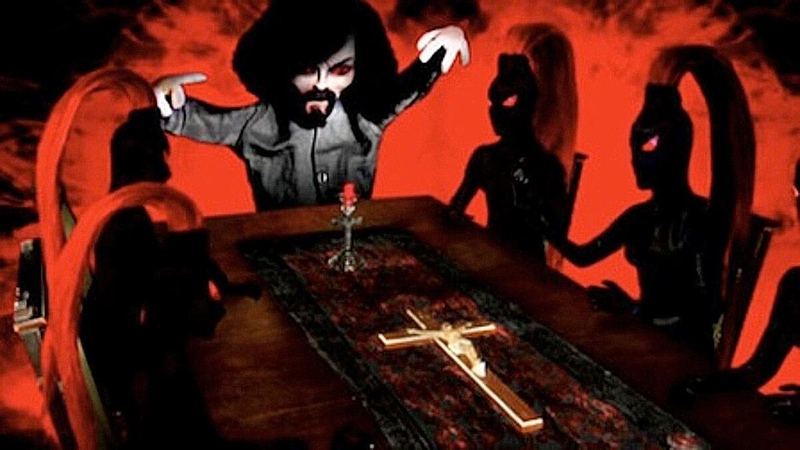 Editor's Note: This was originally published for FANGORIA on January 26, 2006, and we're proud to share it as part of The Gingold Files.

“Not for the easily offended,” reads the title card that opens Live Freaky! Die Freaky!, followed quickly by the logo for You Got Bad Taste Productions. To some fans of sick cinema, that kind of thing sends up a warning sign—the best such films tend to be not those that set out to deliberately offend, but those that just do their own thing and don’t give a damn whether anybody’s offended or not. This puppet-animated phantasmagoria dealing with the Charles Manson murders had the potential to be a twisted laugh machine, but squanders it by taking the easy way out with a puerile, lowest-common-denominator approach.

The advance line on this movie was that it’s about a futuristic, postapocalyptic world in which religion has died, and the remaining society adopts Manson as its savior after the discovery of a battered copy of Helter Skelter. That’s a premise with a lot of provocative promise, but it’s not really what Live Freaky! is about at all. This material is only dealt with in very brief live-action segments that bookend the meat of the film, which is a stop-motion chronicle of Manson’s life and crimes. Or should I say, “Charlie Hanson’s,” since the names have been slightly changed to fulfill the any-resemblance-to-real-people-is-entirely-coincidental clause in the movie’s end credits. Thus Sharon Tate becomes “Sharon Hate”; writer/director John Roecker’s a.k.a. imagination apparently ended with the application of the letter H, and thus we additionally get characters named Habagail and Hadie.

What we also get is a series of tableaux featuring NC-17-level gore and sex performed by the animated figures, which is evidently supposed to be funny in and of itself because Roecker hasn’t applied much in the way of a satirical mindset to the Manson story. The characterizations are predictable—Hanson and his Family are addled hippies, Sharon Hate and their other targets are self-absorbed richies, the press and the justice system are clueless and self-serving. For a while, the humor consists of softball punchlines applied to inappropriate situations, as when Hanson sends a carful of followers off to cause mayhem with, “Now go do what you have to do—and don’t forget, you can use the carpool lane.”

Things get uglier when Sharon and her crowd are on screen, and the dialogue descends into a string of base and debased discussions of straight and gay sexual practices. The endless foul-mouthedness reaches the point of diminishing returns very, very quickly, to the point where one can wearily identify with a policeman character who later says, “Would you guys stop talking about poops and cocks? Is that all you guys talk about anymore?” Of course, all this is designed strictly to offend, as is playing the Family’s murders for slapstick comedy, but it doesn’t work because the transgression isn’t based on any kind of point of view other than being transgressive, in the most simpleminded fashion. With no reason given as to why we should find the explicit sex and violence funny, it doesn’t even become legitimately offensive; it’s just dull.

The stop-motion imagery and lighting are occasionally quite expressive, suggesting that something really could have been achieved here if the material wasn’t so regressively coarse. As it stands, if you want to see a genuinely shocking film about Charlie and his crimes, see Jim VanBebber’s The Manson Family; if you’re partial to puppet sex, stick with your bootleg of Meet the Feebles; and if you want to watch animation that pushes the taste boundaries and actually has a point to make in doing so, keep watching South Park.