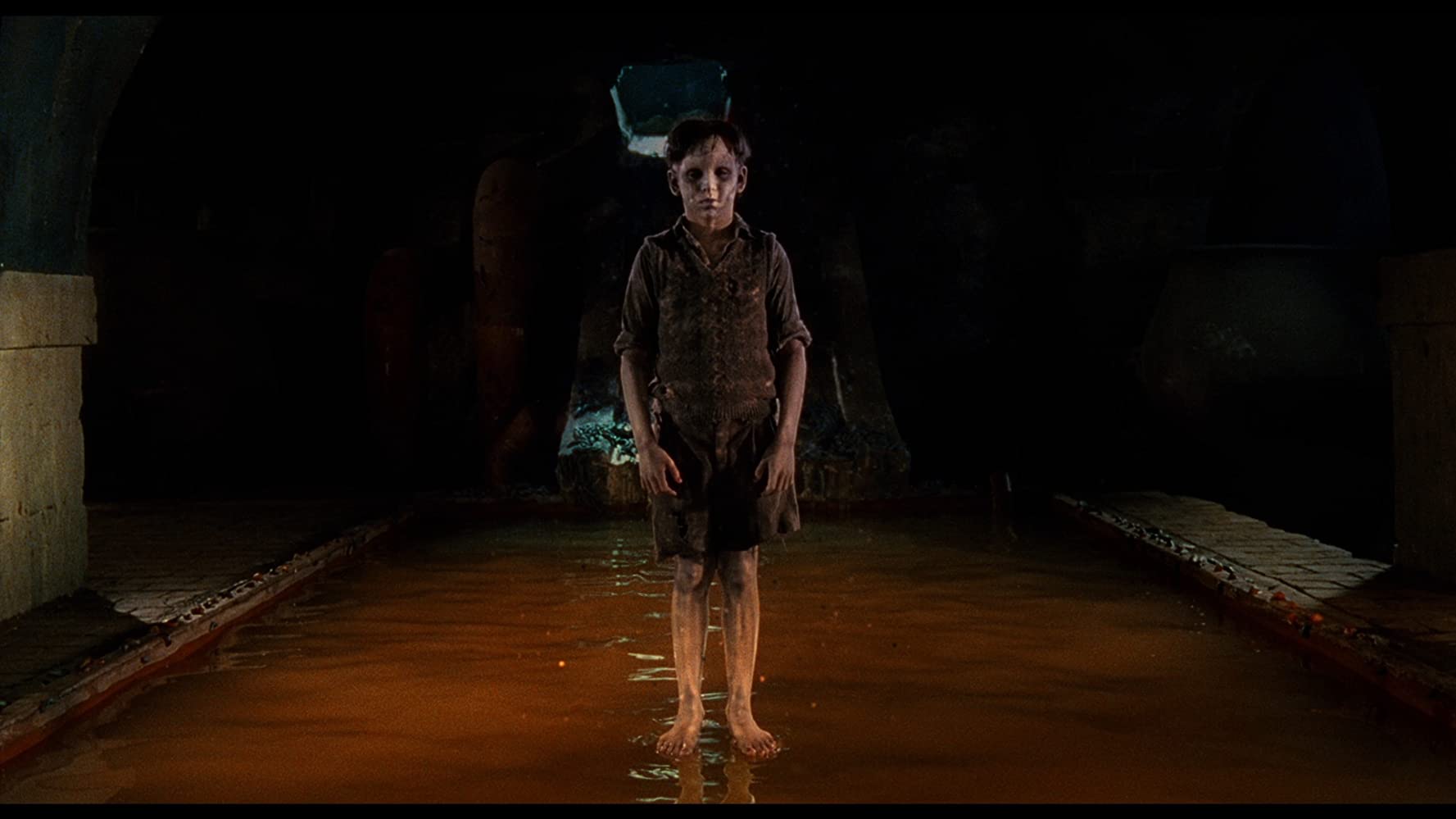 t's safe to say that we are all living in a horror film right now. But, while most of us are on lockdown — isolated or safe-distanced — the latest sequel to the “Spanish flu” (more than 100 years in the making) should remind us that things have been far worse for swine, men, women and children alike.

For now, many of us are beginning to experience living with our children more than ever as the cabin fever sets in. My suggestion is not to leave them banging their heads against the wall for too long while you make your espresso and browse the interweb for toilet paper. They need something constructive to do, otherwise, they could harm mom and dad or (oddly) become a figment of your own imagination like one of those hauntings or fantasies we are all too familiar with in Spanish cinema.

Ever since Luis Buñuel and Salvador Dalí sliced open an eye in 1929 with their silent, surreal short film Un Chien Andalou (a horrific prediction of 2020 vision), Spanish cinema has assaulted the audience with some of the most powerful imagery within the history of horror. Although some examples are of Mexican origin — most notably the work of Guillermo del Toro — the films presented here still remain some of the strongest examples of Spanish cinema. This is due to their nature as transnational co-productions and most importantly, their historical background often set during the Spanish Civil War and the Francoist era. Without this going all History channel, it is important to set the background very clearly... like a bottle to the face.

For almost 40 years, fascist dictator Francisco Franco Bahamonde nurtured a cult of personality during his reign of brutal repression that witnessed thousands killed for prosperity. But here comes the worst part. Under his rule, hundreds of thousands of children were torn from their families. Look up the rebel propaganda slogan, “If you tolerate this, your children will be next,” and you'll find the powerful words pasted under the image of a dead child; it still remains a formidable piece of propaganda 90 years later. The message highlighted an ideological cleansing that led to babies being kidnapped from Republican parents and given to Catholic families, deemed worthier by the state.

It is no wonder that the child is often the perfect lens to present such a strong allegory for Spanish horror. In his book, The Two cines con niño: Genre and the Child Protagonist in over Fifty Years of Spanish Film, writer Erin K. Hogan directly refers to this period as “nuevo cine con niño” (new cinema with child), and it remained a subgenre up until the 2000s. Spain's trauma is painted with the blood of its people and the loss of its fragmented children raised as haunted versions of themselves. Spanish horror is child as victim, often either witness to the execution or become the agents as they struggle to express their emotions and eventually lose themselves in alternate realities of nightmare, fantasy and broken dreams.

Childhood memory and cinema have always been captured perfectly since the dying days of the Franco era. Although it is far from a horror film, no exploration of the child in Spanish cinema would be complete without Víctor Erice's drama, The Spirit of the Beehive (1973). The film tells the story of 6-year-old Ana (a superb Ana Torrent) and her obsession with James Whale's 1931 classic, Frankenstein. This is a film as much about the spirit of cinema as it is the magic that inspires the dreams of children in post-civil war society and, along with Torrent's follow-up role in Carlos Saura's Raise Ravens (1976), was a huge influence on Guillermo del Toro's Pan's Labyrinth (2006). Tapping into the works of Lewis Caroll, del Toro manages to reforge Alice's Adventures in Wonderland into a dark fantasy horror melded with the brutal reality of history. In fact, it's the historical elements that are the most horrific as we witness Ofelia’s escape to her own dream world that involves her own striking mythology.

Spanish director J.A. Bayona also returned to childhood trauma with his fantasy, A Monster Calls (2017). Although based on a British novel, Bayona infuses the story with traces of Bernard Rose's Paperhouse (1988) and the confined, suffocating nature of his previous films that place children front and center of the horror. This has become a key signature of his work, most prominently displayed with his exploration of the haunted child.

Ghost stories will always provide some of the best examples of horror and within Spanish cinema, they have become the perfect cipher for displaying trauma. The abandoned and orphaned have become so prevalent within Spanish cinema that they tend to manifest as disturbing apparitions of children such as Santi in del Toro's The Devil's Backbone (2001) or the haunted children of Mama (2013). However, the twisting of these tropes can be seen in Alejandro Amenábar's The Others (2001) and J.A. Bayona's directorial debut, The Orphanage (2007) — the latter of which was produced by del Toro. The Orphanage film that once again draws influences from Raise Ravens' uncomfortable, haunting atmosphere and locations (even the return of Geraldine Chaplin) that constantly challenge the audience's perception of the supernatural that is integral to the film's final reveal.

These onscreen hauntings present a prime example of the repressed nature of Spanish horror where central protagonists and antagonists remain trapped in the past. Santi's ghost in The Devil's Backbone is in constant flux with his final moments as he bleeds upward from his head trauma, trapped in his drowning nightmare. Through his fragile and horrific appearance, he illustrates a nation's conflict and the repercussions on the innocent that (along with the bomb) makes it impossible for us to forget the broken children who present the true horror of conflict.

These broken children are most explicitly shown in a collection of jars that contain infants who have died from spina bifida (hence the title), floating in a special rum called “limbo water.” Inspired by an incident from his own childhood — where del Toro stumbled across a pile of discarded fetuses while visiting a hospital  — the scene has even more potency. These moments have inspired an unfettered imagination captured within his sketchbooks. He’s a man who has learned to commune with the monsters he has seen: "It's like having a dialogue with a younger me," he once stated in the introduction of his book, Cabinet of Curiosities, back in 2013.

There is an intricate detail to del Toro's musings that form a crucial part of his creative process, tapping into and giving birth to some of the most unique horror we have seen on screen. This is no surprise; he endured the harsh realities of a strict Jesuit upbringing — his grandmother would make him line the soles of his shoes with upturned bottle tops — where he also witnessed children attempting to drop a baby off a bridge believing it would bounce. This master of horror's method is literally built on his resilience and resistance to the real monsters and monstrous acts he has seen and experienced as a child.

After Franco's death in 1975, one of the most compelling examples of Spanish horror was released. Narciso Ibáñez Serrador’s Who Can Kill a Child? (1976) was one of many films during this period that added to the influx of demon child productions. But the story, commentary and setting of Serrador’s film delivered something far more provocative and owes as much to Hitchcock and Nicolas Roeg as Friedkin's turning of heads or Cronenberg’s body horror.

What is seemingly innocent becomes a natural horror show as pregnant couple Tom and Evelyn visit a remote Spanish island where they are terrorized by the local children who have killed the majority of adults. At its core, Who Can Kill a Child? deals with precisely the same anxieties of war and invasion projected onto the innocent. “In the end, the ones that always suffer the most are the children. From war? The children. From famine? The children.” A character echos the film’s preceding seven-minute credit montage that hammers the message home through stark black and white news footage to the backdrop of children humming a sweet melody as they giggle intermittently. It's creepy as hell and still remains one of the most harrowing opening documents of any film.

Then we have the infamous scenes that are a far cry from Serrador's TV game-show background. After a young girl beats an old man to death with his own walking stick, Tom witnesses his body hoisted up into the rafters of a barn while younger children play old man piñata with a scythe. It’s unbearable to watch and as Tom turns away, their cheers signal the old man’s beheading. We see nothing (yet see everything at the same time), the horrific image in our heads triggered by an earlier scene involving a traditional piñata spilling its candy guts to children on the streets of Spain.

Throughout the film, the young ridicule tradition and the power system — the very things that have kept them repressed during the regime — representations of religion and their culture that become a subversion of what is most important to the people of Spain. Original sin manifests itself onscreen as though every child has been reset, removing any semblance of empathy — they are cold and unpredictable — yet because they are children you never expect them to attack. This is what the true horror of war is — the loss of innocence and the loss of our children — and Serrador sets out to show what may be left of our future if the repercussions of our actions manifest themselves through natural phenomena. Is it the trauma from the survival of war and lack of medical attention that has driven these children to madness? Or is the film about how parents lost control of their own as they witness their kids turn into little monsters, a microcosm of our own anxieties.‍

As one of the hardest-hit countries from COVID-19, Spanish horror will become global horror. However, in retaining its cinematic voice, it will be interesting to see whether the childhood lens remains intact. Will we witness the horror of the last children on earth — holed up and immune to a pandemic — as they watch previous generations wiped out? One thing is for certain, whether these PC (Post-COVID) films become Lord of the Flies meets Rec. (or not), Spanish horror has always presented children as historical actors — from bad seeds and seers, the twisted and the twist itself — delivering some of the most unforgettable horror films of all time

‍Rich Johnson has written for Little White Lies, Hotdog, Network, Shots, REBELLER and Diabolique Magazine. With upcoming film commentary and material for a number of home releases, he also hosts @filmandpodcast and is one half of @mondomoviehouse. His Devil's Advocates book on Bone Tomahawk is due out in late 2020.