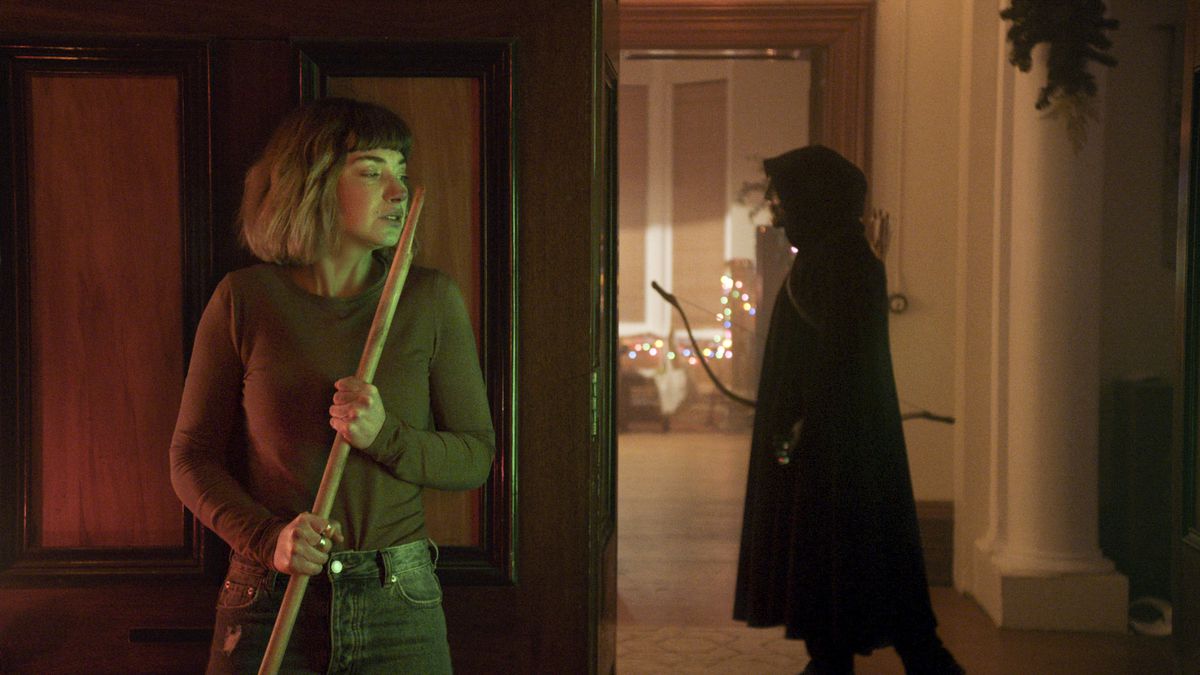 ‍
This past Friday, screenwriters April Wolfe and Sophia Takal unveiled a modern take on Bob Clark’s beloved 1974 slasher Black Christmas. Reviews were mixed and the box office was disappointing.

On Monday, a Twitter user declared the film made him “root for every man in every horror film to rape the female lead.”‍

Since the film’s initial announcement, the online reaction has been extreme, to say the least, and throughout its production, the film, its female creators and its defendants have been the target of a particularly venomous brand of online harassment and bullying. Most of the vocal antagonists are male; the many comments on blogs and social media are less critical of the film’s narrative or technical components than they are a cartoonish real-time feed of sexist and misogynist commentary regarding real-world politics and gender.

Much of this dialogue is critical of the film’s “liberal, woke, feminist” storyline, lamenting the rise of politically correct (PC) culture in the #MeToo era and - in the case of popular Shudder host and horror icon Joe Bob Briggs - decrying the need for modern horror films to brazenly wear their politics on their sleeves. Certainly there’s a debate to be had about the subtlety of sociopolitical subtext in any given genre film, but a man on Twitter saying the film made him wish for rape scenes is probably not looking to have that discussion.

In the film’s supernatural third act twist, the killers are revealed to be members of a campus fraternity, mindless drones who kill because they are under the influence of black goo contained within the bust of the college’s racist, sexist founder. The motivation for the killings (spelled out in the climax) is a deliberate attempt by straight white rich fraternity brothers to reclaim their power in a world where they feel threatened and neutered by outspoken women.

This rationale is obviously indebted to the feminist politics of the 1974 original, which included a progressive subplot about abortion and a lead character’s right to choose. In this new version, Wolfe and Takal have taken logical steps to modernize the discussion around women’s sexual rights: the 2019 Black Christmas addresses rape culture, toxic masculinity, and the dangers of not believing women.

In the weeks leading up to the film’s release (and over opening weekend), the comments have become increasingly aggressive, as though the film’s mere existence is an affront to a certain kind of man.

Consider these responses, collected from the comment sections of reviews of the film:

“...skewer this piece of shit...a thinly veiled excuse to hurl insults and denigrate white men and please all the ideologically possessed morons in Hollywood along with the globulous, blue-haired feminists and limp-wristed ‘men’ under their progressive spell” (Bloody Disgusting)

“My gahhhh. I have never seen such garbage in my life. I felt like I was in a man hating seminar." (Bloody Disgusting)

“I’m most definitely not an incel. There is a difference between being politically aware and this late-stage wokeness that Hollywood is diving on lately. It feels incredibly forced and phony and it reads that way." (Bloody Disgusting)

“The reviewer is just another pathetic woke liberal” (DreadCentral)

When box office estimates revealed that the film would underperform its projected $10M weekend gross (it made $4.4M on a $5M budget), the commentary shifted to more of a celebratory, mocking and validated tone:

“Studios need to learn that the majority of moviegoers are not the "Woke" Army. The majority of the latter do not even believe in Capitalistic ideals, so they would not go watch a movie five times to the cinemas, maybe not even once. And when you pander to these people and at the same time piss off everybody else, this happens.” (Bloody Disgusting)

“What's that? A feminist PG slasher tanked at the box office? Wow - I'll bet nobody saw that coming!!!” (Bloody Disgusting)

“Black Christmas was terrible, but I’m only saying that as a straight white man. The bisexual woman of color in me loved it, and is planning on seeing it a second time.” (Entertainment Weekly)

“Woke Christmas bombed? Shocker! How moronic to think slasher movie fans wanted a watered down, woke movie. Rated PC-13 for no gore but lots of preaching about the patriarchy!” (Entertainment Weekly)

One of the most common criticisms of the film is that its thematic messaging is too heavy handed or on-the-nose. (Certainly there’s precedent in the genre.) As several advocates of the film have pointed out, subtlety was hardly the point of the new film, which both Takal and Wolfe have stated: 1) is intended for pre-teen girls, 2) was scripted at the height of the Brett Kavanaugh hearings; and 3) went into production as blacklisted celebrity figures such as Louis C.K were slinking back onto the scene following their own allegations of sexual misconduct.

The references to political correctness, to being woke, to “pandering to these people” (emphasis mine) are surprising considering that the politics of the new film are essentially in line with the 1974 original. What is sadly less surprising is the gendered nature of these attacks - both who is primarily responsible for them (men) and who is being attacked (women). Originally this article was going to be co-written with a notable female horror critic, but she recused herself after being targeted by online mobs over this film.

FANGORIA asked Wolfe about the curious phenomenon swirling up around the film. “One of the reactions you get when women make horror movies with a clear, direct message about misogyny is a defense of the canon's purely apolitical history. That's dead wrong,” Wolfe says. “For centuries, both men and women have been couching feminist ideas in horror literature and film, attempting to make the narrative palatable for those who may disagree that women deserve equality. And for all that time, it has allowed people to ignore that subtext. Well, fuck it. It's 2019, and I’ve been saying subtext is dead for the past three years.”

Wolfe also raises an interesting point around what kind of discussion is even possible when battle lines are drawn so definitively around gender. “Now, there are plenty of women who didn't care for Black Christmas, and more power to them. We feel especially bad for them, because certain people's explicit misogyny means they may have to stand up for a movie they didn't even care for. It's a toxic circle, one I've unfortunately found myself in as a critic.”

Wolfe recounts a litany of absurd “criticisms” that have been lobbed her way: “Men telling us the movie inspired them to cheer on rapists. Men calling us ‘cunts.’ Men shouting into the void that this relatively small $5 million movie ruined their Christmases. Men literally making red hats with the slogan ‘Make Horror Rated R Again’? (These reactions from) predominantly cis men on the internet are what I would call shocking if we weren't so bored by them already.”

One wonders what these vocal assailants’ goal is; if it’s to silence the filmmakers, well, they’re the ones being talked to by the media about these tantrums. And while one can be clear-eyed about the film’s actual shortcomings -- Wolfe and company have been very candid (in our own pages, no less) about the rushed nature of the production -- the message remains a valid and important one. As Wolfe says, “We live in a cartoon world with cartoonish villains, and yet there are very real people being hurt, and our aim was to present this as accurately as possible. As a woman who was raped in college and whose rapist continued teaching students like me, I know firsthand how surreal something like our protagonist's assault can seem. It is, as I've said before, cosmic horror, something seemingly inexplicable in its power, endurance, and indifference. I also know that I survived with the dark wit of my friends and their boundless support.”

Wolfe departs with a mention of the film’s opening scene, a telling moment that works as a kind of Rosetta Stone for the film that follows. “A masked assailant appears and disappears with ease. A woman does everything she's told to do for self-defense and yet still can't escape him. Finally, she is met with the possibility of her fate. Her reaction? ‘I'm sorry. Whatever I did—’ She apologizes. She internalizes that it's her fault. She uses it as defense, but it's not enough.” Pivoting to her own encounter this week with anonymous villains, Wolfe adds, “we refuse to apologize for having a part in something that's sparked so many thoughtful, passionate discussions about the role of horror films to instruct even as they entertain.”

What the discourse surrounding the new film’s release has confirmed is that there remains an unfortunate gendered angle to the way that horror films are received and discussed. As an ally who is beyond frustrated that the dialogue around the film is not only stifled, but discriminatory, remember that whether you like or dislike Black Christmas (or any other text), seek out opportunities to help the discussion flourish, support the people whose voices are not being heard, and challenge (respectfully, but firmly) the people who are contributing to toxicity in the genre we love.

Joe Lipsett is a freelance film and television journalist in Toronto. He has written for Bloody Disgusting, Grim Magazine and The Spool, and is the co-host of the Horror Queers podcast. Follow him on Twitter at @bstolemyremote.