From its returning cast to its triumphant score, Jurassic World Dominion is a legacy film in every sense of the phrase. A culmination of nearly 30 years of storytelling, the roster of dinosaurs for the sixth installment had to feel even more real than they ever had before.

Derek Arnold, a veteran of the recent Star Wars movies (and the performer behind many of that saga's iconic crop of creatures), took his talents to Jurassic World Dominion. Here, he was able to bring these scaly, toothy creatures to practical life as "Puppeteer Captain" for the film. Arnold joined us for a chat to take us behind the scenes of bringing this creatures to life.

Growing up, were the Jurassic Park movies something that inspired you as a creative?

I absolutely love Jurassic Park. I was ten years old, the perfect age, when I first saw the original one and became obsessed with it. I was able to work on Jurassic World: Fallen Kingdom as a general puppeteer, and I thought I had peaked.

We were in the back of the truck, operating the velociraptor for some scenes, and the crew had to keep telling me, "Stop hugging the raptor!" I was getting the oil from my hands onto the latex of the puppet, but I couldn't resist! Fire me! I was going to hug the raptor.

Let's start with your official title for the film: "Puppeteer Captain." What were your responsibilities on set?

It was myself and Damian Farrell as puppeteer captains. We were there every day. Our job was to put the teams together and make sure the puppets worked as they were being built, as well as on set.

We would talk to the mechs and the fabricators and say, "You need to put a rod here, and you need to do this differently because this is how they will film it."

Then we had to communicate with production to let them know what we needed on set. We would feel so bad sometimes because the set decorators would build these stunning, beautiful sets, and then we would come in and say, "Well, you need to drill holes here and here, and this wall needs to come down, so we can fit all of our puppeteers."

In the Malta scene, for the underground market, it was a beautiful set. But we had 22 puppeteers operating 14 practical puppets. It was a logistical brain bomb, but it was our job to make sure it ran as smoothly as possible.

There's a certain fluidity and personality that we expect from Jurassic dinosaurs, going all the way back to the 1993 original. What was the process for you and the team to bring these creatures to life?

We were really lucky. I was first brought onto the project to inspect the Dilophosaurus. Colin Trevorrow (Director) and John Nolan (Creature FX Supervisor) wanted to try and see if they could create a practical, walking dinosaur. There would be no visible puppeteers. Colin said, "You figure out the dinosaur. I will shoot around it."

We had a very close relationship with David Vickery, the VFX supervisor at ILM and our biggest champion on set. He was constantly saying, "How can I help you achieve what you want, and how can you help me achieve what I want?" It was a constant dialogue.

And so, for the Dilophosaurus, our first concept had all of us underneath this dinosaur, and it would be three feet above us, so we'd be puppeteering it from below. We came in November to start prepping; a year later, it was the last thing we shot for the film.

Dominion has the most practical dinosaurs on screen in the entire Jurassic franchise. What was the process and mentality for creating these practical assets?

I mean, it's all the elements: the minute that you put something physical in front of somebody, the actor comes alive. When you see one in the elements, on the backlot, reacting to the wind and the light, with the animatronic face moving, it helps everyone. It gets the whole cast and crew excited.

From an acting standpoint, there is a true eyeline. There is something they can see and touch and react to, and the director loves it. From a technical standpoint, the entire crew loves it as well; you no longer need to guess because there's a dinosaur right there.

Are there any other challenges that were unique to a Jurassic movie? Are there any creatures that stand out to you looking back?

Like I mentioned earlier, the Dilophosaurus was a massive undertaking because, in the movie, there are three of them in a scene. We only had one puppet. We spent so much time figuring out how to hide it and shoot it… and then we had to do it all over again.

It wasn't like picking up a puppet and moving over a few feet; it took the better part of an hour to just move to its next mark.

Of course, when we moved the Dilophosaurus inside the bullet train for the scene with Dodgson near the end, we had to fit ten puppeteers, the actor, and our equipment underneath that set, so it wouldn't be seen.

When you scale all of that down to, say, Beta, the baby raptor, those scenes became just lovely. That kind of stuff is challenging because myself, Damian, and Claire Roi Harvey were puppeteering, with four other puppeteers controlling just the face. All of that becomes so nuanced, with micro-movements and eyelines.

You can have something as big as the Giga and as small as Beta, but both bring infinite challenges. 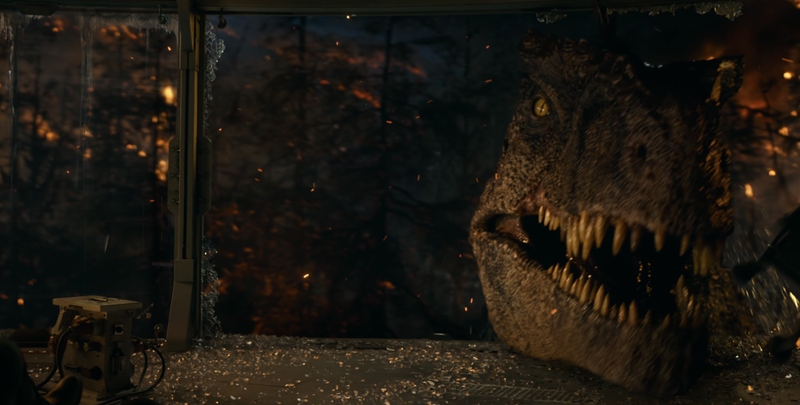 Let's dive into the Giganotosaurus. What was needed from that creature's performance?

It was a joint venture with CFX and SFX. They built this huge hydraulic rig to lift the dinosaur up and move it forward. The puppetry elements were the mouth opening and shutting, as well as the control of the neck, head, and body. We had five puppeteers on the face, and it was such a long build, again taking a better part of a year.

As soon as we got to set, it then became extraordinarily technical: we created these circular parameters so that, no matter what, the Giga couldn't go further than a certain point. It was really methodical, working hand-in-hand with different departments to make sure it was all safe first before we got to have our fun.

The Giganotosaurus puppet could really hurt or kill somebody because of its scale. It got so crazy, but it was so important to be safe because you're essentially flying a truck around on a rig.

What was it like to culminate your journey with this franchise, as a fan?

It was so boring. So dull. The worst. (laughs)

You know, you walk onto the set of a Jurassic Park movie, and you immediately feel the huge responsibility. It makes you work harder and better and want to prove to yourself and to others that you can do this.

And now I can look back on it and go, "Oh, my goodness, I was there. That was crazy."

For more on the practical effects of Jurassic World Dominion, be sure to pick up FANGORIA Vol. 2, Issue #15, featuring an interview with John Nolan, mentioned in this piece, and his fantastic team.