A PLACE AMONG THE DEAD: An Interview With Juliet Landau

The writer/director/producer opens up about her new film. 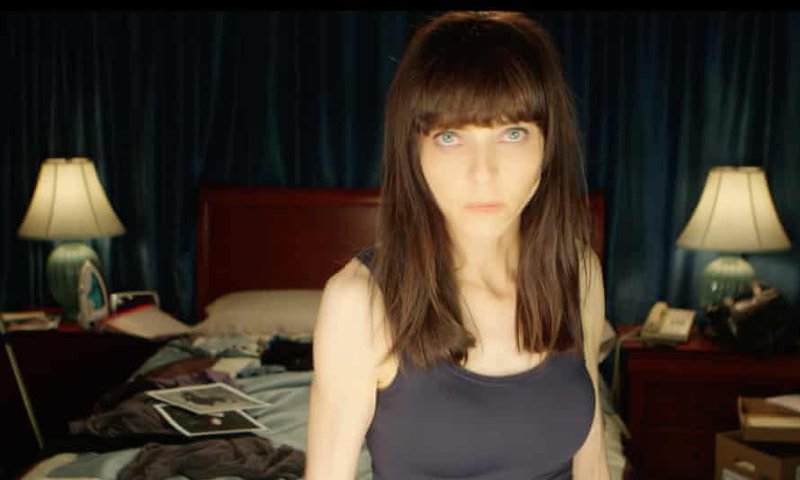 In A Place Among the Dead, young women in Southern California are being murdered, their corpses left in gruesome yet artful tableaus, with elaborate paintings of the victims in states of metamorphosis. The culprit may be the legendary vampire Darcel, or a serial killer imitating the mythical figure.

Besides being female and attractive, the dead have something else in common: past trauma that left them vulnerable to the attentions of a predator. Jules, who fits the victim profile, is determined to track down and put a stop to Darcel, but she is dangerously in denial of her own motives.

Jules is the alter ego of filmmaker Juliet Landau, who not only plays the character, but also directed the film, which she conceived, wrote and produced in collaboration with her husband, photographer/cinematographer Deverill Weekes. Weekes costars as Jules’s spouse Dev and serves, along with Akis Konstantakopoulos, as director of photography.

Something that may come as a shock to film buffs is an opening montage of family photos showing Landau as a child with her parents, Martin Landau and Barbara Bain. The pictures are accompanied by “Dad” (voiced by Harry Groener) and “Mom” (voiced by Dawn Didawick) poisonously telling their daughter that she is uninteresting, unattractive, unworthy of attention.

Speaking by phone, Landau says this aspect of A Place Among the Dead is all too real. She and Weekes started thinking about the fact that vampirism was “the perfect metaphor for the ultimate narcissist probably a couple of years ago. Narcissists have an inability to self-reflect, and vampires have no reflections. We wanted to use genre for a number of reasons. First, to make an entertaining movie. Also, to lull the audience into a sense of safety to explore unsafe and radical ideas. Deverill and I both come from this background, and we wanted to tackle something that society is reticent to discuss. [A movie about] a being that drains all and leaves its prey with nothing was a great way to explore narcissism.”

A Place Among the Dead has a variety of tones and styles – documentary, where Jules interviews a slew of experts on vampires; realism, in Jules’s investigation of the murders; and surrealism, in Jules’s nightmares and fugue states.

Landau explains, “For a lot of the movie, you’re inside Jules’s POV. We wanted to invite the viewer to become the participant, not just sit back and be the spectator. So, some of the sense of being off-balance and disoriented is a device that we use to show what it feels like when you’re in the orbit of a narcissist, how unstable it feels, like there’s no ground, like you’re losing your mind. And the sense that you’re losing yourself, bit by bit – how harrowing is that? Jules thinks she’s going on this quest to help these other girls, and in fact, she is really wanting help herself. She is going after the unwinnable parent, hoping it’s going to be different, but in fact, it’s worse and worse as she’s going after it.”

For Jules’s voiceover thoughts, Landau says, “Dev and I talked about the fact that we had never seen a film where the voiceover sounded remotely like the thoughts running through our minds. If you come from this kind of background, you let these negative thoughts and voices run you, and lead you to destructive choices. The whole point of the movie is that there is a different way. Hopefully, I am much more conscious than Jules. In my own life, and also in Dev’s life, we’re both, and as a team, making constructive, positive choices for ourselves now. But we didn’t for a long time, and that really was part of the drive in making the movie, was about looking at that, looking at how we get primed to behave one way, and unless you really stop and take stock, you repeat that.”

To enhance Jules’s disorientation, “We employed blurs and static whenever we’re near [the killer]. We based a lot of the ideas on M. Scott Peck’s book, People of the Lie. Some of it is religious, which doesn’t speak to Dev and I personally. But he has all these case studies, and he talks about the idea that when you’re around people like this, that you feel often confused and a sense of revulsion, and that you have a loss of clarity, you feel like you’re disappearing, and you do lose yourself bit by bit.”

Different aspects of A Place Among the Dead have different appearances, Landau points out. “We wanted a juxtaposition, so that the look of the film was beautiful, dreamlike, enticing, in contrast to the dark psychological terror. Also, there are two color palettes in the movie. There’s the main color palette, and then there’s what we started referring to as inside Jules’s head. That has a more yellow tone to it, and when those sections come up, we also use an echo sound design element. We did something like 1,500 screen grabs with the color correction before we went into [the post-production facility] FotoKem and worked with the colorist to create these two very distinct color palettes that would fit together.”

Darcel’s paintings of his victims, as well as the film’s promotional artwork, were done by artist Mark McHaley. Landau had met McHaley when she was starring in a stage production of Danny and the Deep Blue Sea, directed by Henry: Portrait of a Serial Killer helmer John McNaughton, for which McHaley had crafted the posters. “We knew when we were scripting it that we wanted Mark to be a part of the project,” says Landau.

To get the positioning of the corpses right, Landau says that she and Weekes worked in their home, “with me lying down in our kitchen, and us taking pictures, looking at what we thought would work best for the crime scene photos. Once we figured out the shape, we shot those, and then we sent some of that to Mark to look at, and pictures of each of our [actresses playing victims] for him to work off of.”

A number of makeup effects artists were on Dead. “Rachel Kooyman [Bone Tomahawk, Starry Eyes] was our department head of makeup and hair,” Landau says. She is extraordinarily talented at both beauty and makeup effects. Kevin Haney [The Mandalorian, Legion FX series], an Oscar-winning makeup artist for Driving Miss Daisy, did the prosthetic makeup. And then we worked with Todd Tucker [a co-producer on the film whose credits include Ouija: Origin of Evil] for other crime scene stills that are shown in the movie, and then he did the blood spatter and the defensive wounds, based on, if this is where the person had been attacked, this is what would happen.”

Landau acknowledges that the vampire in A Place Among the Dead is almost completely unlike the engaging if deadly vamps of the Whedonverse. “I loved my time on Buffy, and the fan base is extraordinary. They follow all of your other material and projects, and there’s a character in A Place Among the Dead, Alex, who recognizes my character from Buffy, and has an idealized and glamorized version of vampires.”

Of the faux interviewees, Landau says, “They were all incredible. I think part of it was that, with each of them, we gathered their own views of everything that we’re talking about. In a way, those interview sections are the Greek chorus that delineate the chapters in the movie. So, we worked with each person in capturing their own ideas, and then making it in language that would work for the movie. We talk to them about the nature of evil. The movie looks at the whole spectrum, from the systematic [draining] of spirit and life force, all the way to the heinous snuffing of life.”

Oldman’s mother Kay has a role as a nun. “Originally, Amy Jennings, who plays Detective Sal, was going to play the nun,” Landau notes. “We had scripted Sal based on Sal LaBarbera, who was twenty-five years second in command in South Central Homicide, and consulted on the movie. Then when Amy came in to read for the nun, we thought, ‘Why does Sal have to be a man? She’d be perfect for this.’ So, once we cast Amy as Sal, we were trying to figure out who we might want to use for the nun, and we thought of Kay. Kay always had wanted to be an actress. It was her passion. then Gary got very excited about it. He actually drove her to and from set, and was running lines with her. It’s really touching for us, because Kay has since passed away, and we got to immortalize her in A Place Among the Dead, and she was doing something that she had always wanted to do. She’s unbelievably expressive, much like her son.”

The funding for A Place Among the Dead was raised by Landau and Weekes from private investors. Shooting took place in Los Angeles and Santa Barbara, where the action is set, as well as some in New Orleans and London. Landau says the entire shoot was a positive experience. “The only thing that we did that I would never do again, and not recommend to any filmmakers, is that we raised three-quarters of the budget, and decided before raising the rest of the money that we would shoot three-quarters of the movie. So, there is a point where you have three-quarters of a movie, and you’re like, ‘What if we don’t raise the rest of the money?’” she laughs. “We did do it, but it caused some undue stress.”

Landau and Weekes are currently working on their nonfiction vampire documentary, The Undead Series. This has real interviews with all the A Place Among the Dead luminaries, as well as Tim Burton, Willem Dafoe, Dark Shadows veterans Lara Parker and Kathryn Leigh Scott, and more.

Landau’s father passed away in 2017. She says she does not know whether or not her mother has seen A Place Among the Dead. “I stopped engaging with my family twelve, thirteen years ago, as did Dev, and our lives just bloomed, once we made that choice. We knew that we were going to get some people saying, ‘How dare you!’ When you’re talking about stuff that bucks the Fourth Commandment, you’re going to get a lot of stuff coming your way,” she laughs.

A Place Among the Dead is being released through Modern Films. The official opening has been pushed back from late 2020 to the first half of this year, partly because of the extraordinary response to a number of virtual screenings. Zoom Q&As with the audience, Landau, Weekes, and other Dead cast, crew and advisors have gone as long as four hours.

“People keep talking about the movie,” Landau relates. “We’ve had so much repeat audience – some people come to every single one, we have many people that have come to five or six of them. People have been sharing the most profound, personal stories.”

Landau believes that people respond to Dead’s exploration of psychological and physical damage both because of individual histories, and because of the state of the world. “There has been such an escalation in cruelty, narcissism, evil actions. And whether it is familial, or it’s a spouse, or an ex-boyfriend, or ex-girlfriend, or a boss, or a coworker, or a friend, or our world leaders, this really is the issue of our time.”