"Born Ready For Those Possession Scenes": Talking With THE DEVIL MADE ME DO IT's Julian Hilliard

The budding scream king opens up! 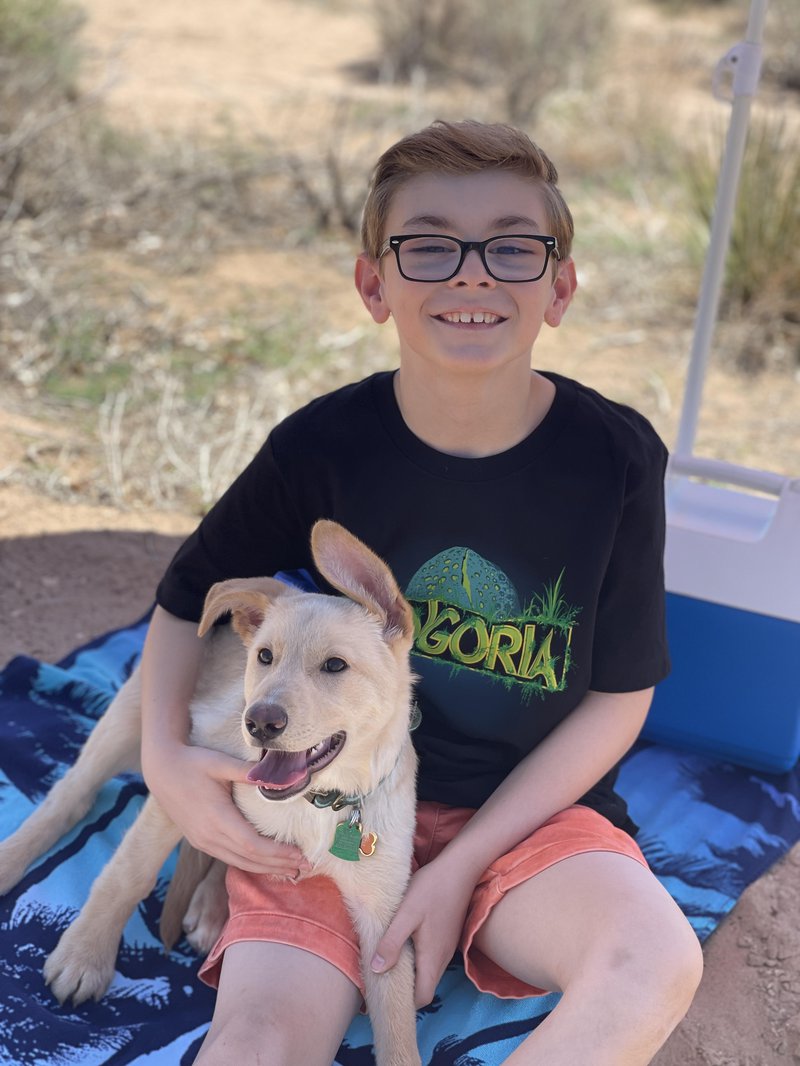 Julian Hilliard can’t catch a break, but he likes it that way. His characters have been occupied by demons, plagued by ghosts, and mutated into bio-fused Eldritch abominations. This year alone, he took a blood shower and survived an attack by a haunted waterbed while the cameras rolled. Even with the chainmail of superpowers and Marvel NDAs as Billy Maximoff in this year’s WandaVision miniseries, there’s an eventual catch. Even when he survives, his roles rarely conclude with anything close to a happy ending, but young master Julian’s suffering has its benefits. The ten-year-old has worked with Mike Flanagan on the miniseries The Haunting of Hill House, where spectral sightings didn’t stop the Dallas actor from working on his Minecraft builds with costars between takes. In Greener Grass, indie satirists Jocelyn DeBoer and Dawn Luebbe featured Hilliard as the precocious Julian, an unfortunate pawn in his mother’s quest to conform to the suburban ideal. He even gets to call Nicolas Cage “Dad” before a meteorite ruins the fun in Richard Stanley’s Color Out of Space. Through it all, his expressive gaze and natural screen presence raise the emotional ante for anyone brave enough to peek through their fingers at the screen.

Over the course of just three years, Hilliard has risen as a fresh new face of dark fiction, most recently in Michael Chaves’ latest entry in the Conjuring-verse The Devil Made Me Do It. The third direct sequel to James Wan’s The Conjuring, this installment follows fictionalized versions of paranormal investigators Ed and Lorraine Warren as they tackle their most sensational case: the trial of Arne Johnson and the first known demonic possession defense in the North American judicial system. The story comes out swinging with a frantic exorcism sequence, starring a contorted, hissing Hilliard as David Glatzel, an adolescent whose diminutive frame is twisted and bent at the whim of its supernatural invader, triggering a separate possession and murder. FANGORIA spoke with Hilliard about the film and his career thus far.

In horror, your characters have battled ghosts, dealt with an alien invasion, and been possessed by demons, but you seem very cool with it. What draws you to the spooky stuff?

I’ve kind of liked horror and monster stuff my whole life. I also love science and sci-fi. But it’s not spooky when you’re filming; it’s fun make-believe. It’s like fantasy. Plus, it’s fun seeing the audience react to these things happening to my characters.

I’ve read that your favorite scary movies are A Quiet Place and The Birds. Have you gotten a chance to see the new Quiet Place movie yet?

I’m too loud for that universe. Do you think you’d last long in the world of A Quiet Place?

If I had to, but I really don’t know. I like to play with my toys loudly. That growl in Conjuring is my everyday noise and would be my kryptonite.

What was your earliest memory of professional acting?

I remember one picture in my head about a Home Depot commercial I did. In a film called Never Goin’ Back, I remember pouring syrup on the waitress’ foot. It was very funny and the reaction, after we cut, was everyone laughing out loud. Especially the actress playing the waitress [Maia Mitchell]. Most of my first memories are from The Haunting of Hill House. I remember playing and talking with Violet McGraw [who plays young Nell] and Olive Abercrombie [who plays Abigail] a lot. I still keep in touch with them. I got to see and play with Olive recently, too! We play Minecraft together.

You gained a lot of attention when you dove into the role of young Luke Crain in The Haunting of Hill House, working with genre master Mike Flanagan and a stacked cast. Were there any big lessons you learned while working on that?

If you are filming in a treehouse set, warning… try not to toot. Toot is a funnier word than fart, but I was farting like a big balloon letting out air, if that makes sense. The crew was laughing and waving in front of their noses. It was hilarious. Mike Flanagan is a brilliant director. He was kind, open to new ideas, and really good with kids.

Have you ever had a ghostly encounter yourself?

No, I have not. And I hope not to ever! Also, hope I’m never possessed, or fused, or turn into a dog, either [laughs]. 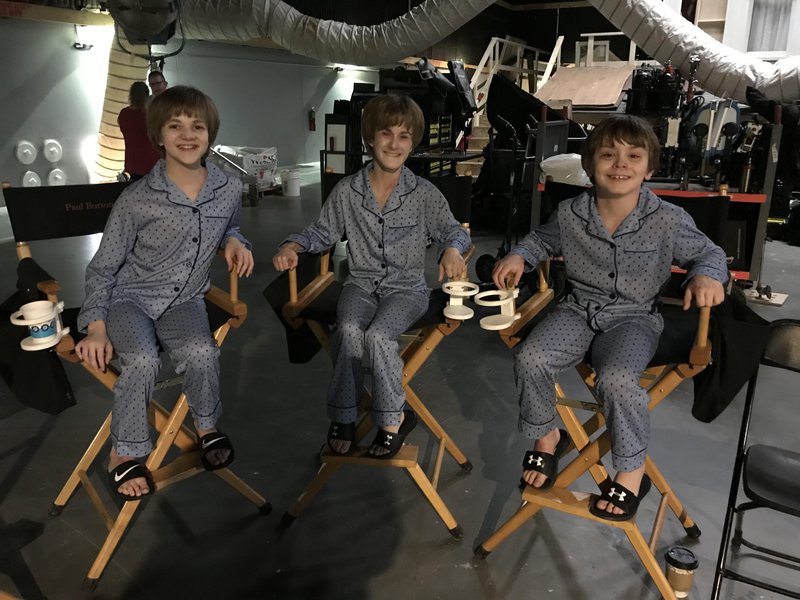 It’s common for younger actors to be shown around the set to see the filmmaking process so that they’re not freaked out by the more intense scenes they’ll be shooting. I know that you’ve gotten to do this on several productions – is there another department that you find most fascinating, like makeup or stunts?

On The Haunting of Hill House, they showed me everything before filming. My favorite was the makeup SFX, where I got to see all the prosthetics and some of the gory stuff. It wasn’t scary at all, just honestly very cool to see them make it. Down in the basement scene, there was a rat, that I think was named Mr. Green, even though it was a female. It was fun to meet and look at a rat up close, because I’ve never seen one. Mr. Green was a good scene partner. On my first day, at the studio for Conjuring, I got to meet the amazing Emerald Gordon Wulf. She’s the contortionist who helped with stunts in the opening exorcism scene. She’s really awesome and I still can’t believe I got to see her bend back when practicing. I don’t know how she can do it. The stunt team was so great. Molly Miller and Sierra Heuermann also did stunts for my character. Their work was fantastic and really enhanced my performance.

It doesn’t exactly sound like you’re traumatized on these sets – more like a big Halloween party, where monsters are around but you’re still having a good time. Is that close to how it feels for you?

Exactly! I’ve always loved monsters and dressing up. Halloween is my favorite holiday. I’ve never been scared on an actual set. The actors playing scary things are nice when you meet them. Now, don’t think it’s not scary when the music and special effects are added. That makes it scary for the audience. [Sinister laugh.]

Following Hill House, you did Jocelyn DeBoer and Dawn Luebbe’s comedy Greener Grass, in which you played a boy named Julian who wears a Purple Heart and angrily calls his mother a school before his life changes dramatically. I’m wondering if you can tell me about your approach to a funny but strange script. Do you break character and laugh more than you would on a more serious story?

On that one, we played it straight like it was real. So, you have these funny lines, but you say them like they’re normal. That cast was amazing, and it was a lot of fun. Now on WandaVision, I broke a couple times, because Lizzie [star Elizabeth Olsen] is really funny. It was in the Modern Family episode. She was so funny in it.

In addition to the features, you’ve done a fair number of miniseries and shows, from Hill House to Penny Dreadful: City of Angels, to WandaVision. Do you have a preference between doing films or shows at this point?

I honestly kind of like TV a little more, because you get to spend more time with the cast, crew, and friends you make. Movies are great, too, because sometimes you get to travel around the world. Like, on Color Out of Space, we got to film in Portugal. FYI, Sintra is beautiful. It’s cool meeting people from other countries, too, and trying the food.

Your latest acting credit is in The Conjuring: The Devil Made Me Do It where you play possessed 8-year-old David Glatzel. David screams and twists himself up more than the Crooked Man of the second Conjuring film, even spawning a backbending #ConjuringChallenge on TikTok. That had to be exhausting to shoot – did you have a lot of takes to showcase that T-rex roar of yours?

I slept well those nights, but honestly it was the most fun scene to shoot in that film. I’ve been making those T-Rex roars since I was two, so I was kind of born ready for those possession scenes. It was awesome getting to flop on the table, growl, and stop Ed’s heart. [Laughter]

I’ve seen that you’re a dinosaur expert and want to work on a Jurassic Park movie in the future. I’m curious to know if there’s a specific dino that you’d want to face on the big screen?

Definitely, a velociraptor. That’s my favorite dino. Also, I like T-Rexes, of course, and ankylosauruses. I’d also like to create a hybrid dino that would mix two pterodactyls and a velociraptor. It could have three heads like a Cerberus, and it could fly. That would be so cool and scary!

Looking forward, are there any career goals you hope to accomplish in the next year or so?

Easily, the answer is more Marvel and a Jurassic World-type film. I also would enjoy voicing a LEGO film. Did you know that I make my own LEGO movies? I hope to work again with some of the directors I’ve worked with before. That would be cool.

Thank you so much for taking the time to talk with me, Julian. It’ll be a joy to see what you do next.

Thanks so much. I appreciate your great questions and hope you have a great year! 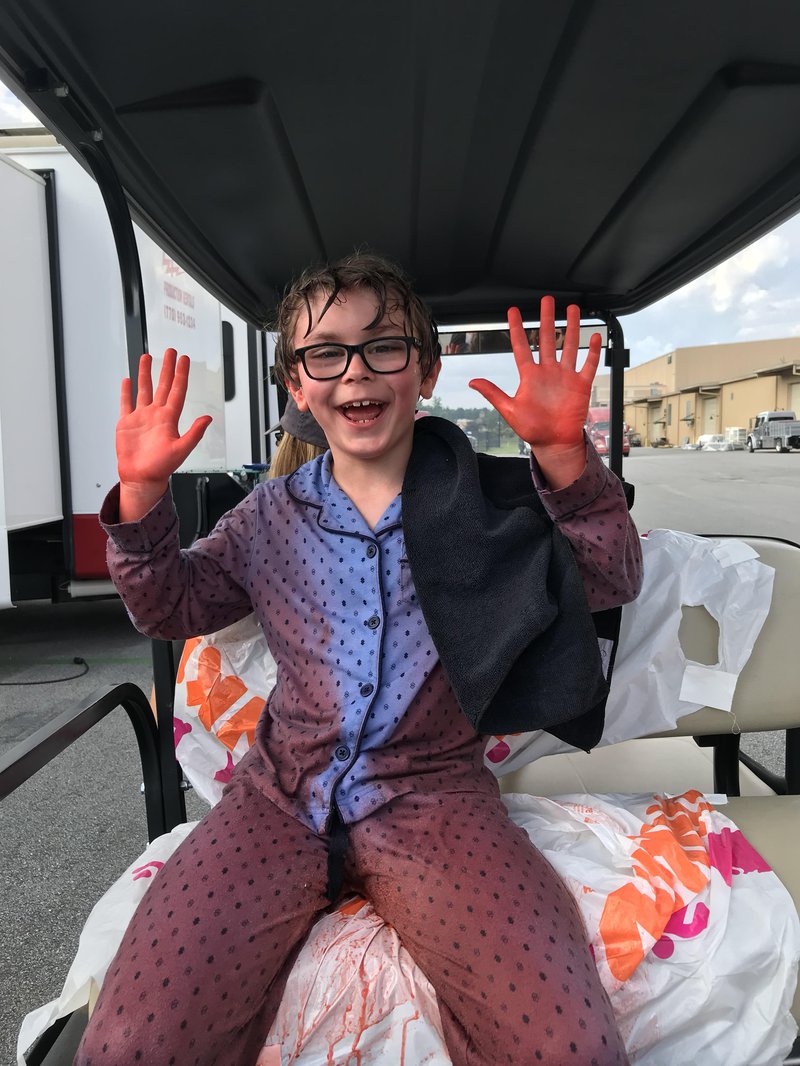