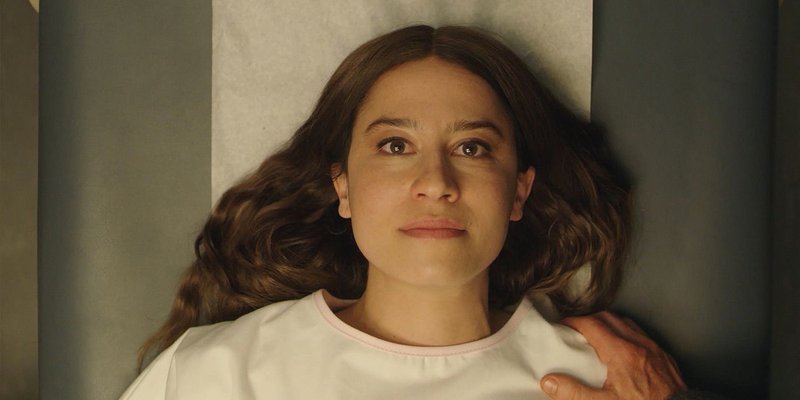 Over the course of a two-decade career in television, writer/director/producer John Lee has been responsible of some of the medium’s most confrontational, outrageous shows, particularly the cult favorite Wonder Showzen. The dark side he comedically explored in those programs now finds full horrific flower in the movie False Positive, which premieres tonight at the Tribeca Film Festival ahead of its exclusive release on Hulu June 25.

Scripted by Lee and the movie’s star Ilana Glazer, with whom he previously collaborated on the popular series Broad City, False Positive is about Lucy and Adrian (Glazer and Justin Theroux), a Manhattan married couple who have been trying in vain to have a child. Salvation appears in the person of renowned fertility specialist Dr. John Hindle (Pierce Brosnan), whose treatments result in Lucy successfully becoming pregnant. Yet what should be a happy occasion develops a dark side, as Lucy makes some unsettling discoveries about her condition.

Lee confirms that making the transition from his particular brand of comedy to a more seriously intended scare story wasn’t much of a stretch. “I went from Wonder Showzen to Xavier to The Heart, She Holler,” he tells FANGORIA, “and The Heart, She Holler has a lot of Twin Peaks influences. I have always loved any time that I can make something that has a push in to something mysterious and then a pull back. I’ve always understood that, so I didn’t feel like [making a straight thriller] was difficult at all. I just felt like I’d never had the opportunity to fully embrace or communicate that in any way, though this script had its genesis about 15 years ago, so it’s been floating around in my mind. It has probably made little peeks into my other work; you can see it elsewhere in anything that I’ve done.”

Considering that False Positive has been percolating in Lee’s mind for so long, the film that has emerged feels quite current in its concerns, as it deals with Lucy’s struggles to be heard and helped in a male-dominated society. The co-writer/director notes that societal issues have never been far from his previous work, even at its craziest. “I mean, look at Wonder Showzen; it deals with injustice, racism, the patriarchy. Those things never leave; they’re evergreen, so that show still resonates with people, because they’re always going to exist and always have. And women not being treated as human beings, but as props, that’s always going to be around. A healthcare system that doesn’t support the individual? It’s still happening. So when you make a movie or a series that’s about an institution, that’s how you make sure it resonates, and that was very important to the writing of this.”

False Positive, he adds, “started as a 60- or 70-page tone poem I wrote with Alissa Nutting. Then Ilana took it on and read it and loved it, and was like, ‘Hey, let’s make this a movie.’ She added a lot of structure and story and character. She’s a very proactive kind of person, and I’m also a politically proactive person, so we wanted to make sure that was part of the film. It’s not an issue movie for us, but it is a movie about issues.”

Its key issue hit home for Glazer when she recently became pregnant herself – which, Lee confirms, wasn’t a publicity stunt.

“That would be great if we faked it!” he laughs, before noting that his own experiences with fatherhood informed the creation of False Positive. “Part of the genesis of this movie was that my wife and I were trying to get pregnant, and we had some fertility issues. We now have two kids, two daughters, and as it turned out, I was the only parent on [the False Positive] set. So when you see those babies swaddled, I swaddled them, because no one else knew how to! And when they were crying, people on the set were getting stressed out, and I was like, this is what babies do – they cry! My kids are way past that – they’re preteens – so I’ve had a lot of experience, and the genesis of this movie is very personal to me. I think when Ilana first read that tone poem, that kind of vague script, she connected with those feelings.”

Look for more on False Positive at this site closer to the Hulu debut!