Exclusive Interview: Jeffrey Combs Enters A DARK HOUSE On Film And Brings Poe To The Stage With NEVERMORE 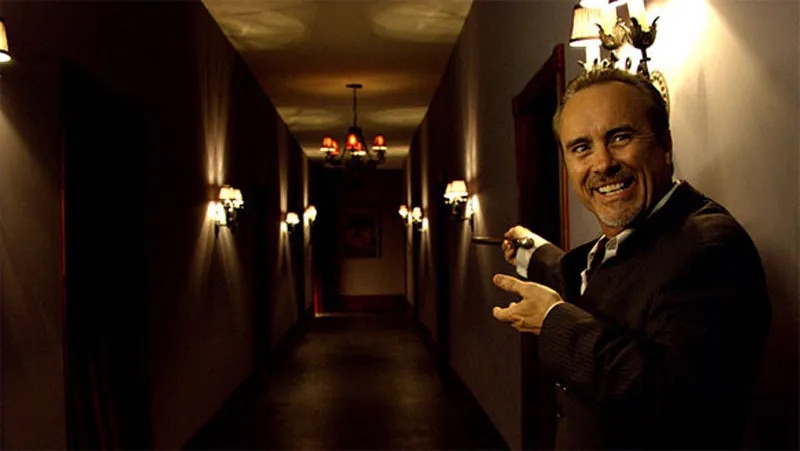 Editor's Note: This was originally published for FANGORIA on September 23, 2010, and we're proud to share it as part of The Gingold Files.

Dark House, part of the eight-title FANGORIA FrightFest line on DVD from Phase 4 Films and via video-on-demand, casts Combs as Walston Rey, an impresario of the macabre. “I go into towns, find old Victorian houses and convert them into fright houses,” he says, “with holograms and lasers and sound effects to make them as immersive and realistic as I possibly can. The backstory is that the last few I’ve done have not quite measured up to expectations, so on this one I’m really going to step up my game so I can maintain my status as the P.T. Barnum of the horror-house circuit, if there is one. I’m pretty positively full of myself; I’m a real winning guy.”

Combs revels in the flamboyant opportunities afforded by the character from the moment he crashes an acting class, seeking new performers to replace a group who have quit. He recruits the aspiring young thespians for a preview night designed to show off his new “Dark House” attraction to a couple of influential reviewers. “What I don’t know, but the audience knows, is that one of the girls, when she was little, was traumatized in this house I’ve taken over,” the actor explains. “When she hears where this is gonna be held, she talks the rest of them into it because she feels she has to face her own personal demons—so she has a personal agenda besides the money. And what none of us know is that the house is still deeply possessed by a hideous woman who used to run the place. She ran a foster home for kids and did awful, unspeakable things to them. So my gimmicks and holograms start acting up, and things start happening that I didn’t program. Then we realize we can’t get out, and it becomes not so fun for us!”

Dark House, which also stars Meghan Ory (as the troubled Claire), Matt Cohen, Shelly Cole, Danso Gordon, Ryan Melander, Bevin Prince and Diane Salinger as the villainous Ms. Darrode, was scripted and directed by Darin Scott, who has previously worked with Combs on 1998’s Caught Up and (as a producer) 1994’s Love and a .45. “I was his first choice,” Combs recalls, “and as always happens, the producers started overthinking things and wanted to test the waters to see what kind of ‘name’ they could get. But it ultimately came my way, and I’m really glad it did, because it’s a juicy part and a really good film. What Darin did was basically take the same old formula and make it fresh. How many horror movies have you seen where it’s a group of young people stuck in a house and, ‘My God, what are we gonna do?’ In this case, it’s about the execution, how Darin did it, that really puts this movie above a lot of others.”

And Scott did it on a limited schedule and budget, though Combs notes, “Not too little of a budget, because, dude, some independent films are shot in warehouses, and we were fortunate enough to be on a soundstage out in the Santa Clarita Valley, next to where CSI is shot. It was, if not the same stage, at least right next door to where I did House on Haunted Hill with Bill Malone. The shoot was a hell of a lot of fun; it went very smoothly and we had a great DP [Philip Lee], and it put me together a lot of really good, well-cast young actors.”

This is one of a number of recent genre films that have placed Combs amidst an ensemble of up-and-comers, an experience he greatly enjoys. “It has been sort of a weird journey, because in my mind, I’m still one of them,” admits the actor, whose young daughter Natalie has a small role in Dark House. “It’s strange to turn around one day and go, ‘Hmm, I’m a veteran.’ It’s kind of a mix of gratitude and fun, and surprise. It’s interesting—younger actors these days have been so much more exposed to so many more movies, because they have so many outlets. When I was growing up, it was Saturday matinees or what was on the 10 channels, or your own imagination or books. Now, kids are bombarded with it. Their skill sets and their library of references are much vaster than in my generation, certainly.”

Fango is speaking to Combs at Montreal’s Fantasia International Film Festival, which he’s attending with director Stuart Gordon and writer Dennis Paoli for a 25th-anniversary screening of Re-Animator—and, even more importantly, a pair of performances of their stage production Nevermore. A one-man show in which Combs plays Edgar Allan Poe in his declining years, addressing a group of literary peers (for whom the audience essentially stands in) and reading some of his most famous works, Nevermore is a tour de force for Combs, who powerfully and sometimes quite humorously disappears into the persona of the famed Gothic author. Following a significantly extended run in Los Angeles, a stop in San Diego and the two stagings in Montreal, Nevermore will next be performed at Austin, TX’s Alamo Drafthouse as part of Fantastic Fest.

“That has gone beyond anything I would have expected from it,” Combs says. “I fully committed once I was in, but I was reluctant to take it on at first because it was so daunting—not just the sheer load of memorization, but also the responsibility of portraying one of America’s iconic literary giants. It was a little frightening at first, like, ‘Oh my God, this could just crash and burn’—I had no idea.” Certainly, though, there must have been a comfort zone in having Gordon and Paoli involved. “Yeah, I absolutely wouldn’t have done it without Stuart. Without his gentle persuasion, without him urging me and giving me confidence and positive reinforcement every step of the way. So there was a lot of reassurance there.

“But we originally had a four-week run [scheduled in LA], and it wound up going for six months,” he continues. “I never would have imagined that. And it’s funny, because it started out slowly. Critics didn’t come the first week, then one came the second week, and the review was like, ‘It’s good, you know, it’s OK.’ And then the LA Times finally came the third week, and that made all the difference. It was incredible; I was out of town, and Stuart called me and read some of the review to me, and I went, ‘You wrote that!’ and he said, ‘No I didn’t!’ So that really opened the door of awareness, and then we extended and extended again and then yet again. We opened right after the 4th of July and closed just before Christmas.”

New York City would seem to be the next logical stop, but while Combs loves that idea, he notes, “New York’s a funny animal; if it’s not right in front of them, it doesn’t really exist. They sort of think, ‘Oh, LA theater? Ha, right, sure.’ It’s not like we can just show up and put it on, and so far, no one has asked us to come and do it. It’s an expensive place to do something like that. The enthusiasm has to come from somebody who’s connected there, and the awareness just isn’t there so far.”

Nevermore represents a sort of coming full circle for Gordon and Combs, who both started out doing stage work (the former in Chicago, the latter in LA) before Re-Animator brought them together. Watching that movie, one can spot the director’s theater background in the way he blocks certain scenes with the actors, and Combs agrees that that experience helped make the movie special. “What Stuart brought to that film from the theater is a very strong sense of character and story, and I feel that can get forgotten, dismissed or overlooked by a lot of directors who are technically savvy. They know every bell and whistle and technique, every visual effect and how it works and camera speeds, but they don’t necessarily know to set up a story, how to create empathy for characters, how to set the table before you cut the lights off. If there’s anything that can be learned from Re-Animator, I think that’s it.”

While another cinematic collaboration between Combs and Gordon may be in the offing (“I think he has me in mind for some roles”), nothing’s set in stone yet, in part due to the current uncertain climate for independent film financing and production. “It’s just not really churning with activity right now, and probably anybody will tell you that. Everyone’s kind of scratching their heads going, ‘So what’s the problem?’ It’s like, if you’re in the business of making sausage, you can’t stop making sausage. And if people are not making movies, at some point there’s gonna be a demand that says, ‘Hey, we need more movies!’ and—what, there’s nothing in the pipeline? So it’s kind of a curious, a conundrum. I have things that might happen soon, but the industry is in a real bad spot right now—it’s either big, big-budget productions or really cheap, cheap, cheap stuff. And I’m not interested in that; not many people are. There’s no middle ground right now; it’s a strange thing. I’ve never seen that before.”