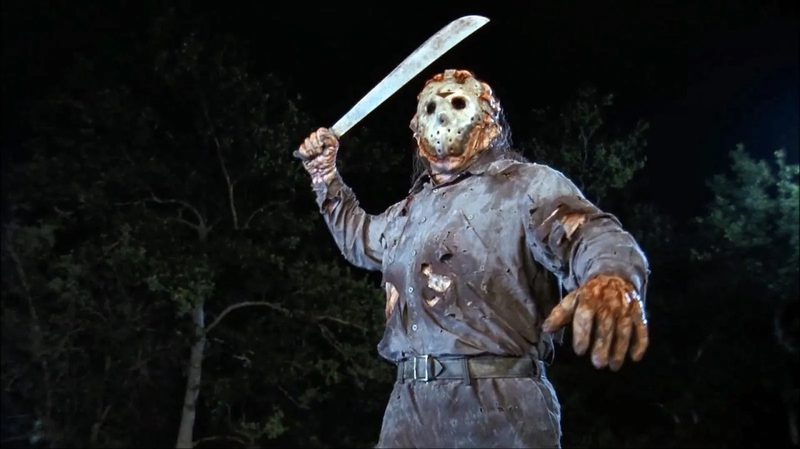 Editor's Note: This was originally published for FANGORIA on November 21, 2002, and we're proud to share it as part of The Gingold Files.

Poor old Jason Voorhees don’t get no respect on DVD from Paramount, so Friday the 13th fans will no doubt be pleased by the special editions of his last two vehicles put together by New Line; Jason X even warranted “Platinum Edition” status. For my money, Jason Goes to Hell is the far superior of the films—pulling a number of interesting variations on the mythos, as opposed to X, in which any changes to the formula are purely cosmetic—but both discs are very well-put-together and worthwhile even for horror fans with only a casual interest in Mr. Voorhees’ exploits.

On the Jason X audio commentary, director James Isaac concedes that many fans had probably seen bootlegs of the movie by the time it opened theatrically; now those devotees can own a version that not only looks a great deal better than those black-market copies but is superior to the theatrical prints as well. The movie (entirely postproduced on digital video) appeared rather murky on the big screen, but here—letterboxed at 1.85:1—it is very clean and sharp, bearing fine colors and deep, dark contrasts, accompanied by Dolby Digital 5.1 and DTS Surround sound with plenty of activity. Like Hell, this DVD allows you to “Jump to a Kill” either specifically or randomly, and also provides those who just want “the good parts” the option to watch all the deaths in sequence.

It’s telling that in both the commentary (where Isaac is joined by screenwriter Todd Farmer and producer Noel Cunningham) and the disc’s making-of documentary, there’s no discussion of any of the actors besides Jason performer Kane Hodder and cameo-ing David Cronenberg. It’s also noteworthy that the trio opine more than once that Jason isn’t scary any more, and thus attempted to imbue X with more action and humor. Their talk is detailed and enthusiastic—perhaps surprisingly so in Farmer’s case, given the references to his script being heavily rewritten. The featurette provides plenty of behind-the-scenes and step-by-step FX coverage, the most fun being a peek at the lensing of Cronenberg’s death scene.

The best X-tra, however, is “The Many Lives of Jason Voorhees,” a highly entertaining half-hour history of the enduring movie maniac. Horror-culture figures from David Del Valle to Joe Bob Briggs to even American Movie’s Mark Borchardt and Mike Schank discuss everything from the summer-camp legends that inspired Friday the 13th to the criticism the series has weathered (about which Joe Bob has the best comments). Needless to say, no footage from the Paramount Fridays is included here, but that’s more than compensated for through the use of FX sketches from the first film, bogus “news clippings” about the Crystal Lake events and articles/reviews on the movies. Hodder also appears, talking about his longevity in the role and speculating about Freddy vs. Jason (sigh).

One of Hodder’s favorite behind-the-scenes stunts (posing as an FX dummy and then “coming to life” to scare set visitors) is recounted on both the X commentary and the talk by director Adam Marcus and writer Dean Lorey on Hell. And that’s far from the only funny story on the latter, one of the most entertaining tracks on any genre disc this year. Even as they laugh about how “ridiculous” the movie’s exposition becomes, they clearly had a great time making the film and have just as much fun recalling it; noting that they were both under 25 at the time, they seem particularly amused by how much bloodshed they packed in (the DVD includes the unrated cut as well as the three-minutes-shorter R version)—though both now claim that suggestion is more effective than gore! We also learn about the original story concept (involving Jason’s evil brother!), hear a lot about the cast (the genders of the diner owners were reversed after actress Rusty Schwimmer gave a great audition) and generally hear plenty to back up Marcus and Lorey’s assertion that Hell was made by fans, for fans.

It has also been transferred with care for the DVD, whose 1.85:1 picture is rich and atmospheric, bearing solid colors, just a bit of grain in occasional interiors and another strong pair of Dolby 5.1/DTS soundtracks. The disc also includes 23 minutes of “TV Version Alternate Scenes”—not toned-down mayhem, but cutting-room-floor material apparently added to the broadcast version to make up for lost violence. The only bloodshed involved is Kari Keegan’s heroine stepping barefoot onto broken glass; it’s language, rather than gore, that had to be sanitized here (“Frig you!” “Frig me? Frig you!”). These bits, presented in sharp-looking fullscreen, contain a few nice character moments, though it’s a shame that one, involving Allison Smith’s Vicki and her boyfriend (Jonathan Penner), isn’t followed by Penner’s death scene, as mentioned in the commentary.