Exclusive Interview: Joseph Bishara Creates A Demon And Its Music For INSIDIOUS 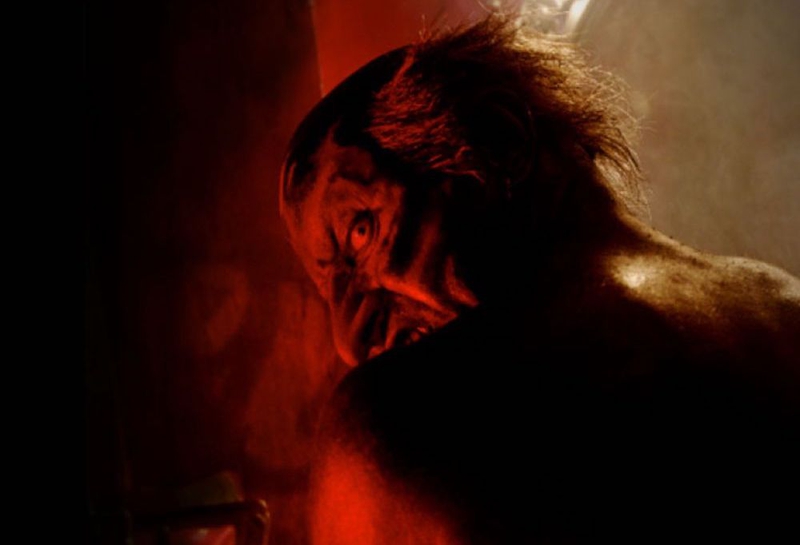 Editor's Note: This was originally published for FANGORIA on September 7, 2011, and we're proud to share it as part of The Gingold Files.

Two of the elements that helped make Insidious a sleeper hit were the terrifying visage of the Lipstick Face Demon and the scratchy, edgy score accompanying the appearances of this and other phantoms. One man was in the unique position of being responsible for both: Joseph Bishara, who played that red-face specter and created the music. With that score now announced for release on CD and vinyl on Bishara’s own Void Recordings label, Fango spoke to Bishara and director James Wan about these double-threat duties.

Bishara, whose composing credits include Mike Mendez’s The Convent and The Gravedancers and Adam Gierasch’s Autopsy and Night of the Demons, was working on Mendez’s promo trailer for the proposed feature Ov3rkill when he had his fateful meeting with Wan, who was then prepping Insidious with Leigh Whannell. And as the director reveals, he enlisted Bishara as an actor first. “Between setups, I was standing next to Joe, and I just looked at him and thought, “Hmmmm…I’m looking for someone who’s lean, thin and bald,” Wan recalls. “So I asked him, ‘Joe, if Lee and I make this movie, would you be interested in playing a demonic creature?’ and Joe was like, ‘Yeah, sure, I’ll do it.’ He actually got involved in the acting side of the movie before I got him involved in the music side, which is so ironic.”

“James said he saw me with a shadow on my face, and that inspired him to pursue the idea,” Bishara says. “I couldn’t tell you exactly what he was thinking, but I trusted that if he was asking me to do it, then he saw something there.”

Wan did have it in the back of his mind that he wanted Bishara to score Insidious, and had some specific ideas and inspirations in mind. “Until this movie, I’ve had all my films scored by Charlie Clouser, but I thought Bishara’s sensibility really fit Insidious best. We talked about it, and I temped the movie with classical scores by people like George Crumb, the Kronos Quartet—really experimental pieces.”

While there are echoes of The Evil Dead and The Shining in the jittery compositions Bishara created for Insidious, Wan reveals, “The only movie where I actually told him, ‘I want the score to sound something like this,’ was Bob Clark’s Deathdream. The Shining also took a lot of its score from those kinds of classical pieces, and William Friedkin used them in The Exorcist too—but Deathdream was the one film I wanted Joe to watch again and listen to, because the whole movie is just full of piano banging, and I really wanted that experimental tonal sound. He did such a great job; I think part of the reason why people are so on edge watching the movie is because the score is so different from what one would expect from a contemporary horror film.”

With these influences in mind, “I started writing down ideas from the script, breaking it down, limiting the instrumentation,” Bishara explains. “Early on, I knew I wanted the score to be built around a string quartet and piano—to keep the sound raw, and play with extreme dynamics, loud and harsh set against barely-there quietness. Also, I had access to what I’ve been calling the ‘rust piano,’ which a friend of mine had found abandoned in an alley behind his studio. It’s basically a gutted piano soundboard, caked with years of crust. I spent an evening recording on it, and it became a key element of the film’s sound. I sent James works in progress, but he really gave me the freedom to explore on my own. We were very much on the same page.”

Bishara recalls that Wan also had a very clear vision for the Lipstick Face Demon, though the director’s guidance in this area didn’t center on its specific physical presence. “Our creative discussions were mostly about conceptual ideas and themes: astral travel, paranormal, spiritual frameworks—such a rich landscape of ideas to play in.” When it came to creating the ghoulish figure’s visage, “James had been working with [production designer] Aaron Sims on the look, and they had me come in for a photo shoot to design over. Justin Raleigh was the key artist executing the character, along with Kelly Golden. The makeup was pretty involved, but they had the process down: nose, face, head, hair, body paint, body hair, lenses, hooves, claws—completely engulfing. It was about a five-hour process, sometimes a little more or less and constantly maintained throughout the day, then another hour or so to get out of it.

“We did a full makeup test a few weeks out,” he continues, “which was the first time the whole thing was executed, as well as my first time in the hooves. I pretty much knew right away I would need to be familiar with the demon, to be able to adapt to working around whatever James had in mind. It really grew out of a breathing pattern; I’d have to engage my core just to carry myself upright, so it organically came out of the physicality of the creature. I spent a lot of time practicing in the hooves, which informed how I would stand and move and went through every action. After all that preparation,” he adds, “when it came down to the moment, it became just about getting out of the way.”

Together, Wan and Bishara deliver some of Insidious’ best jolts and creepiest moments, from Lipstick Face suddenly appearing behind Josh (Patrick Wilson) to later sequences in which Josh encounters the fiend in the frightening netherworld known as “the further.” Originally, Wan reveals, there was also a moment revealing where the creepy figure gets his name. “I cut out one scene that I didn’t really want to cut,” he says. “When Patrick finally goes into the lair at the end and sees the demon up there sharpening his nails, initially he was putting the lipstick on his face. He puts it on his lips, then starts applying it all over his face. And I did not want to change his credit; I still wanted to refer to him as Lipstick Face Demon—because that’s just weird, you know what I mean? And not many people pick this up because we dropped that element, but the red handprint that’s on the sheet is not blood—it’s lipstick.”

Once Bishara witnessed himself and Insidious’ other creeps in action for the first time, it gave him additional inspiration when finalizing his music. “It was very cool, sitting with James at his place watching his initial edit,” he remembers. “It was a lot to process, for sure, seeing sequences play out, hearing how he’d integrated score I had given him. It definitely got my head swimming with ideas, putting together how to go from there.” When it came to scoring those moments in which he himself appears, “For a while, it actually was very easy to detach and see the demon, not me. Later, particularly closer to the actual screenings, I had moments where, yes, it was strange and fun to be working on a scare involving myself. I also recorded most of my demon sounds during the scoring; it just made sense, though I had already started working out those sounds while learning the movements.”

With Insidious achieving sleeper success, Bishara hopes to reteam with Wan on future films, and in the meantime recently completed work on Darren Lynn Bousman’s 11-11-11 and Dante Tomaselli’s Torture Chamber. For the latter film, about a demonically possessed child who leads a group of killer kids to prey on adults, “I created around 30 minutes of textural pieces, built elements of design, looped voices and screams. I just took inspiration from the script and stills; I haven’t actually seen any footage. Dante then edited that along with music he and a couple of other composers came up with. It was more contributory than a direct scoring process.”

He hasn’t had time to seek out any further work in front of the camera: “I basically went straight from Insidious into 11-11-11. Between those and other ongoing music projects, I’ve had my hands pretty full. But I absolutely would be up for creature performing again!”