We're heading to Saratoga Springs, New York for a behind the scenes look at some of the amazing exhibits housed in the X-FILES Preservation Collection. 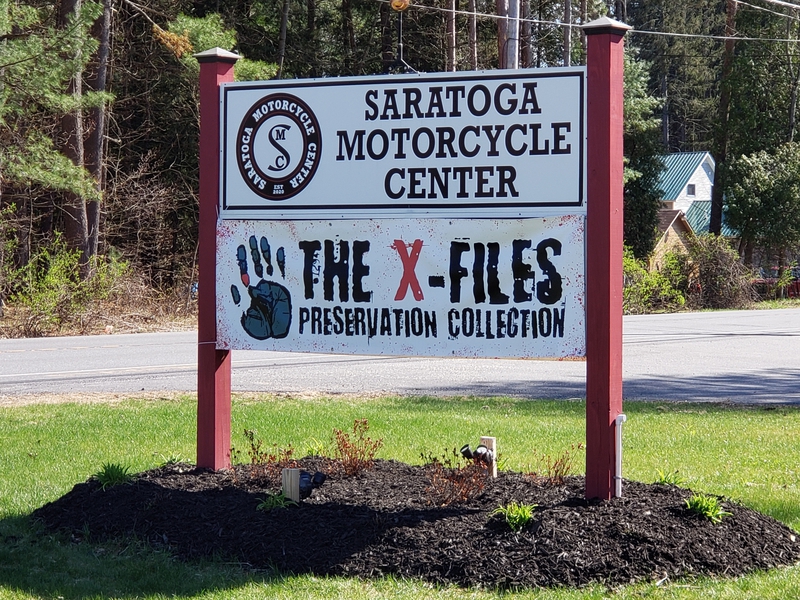 The microwaved doll from "Chinga." Die Bug Die! bug spray from "Coprophagia." The alien cryopod from the first X-Files movie. Guy Mann's Kolchak-inspired wardrobe from "Mulder and Scully Meet the Were-Monster." Scully's personal massager from "Rm9sbG93ZXJz." These are just a fraction of the amazing exhibits on display at The X-Files Preservation Collection, the only full-time museum display for amazing props, costumes, and ephemera related to the cult favorite TV series. 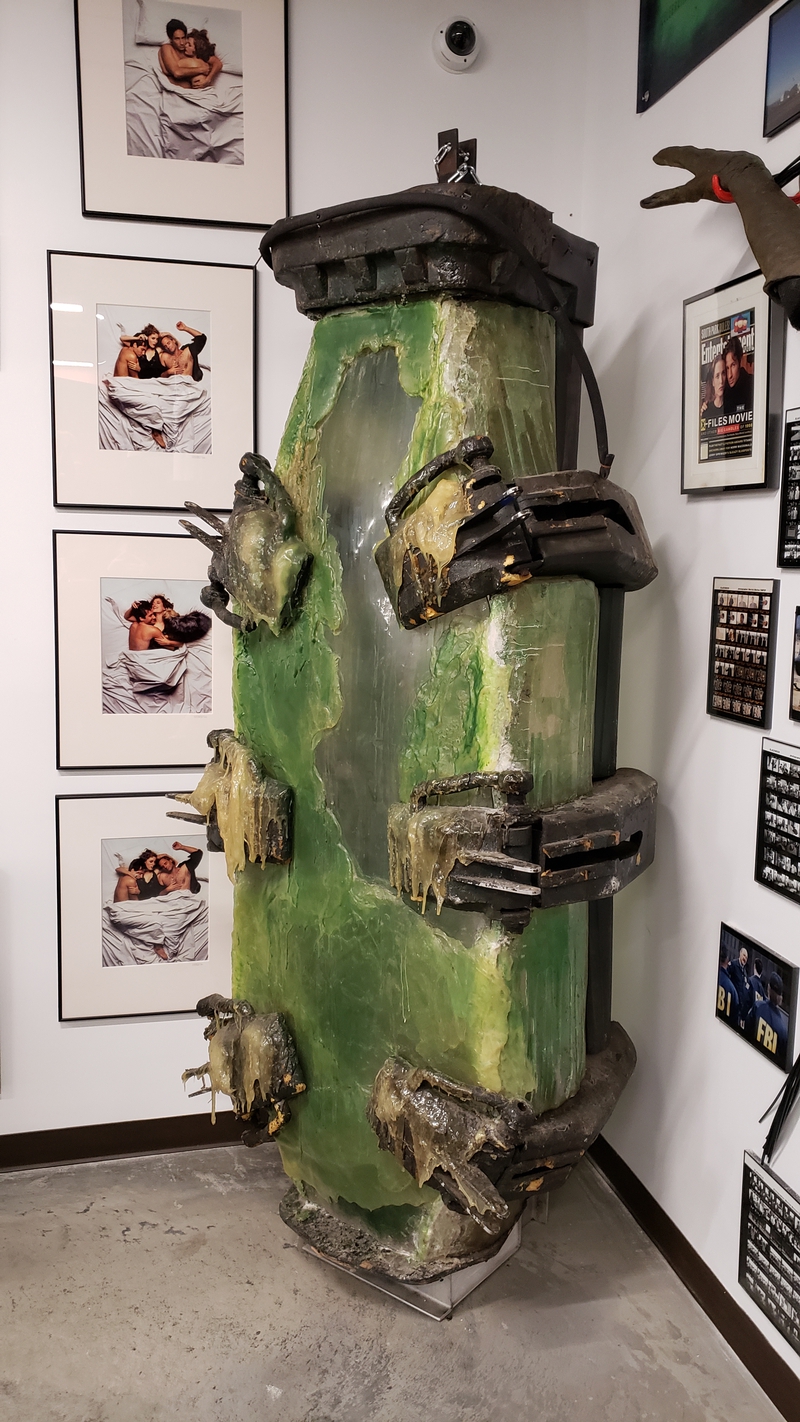 The museum is the brainchild of Jim and Kelly Thornton. Jim encountered The X-Files in 1993, when it first aired. As a heavy drug user back then, he describes the show as being "medicine" for himself. He sees the museum as a way to pay the show back for all the help it gave him.

The small space they have in Saratoga Springs, New York, contains only a fraction of the items they have collected. "This is Stage 1," Jim tells me. Eventually, they want to have a space big enough to hold events, someplace with a screening room, and enough room where they can build "sets" and recreate scenes with some of the wardrobe they have obtained. Jim estimates that they would need about 10,000 square feet to properly display their entire collection. 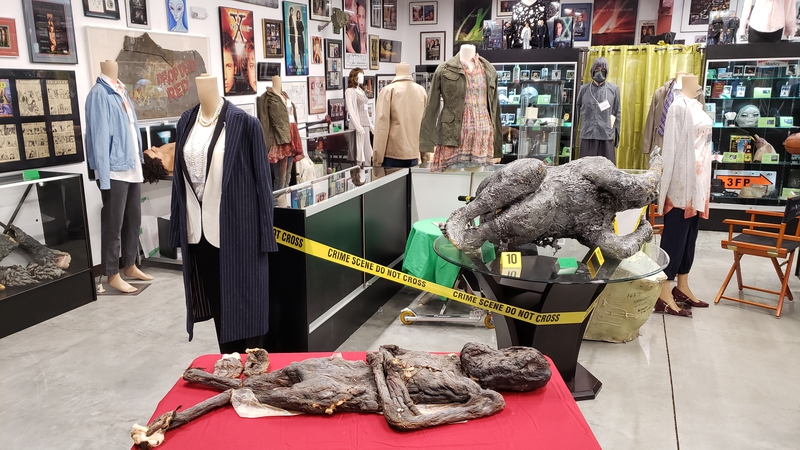 The most impressive part of the collection is that series creator Chris Carter played a huge role in providing the museum with some of their most cerebral exhibits. Chris reached out to Jim after an X-Files convention which series producer Frank Spotnitz attended. Jim and Kelly were there, showing off a small segment of their collection. When Frank reported back to Chris, he contacted Jim, wanting to donate to the cause.

Chris, for his part, doesn't remember how he heard about the Collection. "I didn't believe it would ever actually happen," he told me. "It was just one of those things that felt like a pipe dream. It felt like someone had an idea that I loved, but I felt like it was a pipe dream." When Chris started hearing that the Thorntons were "for real," he decided "it was time to give those things a worthy home." 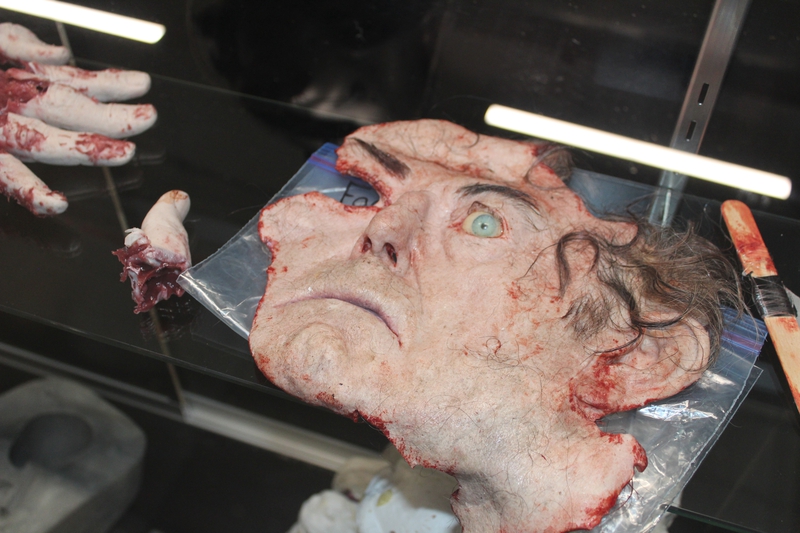 Jim had no idea what Chris was planning to donate, but he was all too excited. He arranged to get a storage pod to collect from Chris' home base of Los Angeles and get the goodies to upstate New York.

"I had no knowledge of what it was going to be," Jim admits, "but it was like Christmas times 1,000." What they received was a storage container overflowing with stuff: everything from framed posters and artwork from the walls of Chris' production office, to script cards used to lay out the episodes, to binders filled with promotional artwork from the Fox marketing department, to a canister of film from the pilot episode, to the original floppy disks that contained scripts. Possibly the most impressive item from Chris' collection is the actual laptop he used to write the pilot script. 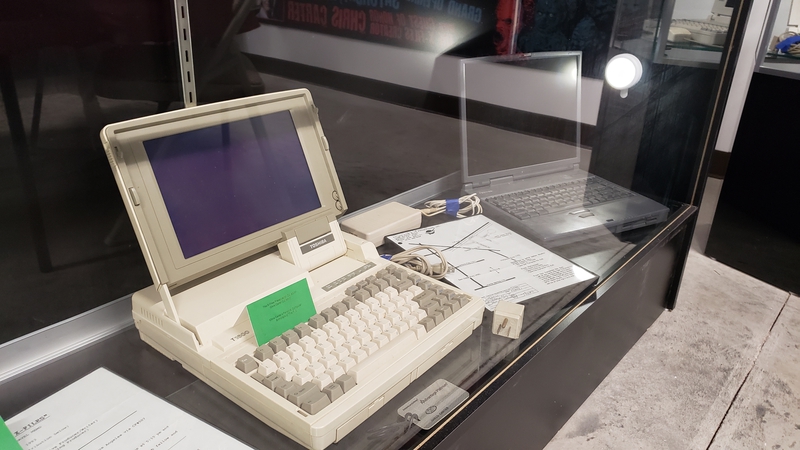 More important than the actual items that Chris donated to the museum was the acknowledgment from Chris Carter himself. "He supports us in what we are doing," Jim says with a bit of awe in his voice. "When Chris first came and saw the space, you could feel the passion," he continues. "He could stay for days, reminiscing."

Chris was impressed by what he saw. "When I first visited, I stepped in, and I couldn't believe how lovingly the whole thing was done," he says. 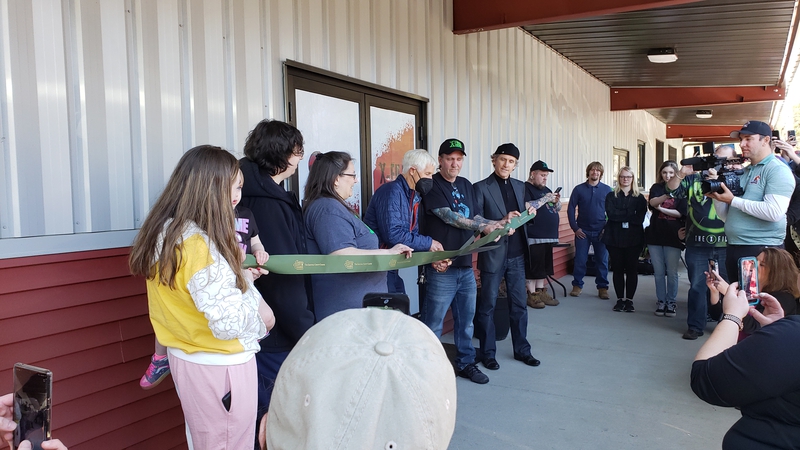 The museum's grand opening was attended by Chris Carter and thousands of fans from around the world - myself included. When Chris cut the ribbon, officially opening the museum, he said, "This is a dream I didn't know I had." When Jim said you could feel the passion, he wasn't kidding.

After a long day of signing autographs for adoring fans, Chris joined the VIP ticket holders at a catered dinner, where they screened the pilot episode. Sitting in that room, you could feel the love from both the fans and Chris. Chris was watching the episode raptly. He told me he has seen the pilot episode at least 100 times, but watching it with the fans was like watching it with new eyes. "You realize the level of fandom here. These people have seen the show… I don't know how many times, and they sat here and watched it again. Just imagine what that means to me, at thirty years. I got tearful, watching the pilot, for reasons that no one else could comprehend. Those relationships… the Scully character, her determination to find the truth… it's powerful stuff."

After the screening, he answered fan questions for almost two hours. He has a remarkable memory for what happened over thirty years ago, and he says he could talk about every scene. This group could easily listen to him do just that. 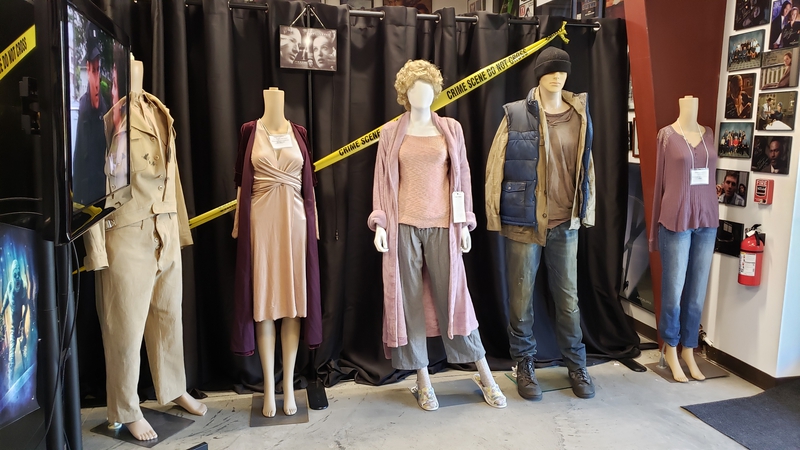 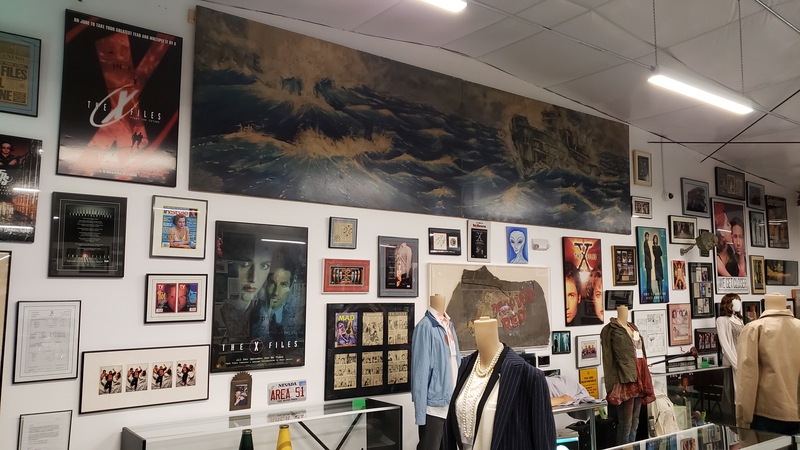 Chris couldn't quite narrow down a favorite display, but among them were the huge painting from "Dod Kalm:" "That was amazing to me that it found a home." He would never have picked out much of the wardrobe as X-Files wardrobe, but when he saw Skinner's suit on a mannequin, he thought, "It looked too small for Skinner!" One of his favorite props is one he gave to the museum, Billy Miles' nasal implant.

When asked what his favorite piece in his massive collection is, Jim's answer is, "the piece I haven't found yet." On his wishlist? Mulder and Scully's screen-worn trench coats from the early seasons; their flashlights; and items from "iconic" episodes like the ice core samples from "Ice" or the bug zapper from "Darkness Falls." 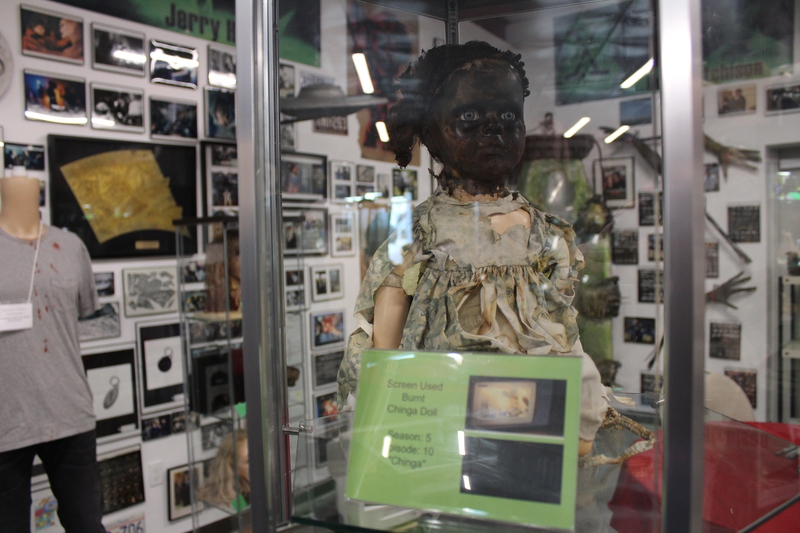 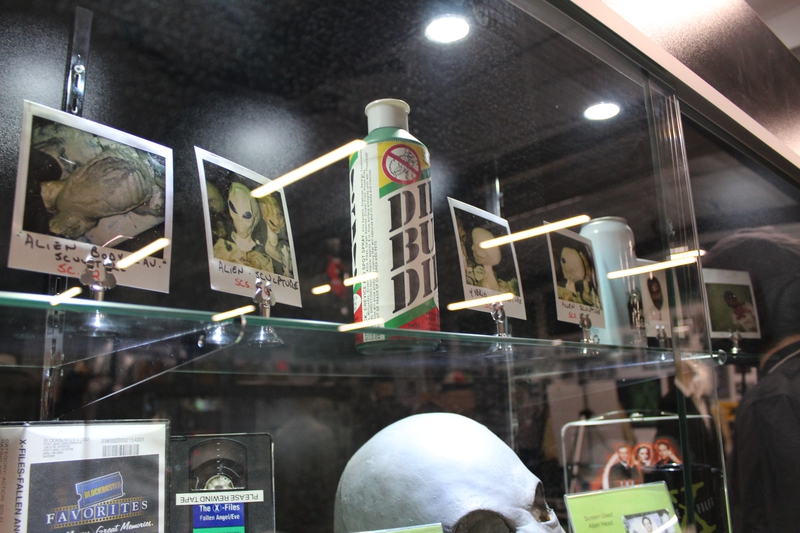 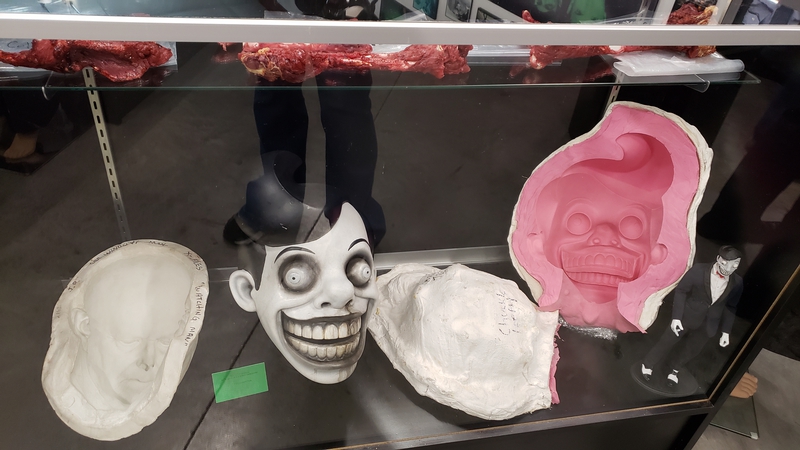 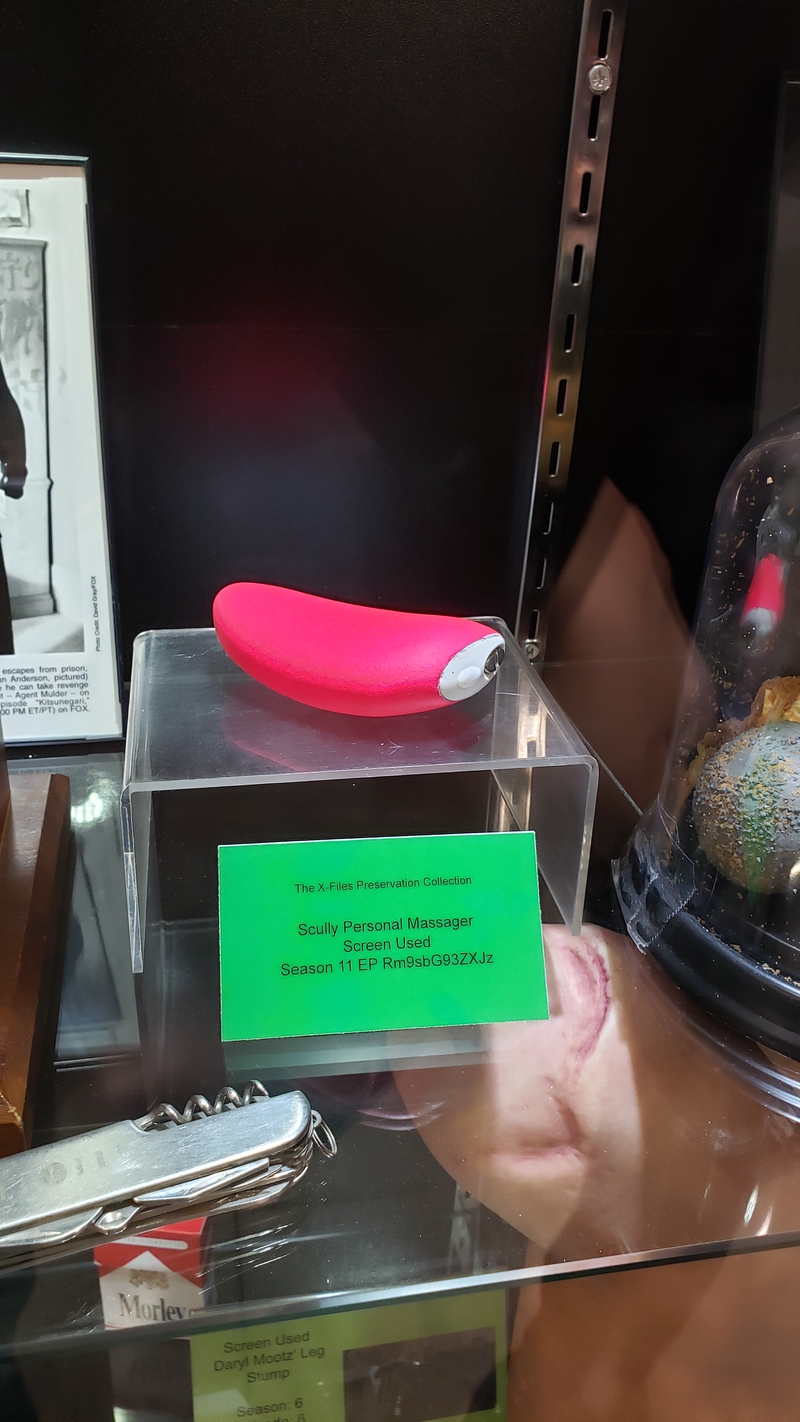 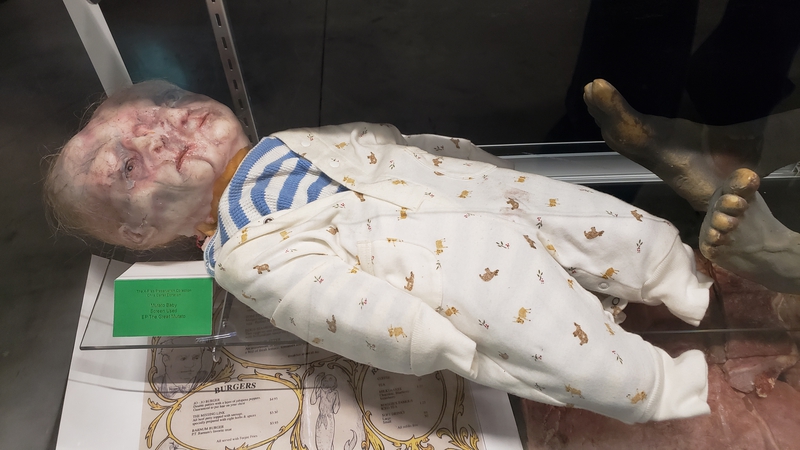