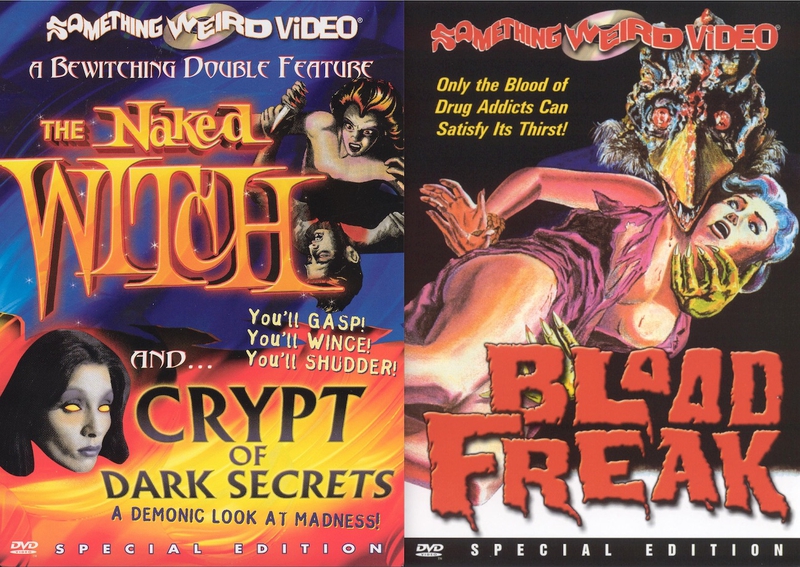 Editor's Note: This was originally published for FANGORIA on November 15, 2002, and we're proud to share it as part of The Gingold Files.

THE NAKED WITCH/CRYPT OF DARK SECRETS

“There’s two reasons people write books,” says a character in Crypt of Dark Secrets. “One of ’em is to tell a story and entertain people, and the other is to record history.” That’s a pretty good summation of Image Entertainment’s recent DVD efforts (many in conjunction with Something Weird Video): They’ve unearthed a trove of B (and sub-B) horror flicks that, while sometimes lacking intrinsic value, are worthwhile as relics from particular periods of regional schlock filmmaking. This double bill is a good case in point: Both movies are a chore to sit through, but just the fact that these obscurities have been unearthed from the vaults of horror history is noteworthy in and of itself.

What’s remarkable is how dull Witch and Crypt are at such brief running times; Crypt clocks in at 71 minutes and Witch is only 59, and 10 minutes of that is made up of introductory titles and narration! On one of the movie’s commentary tracks, director Larry Buchanan raves about being able to see the film, often shown in black and white, in color, but the hues on the transfer (presented fullscreen, like all the other titles here) are generally pale and the image quality soft. Crypt, on the other hand, looks stunningly good, the picture boasting excellent colors and crystal clarity (even when the photography itself is out of focus), derived from a print that’s in pretty good shape.

Beginning a trend in this batch of discs, Buchanan devotes his commentary as much to his overall career as to the movie at hand. His talk (moderated by Nathaniel Thompson) is folksy and friendly and fairly revealing, though some of his best stories involve actresses from his other films. Yet another track contains an audio interview with Witch producer/roadshow impresario Claude Alexander, who’s saltier and more forthright (he calls Witch “a home movie…it turned my stomach”) as he spins stories of the good old days of exploitation. This super-packed disc also contains a passel of voodoo-oriented nudie shorts (this sort of thing gets old real fast for me, but devotees will enjoy them), fun trailers for other low-budget occult flicks and a pretty amazing gallery of vintage horror comic covers, backed by music from the Dead Elvi.

Like Crypt, Blood Freak is an example of Southern-fried fright filmmaking, but any resemblance to any other movie in history ends there. A one-of-a-kind mix of religiosity, anti-drug messages and a killer turkey-man, this is one of those jaw-droppers for which the cliché “You have to see it to believe it” really holds true. Once a legendary obscurity, it has now been preserved for posterity, with the grainy, sometimes scratchy print given a fine, colorful transfer. Fun and informative liner notes by Travis Crawford detail the history of the movie and its makers (co-director/star Steve Hawkes and co-director Brad Grinter) and even lets you know how to get in touch with Hawkes; too bad he couldn’t provide commentary for this one.

His Freak partner, however, is represented here by the short Brad Grinter, Nudist, which despite its (evidently altered) title actually casts Grinter as an anchorman who helps a friend with his wife’s “intimacy problems” by taking the couple to a nudist colony. Another mini-feature, the Hawkes-starring sleaze opus The Walls Have Eyes (“taken from real police files!”), begs two questions: Where do Image and Something Weird dig this stuff up, and where the heck did films like this play in the pre-video days? Other included shorts tie in with Freak’s drug theme, while two more are about turkeys. That idea is more fun than actually watching the featurettes, one of which (A Day of Thanksgiving) was made by Lawrence, Kansas’ Centron company and thus might be the work of a pre-Carnival of Souls Herk Harvey.

Just as low-budget as Blood Freak but not nearly as entertaining, this movie (sporting its original title The Body Shop on the print) was the brainchild of former Herschell Gordon Lewis assistant J.G. Patterson Jr. In addition to directing, producing, writing and creating the FX, he stars under the pseudonym “Don Brandon,” which is also the name of his character, a mad medico (who smokes in his lab!) trying to Frankensteinishly build a perfect woman from freshly severed body parts. The cheap gore is plentiful but the pace is deadly, which much of the movie feeling like it’s playing in real time; by the end, things get so inept that the clapboard has a cameo. But from the bright red background on the main title, the transfer is clean, sharp and bold-hued, with equally rich blacks. The disc includes the new opening and titles from the mid-’80s Doctor Gore VHS release, in which an on-camera Lewis reveals that Patterson died in 1974, just after this movie was completed.

That’s more about the film than you’ll learn from the commentary by distributor Jeffrey Hogue, who devotes his talk to his experiences as a theater owner and head of Majestic International Pictures. Thankfully, while off-topic, his reminiscences are an awful lot of fun, with plenty of stories of offbeat promo stunts (like revving up a chainsaw during a showing of Texas Chainsaw Massacre) that would be unheard of today. He also drops a few priceless observations, like this one on imported foreign B-movies: “Lip-sync’s not that important at a drive-in, ’cause you’re too far away to see if it’s badly dubbed.”

Other extras include the co-feature How to Make a Doll, a silly Lewis-directed comedy presented in a nice-looking transfer; the very early (and very battered) Hammer Films short Quest of the Perfect Woman: The Vampire of Marrakesh, which balances travelogue shots with flashes of then-daring nudity; Maniac Hospital, which starts as a black-and-white sex-teaser, becomes a weird color surrealist horror piece and ends with a baffling b&w coda, with a very good print and transfer; more horror comic covers with Dead Elvi music; and a fun assortment of mad-doctor and Lewis trailers, highlighted by the amazing Fanny Hill Meets Dr. Erotico.

Released as part of the “Blood Collection,” this movie has no connection to the Eddie Romero Blood Island series, though it was thrown together fast by producer Sam Sherman and director Al Adamson when a Romero pic fell through. Sherman claims on his commentary that many fans think Brain is one of Romero’s Filipino movies, but it’s hard to see how anyone could make that mistake, given the number of shots clearly set in a U.S. city and the lack of hyperactive zooms. For such a quickie production that even Sherman admits was “going to the well once too often” (and which he reveals cost one-third what each Blood Island movie did), the film has some fairly impressive gore and a decent car chase; the transfer bears mild grain, solid colors and a crisp image.

Sherman’s talk, once again, is concerned more with his Hemisphere/Independent-International days than with Brain exclusively, and when he does discuss Brain, it’s not scene-specific; I would have liked to hear about the logistics of the car chase, but he spends that section talking about co-star Reed Hadley. Still, it’s engaging enough, even though it ends 15 minutes before the movie does. Just to tie this movie in a little tighter with the Filipino features, the disc includes the same Romero interview from the other Blood DVDs and an on-camera chat with Brides of Blood star Beverly Hills that doesn’t appear on the Brides disc, plus trailers and stills from the entire series and very enthusiastic liner notes by Jim Arena.

While it’s not in the same league overall, Rattlers shares one distinguishing quality with Kingdom of the Spiders: the use of real creepy-crawlers in its attack scenes—even though, in at least one setpiece, the snakes are visibly trying to squirm away from the person they’re supposed to be attacking! This was also an early film to tie a government conspiracy in with its nature-amok premise, and it contains one very odd narrative digression in which the hero and heroine, camping in the desert on rattler patrol, suddenly go on a romantic jaunt to Vegas! The image isn’t up to the level of Image’s past Harry Novak titles, bearing variable levels of color, grain and sharpness, but it’s never less than watchable.

The main feature is supported by a pretty worn-looking print of the Boris Karloff junker The Snake People, plus a clutch of serpent-oriented shorts, ranging from burlesque numbers to mondo segments, and still more of that great comics art. My personal favorite is the creature-feature trailer collection, which will warm the hearts of those who (like me) favor this particular subgenre.