Review: I SPIT ON YOUR GRAVE 2 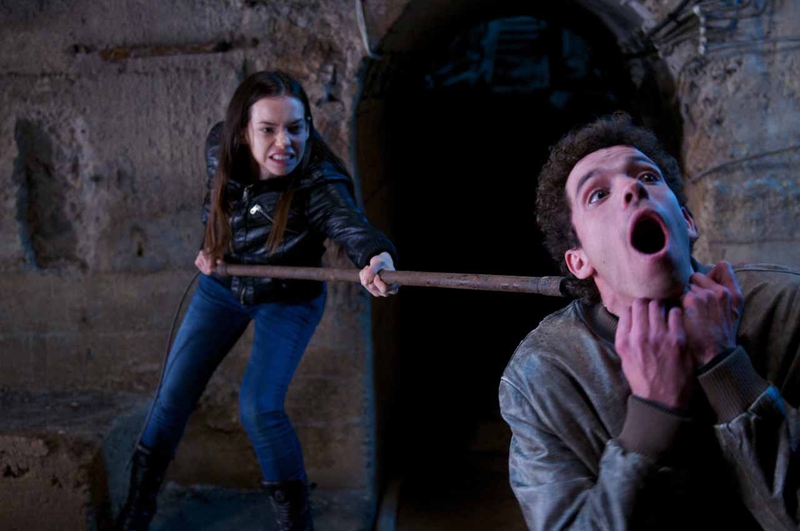 Editor's Note: This was originally published for FANGORIA on September 23, 2013, and we're proud to share it as part of The Gingold Files.

How do you make a sequel to a film that came to a pretty concrete ending? In the case of the new follow-up to the 2010 redux of Meir Zarchi’s notorious rape-revenge pic, the first answer is, you create what is essentially another remake. The second answer is as depressing as it is inevitable.

I Spit on Your Grave 2 is a different (which is not to say new) story that opens in New York City, where lovely young Katie (Jemma Dallender) is desperate to break into the modeling business. So desperate that she responds to a wall-posted offer of a free portfolio shoot and, ignoring a couple of obvious warning signs, heads off to the appointment in what turns out to be a rundown basement. (But not before a thuddingly obvious bit of foreshadowing in which Katie proves her handiness at improvising rat traps.) Ivan (Joe Absolom), who’s running the session, at first seems to be a stand-up guy, but soon he’s asking Katie to do nudity, and she understandably balks. Unfortunately, she leaves her address on a release form and is soon paid an unwelcome visit by Ivan’s brother Georgy (Yavor Baharoff), who ties her up and rapes her in the first of many protracted, graphic scenes of abuse.

Katie’s ordeal, it turns out, is just beginning. Ivan arrives at the scene with his other brother Nick (Aleksandar Aleksiev), and the trio drug her and stuff her in a box. She wakes up chained to a pole in an even filthier cellar, where she’s violated some more. There’s a glimmer of hope when she manages to escape—even though she discovers, in the film’s one surprising if unlikely development, that she’s been shipped all the way to Bulgaria. There are all kinds of story possibilities set up by stranding poor Katie in a land where she doesn’t know the language, but instead, in another contrived and this time thoroughly predictable plot twist, a person she thinks is her savior proves to be in cahoots with the brothers, and she’s returned to the basement for even more pain and humiliation.

I Spit on Your Grave 2 is an example of what could be called “let the crime fit the punishment” filmmaking, in which the filmmakers take the heroine’s eventual vengeance as license to subject her to the most cruel and vicious treatment for a long, long stretch of screen time. With no other digressions from the original scenario besides the change of locale, they “up the ante” my making Katie’s plight somehow even worse than that suffered by Jennifer in the previous I Spit. By the midway point of this film (which, like its predecessor, is pointlessly protracted to close to two hours), even those who appreciate the cathartic charge of a revenge scenario will likely find themselves recoiling from the endless wallowing in Katie’s degradation, long before she finally escapes, nurses herself back to health and subjects the Bulgaria boys to deserved payback. Yet her revenge isn’t as elaborate or torturous as Jennifer’s, and even the sight of one man’s genitals squashed in a vise doesn’t redeem having to witness the endless grotesqueries visited upon Katie.

While the 2010 film at least made an attempt to plumb the chauvinist psyches of its assailants, I Spit 2 indulges in crude, one-dimensional stereotypes of evil Eastern Europeans anxious to mistreat unfortunate Westerners. Returning director Steven R. Monroe and new scripters Thomas Fenton (part of the Saw IV writing team) and Neil Elman (a veteran of numerous Syfy flicks) resort to other clichés too; there’s a bit where one of the villains listens serenely to opera while Katie is tortured in the background, and no movie like this is apparently complete without a strobe-lit Eurotrash disco setpiece. Dallender suffers gamely and enacts her vengeance as persuasively as possible, given that Katie’s switchover to terminatrix mode is more a function of formula-bound inevitability than psychological plausibility.

Anchor Bay’s Blu-ray and DVD releases of I Spit 2 (which weren’t available for advance review) apparently only feature deleted scenes as extras; under the circumstances, it isn’t surprising that nobody involved felt compelled to sit down and speak for this one. Best to delete the entire film and move on.