In the end, the algorithm is coming for you all. 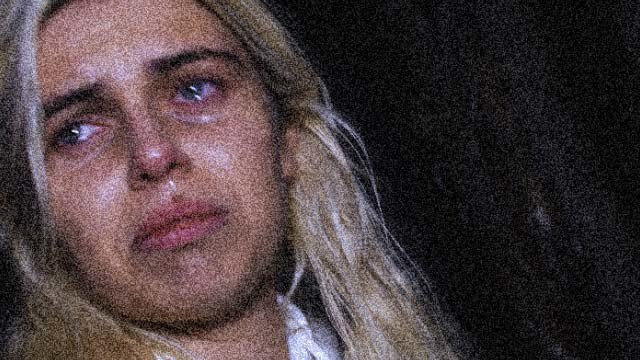 “It’s about how you express yourself, not who you are, that really matters.”

— Sophie, I Am Sophie

And ay, there’s the rub, to quote the complicated Hamlet. We now live in an eerie world where authenticity is a calling card, yet so many people live utterly manufactured lives with meticulously edited personas. It all seems so perfect; in fact, it’s sometimes nearly impossible to decipher the difference between real and fake on social media, from that macro-influencer’s private jet flight to a Real Housewife doing a vlog about her new Hermes Birkin bag.

As for the little guy, the small-time content creator looking for a seat at the table? They're forced to take what they can get when it comes to views, followers, subscribers, likes. On the off-chance they go viral with a video, there is a choice to be made: do they attempt to capture that success, or just let it slip? Chasing the dream demands compromise and the willingness to be molded into the very thing that made them go viral in the first place, usually to the detriment of making the content they truly love. It leads to a ripe inauthenticity that strips the medium of all its initial value as a tool for human connection. It’s a scary trip down the rabbit hole — and that’s where horror ARG I Am Sophie comes in, hard.

When the YouTube series began in February 2020, aficionados and trolls saw the first video (a channel introduction giving Sophie, the obnoxious daughter of a millionaire, an unnecessary spotlight for her lavish lifestyle) as a highlight reel featuring just another face of untenable wealth. The whole thing became an opportunity to rag on someone who, in good conscience, couldn’t fight back because their life was too dope. Someone they thought was real, mind you. However, what they really ended up tuning into was a mysterious and monstrous allegory about what it’s like to go pro and have success on the platform. Spoiler alert: it certainly isn’t the grand old time it seems to be.

The idea of lulling viewers with a false sense of security — the proverbial shit, which begins with ominous mid-vlog glitches, doesn’t start hitting the proverbial fan until a few videos into the storyline — was definitely part of creators Tom Ransom and Dan Bolland’s scare tactics.

“It’s like candy for the brain,” Bolland says of the kind of videos Sophie’s character and her real-life counterparts like vlogger Bobby Meisner make. “People watch it, not because they want to be edified or thrilled. It’s like a special state where your brain disengages and it’s really relaxing because you just go on standby mode. And that’s what I love about Sophie because that’s when the horror gets you.”

And get you it absolutely does. The series goes from zero to 60 in practically no time at all, and it makes a point to employ fool-proof horror tropes to heighten the difficult realities of creator life. Sophie, played expertly by Emily Flo Carter, is intent on showing the internet “what it’s like” to be her — and the series uses this set-up as a launchpad to play out the (quite literal) decay of creator individuality and identity within the YouTube machine.

The story’s structure — how the ARG first shows you an example of the spoils, however incredible and terrifying, once life has been dominated by the platform and then ushers you through the exact horror of how one becomes that person — helps call into question how people have to conform to touch success, and it is further aided by its dialogue. Sophie shows off her lavish life in a series of vlogs, but things quickly get weird when she uploads one of her videos to find spliced glitching images of a random, creepy woman in them.

After a series of increasingly weird events (and more glitches) at the home of the creepy woman, who turns out to be a crazy fangirl, the series’ first truly jaw-dropping video brings us into true horror territory. In 11271518920813.mp4, Sophie comes face to face with a home invader, who is actually a friend: a character named Mark, whom viewers last saw as a studious and smart IT guy in the previous upload. This time, he’s in Sophie’s bathroom and in his underwear, covered in blood. Sophie, and the audience, are both shocked to see him — and his monologue, accompanied by sick flashes of maggots and bubbling pus, hits sharply at the quest for better, stronger metrics, and as much virality as one can muster. “I don’t know, I don’t know what I’m doing here. But I’m here now and that's what matters, isn’t it, Sophie?” Mark shakily tells her, before referencing his brain. “It’s like there’s a worm in here, it’s laying eggs in here. It gets fat. And it gorges on your thoughts, distends its stomach and that’s its feed – its pulp. Until you’re just a worm, just laying eggs.”

The video dissolves into a cat and mouse game during which Sophie and her cameraman, Ben, run horrified through her mansion to get away from Mark and a suited man with a disfigured face who accompanies him. Not to spoil what is so special about that suited man, but it is clear that he is the mastermind behind the mounting dread. In an instant, Sophie and Ben puzzlingly warp into a decrepit, decaying room, where they meet their demise — and, interestingly enough, our crazy fangirl seemingly “takes” Sophie’s place as she dies. 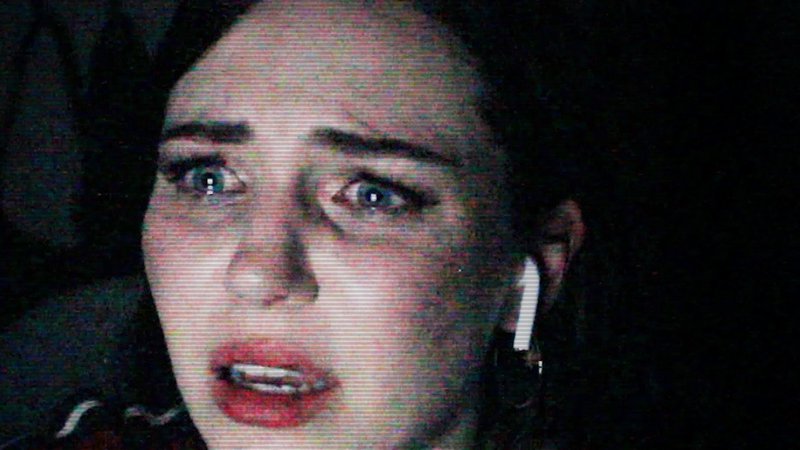 Concerned with the plight of trying to make authentic work in an oversaturated environment full of judgment, English filmmaker Tom Ransom came at this topic from as personal an angle as you could get. He is the founder and voice of MMA On Point, a wildly popular channel focused on the sport that has nearly 900,000 subscribers to date. He didn’t have “the cheat codes to be popular” on the site — you know, money, which brings the ability to at least pretend like you have an exciting life — but he stuck it out and built a brand through blood, sweat, and tears.

In his research for the series, Ransom also tapped into the quieter side of YouTube and spent time watching the vlogs no one else does, the ones made by passionate people who love posting and sharing their lives, experiences, and opinions. It’s a side of the platform he sees as beautiful and tragic — and it’s where the series’ second lead, Lara (portrayed by Bibi Lucille), was born. The second half of the series follows her story, showing how she goes from a starry-eyed hopeful, desperate for connection, to an obsessive, hungry husk on the hamster wheel of success, just like her favorite person, Sophie. She is all of the people striving for likes and views that never get them — so it makes sense that when a viewer sends Lara a play-through request of what is actually a deceitful (and seemingly sentient) computer game, she is weirdly comforted by the attention (however negative) she begins receiving. The game increasingly requests and takes more and more from her, until she is utterly unrecognizable: the girl we meet as the crazy fan. It’s exactly what happens to creators who make the site their end-all-be-all, but to see it spelled out with brazen manipulation and unhinged desperation is altogether jarring and effective.

Further complicating the realities of creator life, the scariest set-pieces of this series — everything from being chased into a Saw-style room through a portal to intense animal mutilation, insidious coercion, and malevolent supernatural entities — have even scarier origins. Ransom pulled macabre moments directly from his dreams (variations of which he has “every night”) and turned them into the hellish nightmare that makes up Sophie’s most horrific scenes. Stress and anxiety are known to cause vivid dreams and nightmares, so it isn’t shocking that the streamer was seeing the intense pressure of his waking life manifest in sick ways while asleep.

“The horror of this series is absolutely embedded in the experiences I’ve had,” Ransom tells FANGORIA, and there’s something about the way he says it that really shows he has lived this life. It hasn’t been a horror movie for him, not in the way we know and love and certainly not the way he has crafted. But it shined a light on horror in a new way. “The sudden shift of everyone looking at you and judging you [when you get popular] is what haunts me.”

The way hate breeds on the site is sure to cause some messed-up dreams. “It’s like going to work at your normal desk job, a 9-to-5, and at the end of your 9-to-5, you have 100,000 people telling you that this sucks and they hate you for your 9-to-5,” he explains. “It’s a bizarre feeling and these things stick with you, ultimately, in the way you dress yourself and the way you speak. It’s the platform in and of itself because they are ripping away something you love and making it disgusting and perverted.”

Make no mistake: the creators knew what they wanted to say, and they also weren’t afraid to acknowledge where their stories lined up a little too nicely with reality. Ransom’s self-awareness reared its head amid an introspective tangent during our chat, where he claims he’s “no different” than the monster he created because if he hadn’t spent big bucks on the production early in the series “no one would’ve given a shit.” As if the ouroboros couldn’t choke harder on its own torso, the “sad joke of Sophie,” Ransom says, is that he was able to finance high-budget elements — like the private jet, the Lamborghini, Sophie’s mansion and the necessaries to create lavish and realistic horror set-pieces — directly through his YouTube profits from MMA On Point.

“That’s just where this platform is. To be where you want to be, you have to spend money. And you have to be extravagant in it, otherwise nobody gives a shit,” Ransom adds. “We were the right people at the right time.” There’s nothing like proving your own point.

To the same effect, he notes that Sophie “running away and warping into her worst nightmare” is akin to “slowly trapping myself in my own creation” — which could be said for MMA On Point or Sophie itself, which has garnered a massive viewership over the course of its run. While the hate Ransom received online started with his fighting channel, he saw a similar wave of animosity while actively dropping Sophie videos throughout 2020.

“Because you can run and run and then ultimately no matter how far you’ve run, you’ve dug your own grave,” he shakes his head. “It’s easy to hate. That’s the message of it. The internet at the moment is just a vapid void of negativity and sheer hate.”

And there’s just something so scary about that.

Click here to dive into the twenty-episode world of Sophie for yourself.