Review: HOUSE AT THE END OF THE STREET 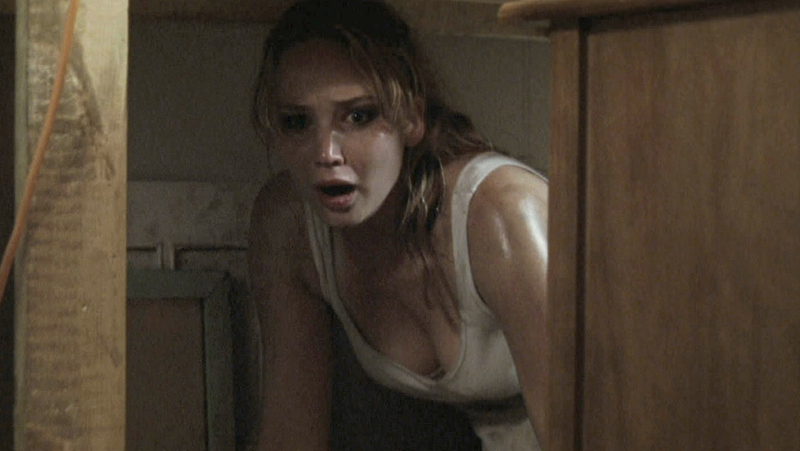 Editor's Note: This was originally published for FANGORIA on September 21, 2012, and we're proud to share it as part of The Gingold Files.

House at the End of the Street is one of those movies that seems to have been written backwards—it plays like its creators came up with their Big Plot Twist first, then struggled to fill the hour beforehand.

Those creators include screenwriter David Loucka of Dream House, who seems to have a thing for stories that have Big Reveals at the hour mark and are set in or around homes with murderous histories. In this case, the troubled abode is a short walk through the woods away from the suburban Pennsylvania house into which teenaged Elissa Cassidy (Jennifer Lawrence) moves with her recently divorced mom Sarah (an unflatteringly photographed Elisabeth Shue). They’ve gotten a great deal on the place, evidently due to its proximity to the site where—as we see in a prologue—a young girl bludgeoned her parents to death. That house is now an object of notoriety for the neighbors—not because they feel it might be haunted, but because it’s driving property values down.

And in fact, there’s a living person still dwelling there: Ryan (Max Thieriot), son of the victims and brother of the little murderess, who is apparently dead but whose body was never found (wink wink). Thanks to his family history, nobody wants to hang out with Ryan much, and he’s a target of bullies at Elissa’s new school, but she takes a shine to him, since he seems to be a sensitive, polite, thoughtful guy and also, as Sarah helpfully explains, because Elissa has a history of turning troubled guys into “projects” she tries to save. There’s a lot of this kind of explaining in Loucka’s script, which, when it comes to character development, is much more prone to telling than showing. For a good portion of its length, House marks time with facile drama between mother and daughter and wan getting-to-know-you scenes between Elissa and Ryan, throwing in a subplot about Elissa joining her classmates’ band for no other apparent reason than to show off Lawrence’s singing voice.

Where does the horror come in? Well, Ryan’s got a secret that we learn at about the half-hour mark, which develops a bit of tension amidst such pedestrian score tactics as music swelling to false alarms and figures suddenly crossing the frame to the accompaniment of loud bursts of noise. House’s director is Mark Tonderai, a Brit who made a well-regarded road thriller called Hush a few years back, but whose work here is disappointingly anonymous, aside from the welter of overexposures, jump frames and fast-motion gimmickry he counterproductively hurls at us during that murderous opening scene.

The big news about House at the End of the Street is the presence of Lawrence, who actually filmed it before The Hunger Games but after her Oscar-nominated role in Winter’s Bone. This is really the sort of part an up-and-coming young actress should take on before such an acclaimed, high-profile part, not after; Lawrence gives a lot more to Elissa than Elissa offers her. As a horror heroine, she demonstrates a certain amount of independence and resilience, but also the usual weaknesses for stepping out onto her porch at night to check out that strange noise and exploring an unfamiliar basement where she can easily be trapped. Amidst the seriousness of the performances in general, a bright spot is Allie MacDonald as Elissa’s new school friend Jillian, who has an amusing new expression to express disapproval in her every scene. Too bad the movie forgets about her after a confrontation that provides the second-act turning point.

From there, Elissa goes into investigative mode and uncovers the Big Secret, leading to a protracted climax with lots of running from one room to another, an untrustworthy flashlight, a slow creep in to a felled villain who couldn’t possibly still be alive, etc. The revelation holds perverse possibilities that Tonderai and Loucka seem loath to explore, and the director is similarly timid about the violence; there’s a sense throughout of punches being pulled so as not to jeopardize the PG-13 rating (which was awarded in part due to “some teen partying” that is about as tame, if overdirected in the manner of that prologue, as it gets). House at the End of the Street is watchable and professionally made, but too uninspired to raise hackles, and derivative to boot. The borrowings from Psycho are frequent, right down to the last shot—though in this case, it’s the movie that wouldn’t harm a fly.