The Plagues And Pleasures Of Horror Comedy

Breaking down horror's most misunderstood sub-genre. 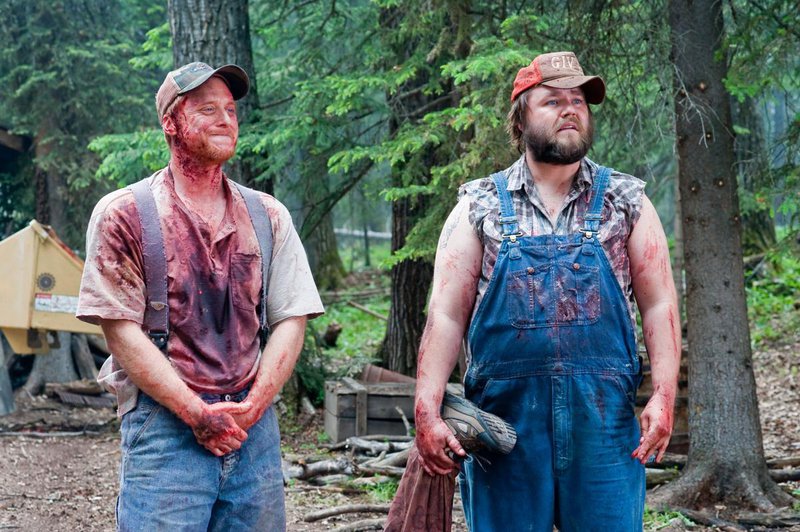 Alan Tudyk and Taylor Labine in TUCKER AND DALE VS EVIL.

Much like its parent genres, the “horror comedy” has endured huge swaths of time as a beleaguered label despite constantly proving that there are throbbing veins of gold in those haunted hills. Unlike prototypical horror films, however, ones purely concerned with foolery and ghoulery are much easier to dismiss. Horror has functioned as an effective cloak for commentary on everything from bigotry to the dissolution of the family unit to environmentalism and beyond since its inception, but you try to tell someone about Return of the Killer Tomatoes’ hilarious in-film commercial to fund the rest of the movie as a comment on capitalism, and they’ll laugh you out of the pizzeria.

You know what? They’re not wrong! At the end of the day, if a horror comedy made you laugh and conjured up some spooky horror-adjacent vibes for you, it did a good job. Often, that’s about as much as the filmmakers set out to do.

Here’s where I rush back in to make a case, though. Even when they’re hits, horror comedies are still derided, or, at best, patted on the head then sent on their way. When The New York Times reviewed the immaculate The Return of the Living Dead in 1985, critic Stephen Holden noted “[it’s] by no means the ultimate horror movie it aspires to be. The volume of stagy gore quickly reaches a point of diminishing returns. And rather than trying to sustain a mood of grim suspense, the writer-director Dan O'Bannon has conceived this cinematic cousin of ‘Night of the Living Dead’ as a mordant punk comedy.” Instead of noting how well these (very intentional) tones worked together, it’s dismissed as failing at something it never tried to be: a cut and dry horror flick. As great a phrase as “mordant punk comedy” is, it’s not used here as a compliment, and that’s ridiculous.

Part of the issue is that, as both genres and human conditions, horror and comedy give off the misconception that they’re easy to interpret and render without much effort. Ever gasp at a jump scare? Bam, horror! Ever laugh at a dumb joke or a guy falling on his ass? Pad that out to 90 minutes and you got yourself a motion picture! It’s easier to mime than to mine when it comes to digging into why things make people react the way they do, and that always bears out when it comes time to portray those reactions onscreen.

Comedies and horror films are often burdened by their authenticity being buried by a veneer of inauthenticity. Truly funny people and those who deeply respect and understand horror (and, god forbid, those who live with both in their hearts) are quick to use jokes and allegories to talk about real, painful topics. Hell, even when they’re not, getting a genuine laugh out of someone is one of those warm little rare gifts of humanity we have far too few of. Making thousands of people laugh over years and years is a monumental achievement, something that becomes its own heirloom, as we’ve now seen generations hand Abbott and Costello Meet Frankenstein down their family tree. The craft in making these incongruous genres work together should be enjoyed like it was candy, but it’d be nice if it was recognized as the artisanal imported stuff rather than handfuls of reformed corn syrup.

Unfortunately, much like canisters of Trioxin-ridden bodies, we sure do have more than enough barrels of the cheap, crummy, contemptuous stuff. Every rose has its thorn, and for every What We Do in the Shadows, there’s a Vampires Suck. Both these films would be in the same section at a video store, but there couldn’t be a bigger gulf of difference between the pitch-perfect mockumentary dry humor of the former and the rank, hateful, reference glut of the Jason Friedberg and Aaron Seltzer venture. Most audiences aren’t exactly eager to dig deeper into a subgenre once burned, however, and that’s always been an uphill battle for this intrepid but uneven species of movie. Someone put off by the excessively horny Stan Helsing may decide to skip the silly brilliance of Tucker & Dale vs Evil. Sure, they’re only cheating themselves, but it’s hard to blame them.

The enormous success of 2000’s Scream-skewering Scary Movie (it made over 10 times its $19 million dollar budget theatrically worldwide) proved that the right material at the right time can have a real pop cultural impact. Unfortunately, it also begat a flock of increasingly uninspired sequels and helped encourage a village of straight-to-DVD/VOD pretenders that positively radiated derision for its viewers.

The original Scary Movie also served as a fork in the road for the subgenre. The franchise always made its money back and then some, but as CGI became cheaper and more accessible and the box office returns served up ever-shrinking portions, it became clear that pouring tens of millions of dollars into these spoofs wasn’t exactly necessary any longer.

Looking at the opening of 2006’s Scary Movie 4, its Saw take-off is constructed exclusively of first draft jokes, but there is something undeniably compelling about the baffling trash pop culture thrill of seeing Dr. Phil and Shaquille O'Neal yell at each other in that iconic, limb-surrendering room. The bummer is that it doesn’t deliver beyond the first few seconds of recognition. With mid-to-low-tier spoofs, not only is the opportunity there to get really subversive, but it’s also pretty much a necessity for it to work as a comedy film. The marquee names and references do all the work of getting the butts into seats; now you can get weird on the audience. When it’s instead pulled back into being just a faint allusion to what’s supposedly being wickedly lampooned (usually just the beats shared in trailers so everyone will “get it”), it’s letting the audience know that the filmmakers/studio committee think we’re a bunch of jerk simpletons who wouldn’t be able to handle a new Airplane.

Friedberg and Seltzer and their like aren’t ripe for reexamination, and they never will be. Their parodies had their “Best By” date scratched off before they hit theaters. As time passes and their clunky pop culture references age completely out of public consciousness, there’s an ever-thickening miasma of inscrutability covering the lazy gags that were once merely cynical, soulless, clunky and unforgivably unfunny. They all play out like hostile space aliens putting on a hateful community theater production of every reason why our planet deserves to be destroyed right before they do it. We plead that their grotesque production contains no true sense of how humans have ever actually processed humor or displayed basic common decency, please, let us show you Little Shop of Horrors! Then the aliens look down at us and whisper “no” before putting on blindfolds from Bird Box and blowing us up with farts or something.

It’s not unfair to compare expectations between horror spoofs and wholly original horror comedies, at least not in a world that contains Mel Brooks’ astonishing Young Frankenstein.

Young Frankenstein managed to attach itself to the same wavelength that helped make Abbott and Costello Meet Frankenstein so successful. A & C didn’t need hindsight to know that, while the actual tropes Universal monster movies trod so well were pretty easy to make fun of, it was much funnier and more entertaining to make fun with them. Taking the time to mimic James Whale’s love of fully fleshed out side characters and Tod Browning's atmosphere-ripening establishing shots sold the jokes like hotcakes and managed to sneak in its own effective gothic short film between the wisecracks and sight gags.

Bad horror comedies know they’re bad about 99% of the time, and they seem to radiate that resentment onto the audience. (I imagine them spitting out between cigar chomps, “Make ‘em suffer in the cheap seats as much as we suffered in the editing room!”) Great horror comedies know they’re throwing a killer party, and they’re gracious hosts. Their attention to detail is why they remain fun, it’s why they endure, and that’s why I can still put on Shaun of the Dead any day of the week.

Of course, horror comedies are not all created equal, but to be fair, that’s often because they don’t exactly all have common goals. 1983’s Hysterical or 1982’s Pandemonium aren’t silly cheese fests only because they pale in comparison to the big-budget grandeur of the glamorously absurd Dean Cundey-lensed Death Becomes Her from 1992; they’re just coming from different sides of the street. Much as it’d be silly to compare a hamburger stand to a Michelin star-winning sushi restaurant, so too should we avoid comparing the “House of Bad Pies” to Tree’s fantastic “Groundhog Day from hell” montage from Happy Death Day. Just because something’s goofy doesn’t automatically mean it’s not sincere, and it’s a big enough party to welcome everyone who’s showing up in earnest.

All that said, the subgenre has rehabbed its reputation admirably over the past handful of years. Tragedy Girls, The Final Girls, Extra Ordinary, The Happy Death Day films, Scare Me, Freaky… every year we’re getting spoiled with authentically well-made and entertaining horror comedies, and even “straight” horror films with a wicked sense of dark humor are all the rage. A big reason for such an effective balance is the inclusion of women as real main characters instead of using them merely as sexy or humiliated props. Young Frankenstein not only had the gift of a cast including Cloris Leachman, Madeline Kahn and Teri Garr, but Mel Brooks also trusted their instincts, and their improv created some of the funniest moments of the film. Imagine that train scene without Kahn’s Elizabeth ducking Dr. Frederick Frankenstein’s blown kiss!

This truth was gloriously cemented back in 1988’s Elvira: Mistress of the Dark. Tragically slept on during its theatrical release (the distribution studio closing immediately before its release damned it before it even got a chance), it’s rightfully found an appreciative audience over the years thanks to home video and streaming. Cassandra Peterson mixed her horror host’s iconic sex appeal, Valley Girl delivery and Groundlings-honed comedic timing to surprisingly wholesome results. From magic talismans to food demon puppets to a punk rock dog makeover, it’s the best of America’s 1980s’ pop culture kept pristine in an airtight, neon-lit time capsule that remains as fresh as Elvira herself.

So, it took us longer than it should have to realize that, much like everything else, giving money to a diverse group of passionate, talented people will produce something a lot more meaningful and joyful than a misanthropic jumble of trendy, mean-spirited quotations. Imagine! All we can do now is appreciate them while they’re fresh releases and still celebrate the classics to make sure we don’t backslide into the Paranormal Activity parody universe. Just as the sins of the father shouldn’t be visited upon the son, neither should we let the blot of lazy garbage taint the gems we’ve been given over the years. Horror comedy’s had an uphill battle, one that’s as varied as it is weird. If you still can’t find any love in your heart for gory goof-em-ups, then please, at the very least, don’t make one yourself.