Horror and heavy metal spill over the tabletop in HELL NIGHT, a new doom biker RPG setting and ruleset from Gavriel Quiroga. 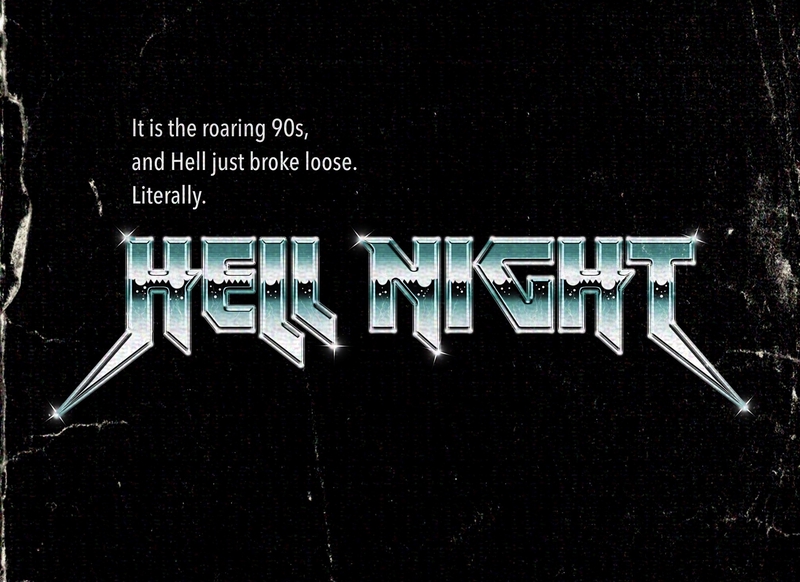 The King of Hell, it seems, has been M.I.A. for decades and a handful of Archons, powerful demons whose job it would normally be to keep things miserable in the netherworld’s many circles, have taken the opportunity to go AWOL themselves and wreak havoc on Earth. The Heavenly host is displeased with this breach of order and has issued an ultimatum: get these infernal upstarts back where they belong by dawn, or we’ll storm your gates and end everything once and for all.

In Hell Night, the new doom biker role-playing game by Gavriel Quiroga, players adopt the role of infernal footsoldiers sent to wrangle the Archons back to Hell and avoid the angelic fury. It’s bad guys versus worse guys with the “good guys” cast as the Big Bad.

Quiroga cites the Black Skulls, the demonic biker gang from Panos Cosmatos’ 2018 film Mandy as an inspiration for the game. But shouldn’t we be playing the good guys? Well, Hell Night offers players a freedom from the usual role-playing game tropes. “We get to play sinister dudes or bad guys without the moral aspect of playing the heroes. It is much less constrained,” says Quiroga. This sets the stage for what promises to be an evening of berserk, over-the-top action, and chaos on the tabletop. 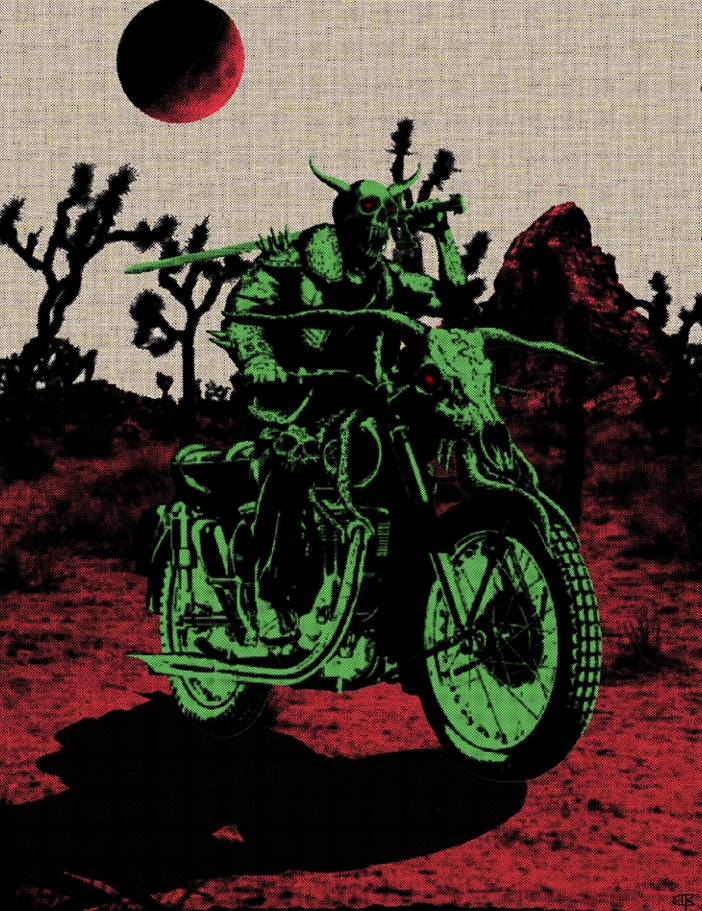 While Hell Night contains rules for play, it’s really “rules agnostic,” allowing players to adapt the setting to whatever RPG with which they want to use it. However, the ruleset Quiroga provides is perfect for the lean and mean experience he envisioned.

Character creation is dead simple. Like his previous RPGs, the dark acid science-fantasy Warpland and the retro-tech noir Neurocity, Hell Night is powered by two six-sided dice (2d6), rolled to generate the character’s stats: Guts (how much ass you kick), Style (how awesome you look doing it), Brains (thinking on your feet), and Grit (a spendable stat used to attempt actions or, more awesomely, perform a stunt.)

Character classes include Slayers (demonic barbarians), Reapers (former warlocks turned soul hunters), Fallen (outcast angels), and others. Usurpers sound especially interesting to play as they inhabit mortal “vessels” to get the job done. Should your current mortal vessel expire, you would spend Grit and roll a die to find another suitable mortal to inhabit. Let’s hope the new model is a little hardier than the last.

Twenty-five available Edges add a bit of panache, granting players their own theme song at opportune times, the option for their clothes to be rent from their body instead of suffering wounds, or a personal favorite called “Blood Fetish,” where players gain +1 to their Grit stat every time they are involuntarily spattered with blood.

Add to this plenty of gear, armor, weaponry, dark powers, unholy relics and, of course, hellrides, infernal, biomechanical bikes with their own characteristics and even personalities. Some act as loyal pets, others transform into mechs and a multitude of other possibilities. Roadkiller, Angelbane, and Fleshstomper are some of the names you can choose from or give it your own demonic twist. Just make sure it’s appropriate for blazing a trail of destruction. 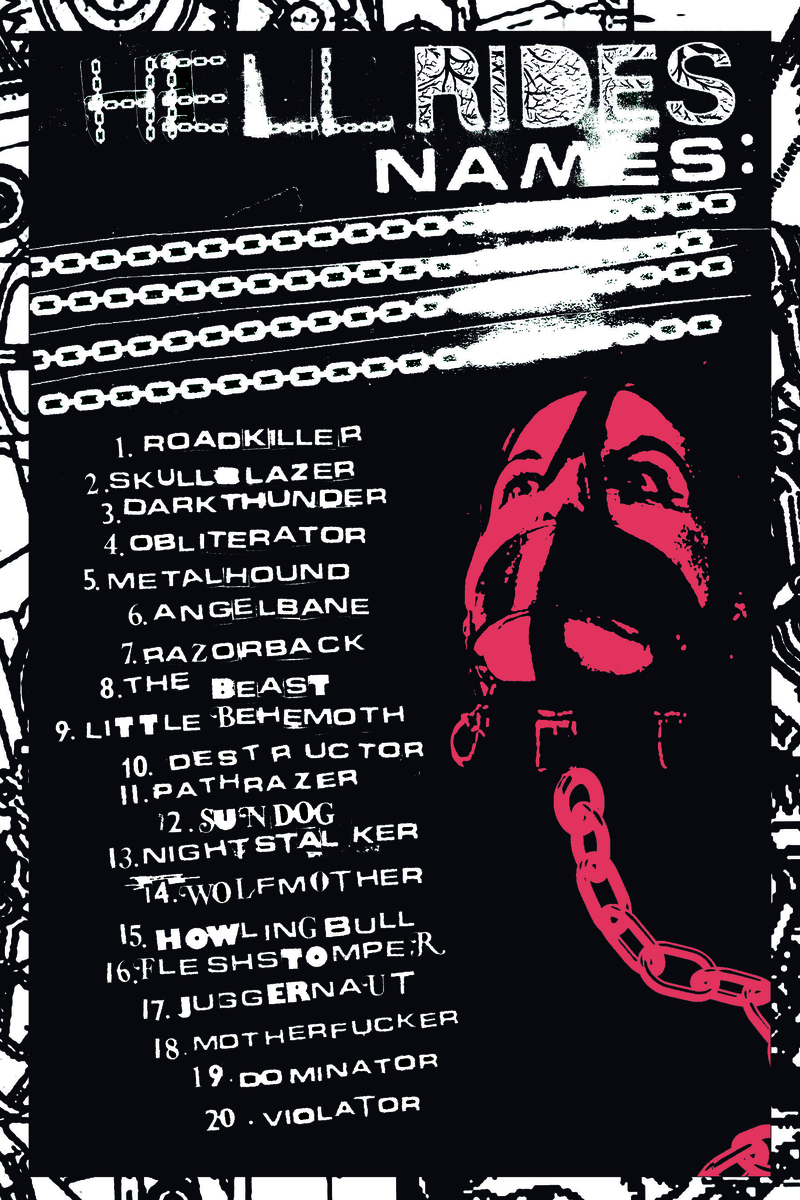 This is only a small sampling of the customization as there are tables for everything to fuel your devilish desires. But Hell Night is “rules-light” and the whole system is built for speed, so that even an inexperienced gamer can get a quick rundown and be ready to rock-and-roll in 15 minutes. It’s not a game for “min-maxers” or number-crunchers. Hell Night is a game for storytellers. For example: “Combat is fast, dramatic, and deadly. Roleplay it accordingly. Players should clearly, eloquently, and awesomely state their actions and intentions. The DM should describe the consequences in appropriate detail.” An aspect I really like about Hell Night is how players are charged with describing their successes, while the DM describes their failures.

While combat is highly lethal, characters aren’t one-hit wonders, dead and eliminated from play after an unfortunate dice roll. Failure in combat is compounded by an array of absurd and disgusting mutilations. Some examples from the Critical Hit table include: “Elbow obliterated. Bone and cartilage fragments rain down like confetti. Oh, and you´re bleeding your ass off” and “Leg severed above the knee. Blood sprays everywhere; the attacker tests Style or slips and falls. Cuidado: Piso mojado.”

It sounds pretty grim, but the action in Hell Night is not meant to be taken too deadly seriously. In addition to dark lore, a healthy dose of dark comedy is promised.

While campaign play is possible, should players want that, the game is really designed for high-octane, single-session action and excitement. Not only does this cater to the limitations of increasingly overstuffed schedules, Quiroga wants the game to be accessible to non-RPG players as well, who might be intimidated by the commitment of a long campaign without knowing what they’re getting into. Hell Night is about letting your imagination run amok for a couple of hours one evening with friends, chucking some dice, and describing the infernal carnage in as much ridiculous, hilarious, and cinematically awesome detail as you can. It’s not about thumbing through rules compendiums so much as creating a direct, visceral shared experience. Quiroga puts it succinctly, “It’s about creating great stories.”

The visual style of Hell Night is buoyed by a youth spent gazing at heavy metal album covers and horror movie VHS boxes from the ‘80s as well as other fantasy art from that era. Anyone who grew up during that time remembers spending hours staring at album covers or the magic of opening that gatefold and seeing the additional panoramic artwork within. And, of course, the reverie of artwork as you combed the shelves of your local video store. “Nostalgia is important,” Quiroga says of leaning into that miasma of imagery. “It got imprinted on our generation.”

The Hell Night book itself is going to be chock full of amazing artwork. Quiroga sees this as “First an artbook, then a rulebook, using style to convey a sense of what the setting is about.” Every page will feature work from one of fifteen artists creating pieces for the book from countries all over the world: Poland, Indonesia, Argentina, France, Columbia, Mexico, the U.S., and others. The zine movement influences the layout and design with a collage aesthetic and unconventional typographical elements and layout. “My graphic designer is an old school fanzine artist and works with traditional cut & paste technique,” says Quiroga. 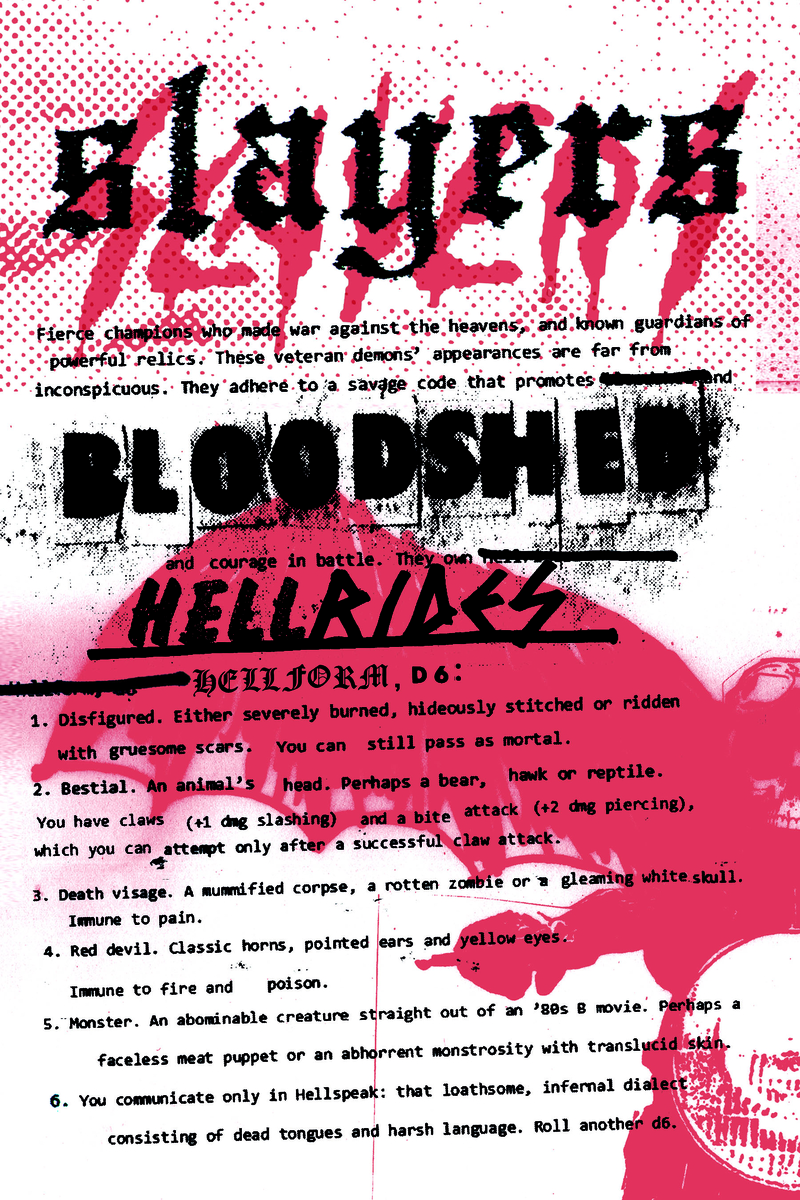 Backers of the Hell Night Kickstarter campaign will receive what promises to be a beautiful, offset-printed hardback (an upgrade when 666 backers was reached). Downloadable PDF and print-on-demand copies may be available once the campaign is fulfilled, as with Warpland and Neurocity, but this looks to be a wonderful, shelf-worthy physical artifact.

So strap on as much studded leather as you can find, rev the accelerator on your hellride, ignite the exhaust, and cue the double bass pedal. This Hell Night is going to be an EschaTON-of-fun!

As of this writing, there is still no word on the whereabouts of the Prince of Darkness.