He's Green, Hairy And Unlike You've Seen Him Before: THE MEAN ONE 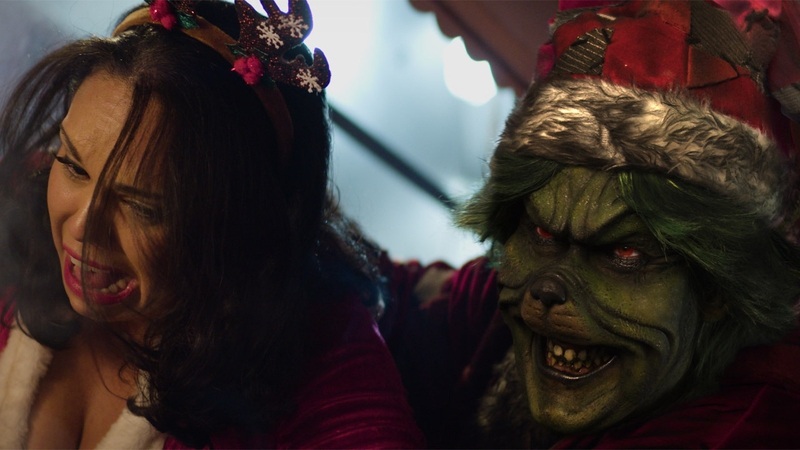 This holiday season looks to be rich with brand new seasonal horror! The latest announcement to join the ranks of killer Santas stars Terrifier's Art The Clown (David Howard Thornton) as The Mean One. As in, "you're a mean one, Mr..." The heart-chilling tale of how The Mean One slashed Christmas.

That's right, director Steven LaMorte is serving up an outrageous slasher parody, which will be released for free everywhere in the U.S. on December 15th, gifting the film to all horror fans this holiday season. Thornton plays a certain hairy, green, grump, donning a Santa suit and living in isolation atop a mountain overlooking the town of Newville. Young Cindy You-Know-Who's (Krystle Martin) parents were butchered by The Mean One, twenty Christmases after the massacre, she returns to town in search of closure. Cindy is about to discover this mean green fiend with a heart two sizes too small is still quite eager to carve the roast beast.

Directed by LaMorte with a script by Flip and Finn Kobler, The Mean One stars David Howard Thornton, Krystle Martin, Chase Mullins, John Bigham, Erik Baker, Flip Kobler, and Amy Schumacher. XYZ Films' Manager of Acquisitions and Development Alex Williams notes, "As a passionate fan of seasonal horror (and the Terrifier franchise), The Mean One is exactly the kind of film that lands on my personal “nice list.” This movie is a stunningly great time with a ferociously subversive turn from David Howard Thornton - and XYZ Films is so proud to be bringing this soon-to-be iconic Christmas slasher to audiences this holiday season."

Keep a look out for The Mean One this December 15th.