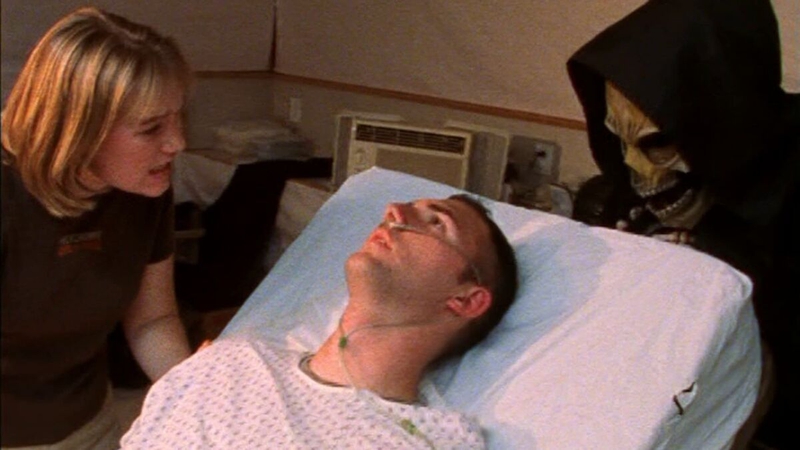 Editor's Note: This was originally published for FANGORIA on November 15, 2002, and we're proud to share it as part of The Gingold Files.

The documentary Hell House is the kind of movie where the reviews can tell you as much about the critic as they do about the movie. The publicity and marketing materials cite one reviewer who praises the film’s even-handedness, and another who calls it “a real-life Waiting for Guffman.” When a movie deals with a subject as touchy as religion, a viewer always brings one’s own prejudices along, and I must admit I walked into Hell House thinking, “Isn’t it a bit hypocritical for a church group to use staged terrors to convey their messages, when these are the same type of people who rail against horror films?” Yet while George Ratliff’s film doesn’t shy away from the foibles and occasional contradictions of his subjects, his presentation doesn’t judge his real-life characters; their methods may seem extreme, but he doesn’t poke fun at their motivations.

Ratliff’s movie is arriving in New York at the tail end of its regional run, much like the equally spiritually informed but otherwise very different Omega Code; the supposition is apparently that Manhattan audiences will be the least receptive to films with religious themes. Here, the focus is on the Hell Houses that have been constructed each Halloween by a Dallas-area Pentacostal church since 1990, using the haunted-attraction venue as a vehicle for expounding on the wages of sin. This particular house gained notoriety when it staged a recreation of the Columbine High School massacre, which piqued Ratliff’s interest and led him to follow the 2000 edition from inception through presentation. Shooting on digital video, Ratliff has explored every aspect of the process, and along the way provides a revealing, non-judgmental look at the people behind it.

Centering on the Cassar family (one quibble: the participants aren’t identified by name on screen), Ratliff presents a group who are devoted to their cause and throw themselves into this vehicle with the fervor of regional horror fans creating a DIY movie. Only here, the ghoulish tableaux are devoted to sinners—drunk-driving crash victims, a girl who has an abortion, a “Gay Man With AIDS”—who are plagued by demons that will drag them to hell unless they accept God. These productions are big deals for both the people directly involved and the local high school students who vie for the many roles; we see scriptwriters arguing over the correct nomenclature for Magic: The Gathering, fresh-faced kids pouring their hearts into auditions for roles like “Suicide Girl” and “Abortion Girl” and construction crews assuring that performers playing souls trapped in hell will actually be safe under the house’s plexiglass floor.

It would be easy to view their activities as laughable expressions of religious hysteria—except that Ratliff allows us to get to know the people behind them, who we see as decent folks motivated by spiritual convictions that have a genuine place in their lives. They’re not crazed zealots, just serious about the messages they’re attempting to convey. At the same time, Ratliff doesn’t shy away from the fact that the teen performers are in it at least partially for the fun, and their enthusiasm feels real. Sure, the auditions seem over-the-top—but no doubt the tryouts for some school plays (and, heck, some low-budget horror films) aren’t any more exaggerated.

Occasional contradictions inevitably come to light, which Ratliff chooses to simply present at face value rather than comment on. One key participant, for example, spends some of his spare time as an amateur wrestler, bashing and getting bashed for small but vocal audiences (“giving the people what they want,” he describes it) before returning to his church pursuits. The movie is at its most interesting, however, when it shows us how working in the Hell House is both informed by and serves as catharsis for the people involved. One girl, a sexual-assault victim, describes how performing at the House helped her come to terms with the traumatic incident. And one of the movie’s most moving—and slightly chilling—moments comes when a father of several children, who we learn was abandoned by his wife for an Internet romance, watches a setpiece involving a broken family that he helped stage.

Ratliff’s open-minded approach, of course, leaves it up to viewers to decide how to take all this, and certainly some may find the Hell House group’s activities ridiculous, misguided, perhaps even dangerous. But one of his achievements is to not only appeal to but encourage an open mind. Late in the movie, a group of teens angry and offended by what they’ve seen in the House confront one of its creators, all f-words and raised middle fingers. A lesser documentarian might have shown only the most volatile part of the confrontation, but Ratliff lets the whole scene play out as the churchman calmly explains his side of things. He points out that the scenarios are all about people being given a choice, and the teens leave in a more subdued state; they haven’t been converted, but they have been given something to think about. The movie works the same way.