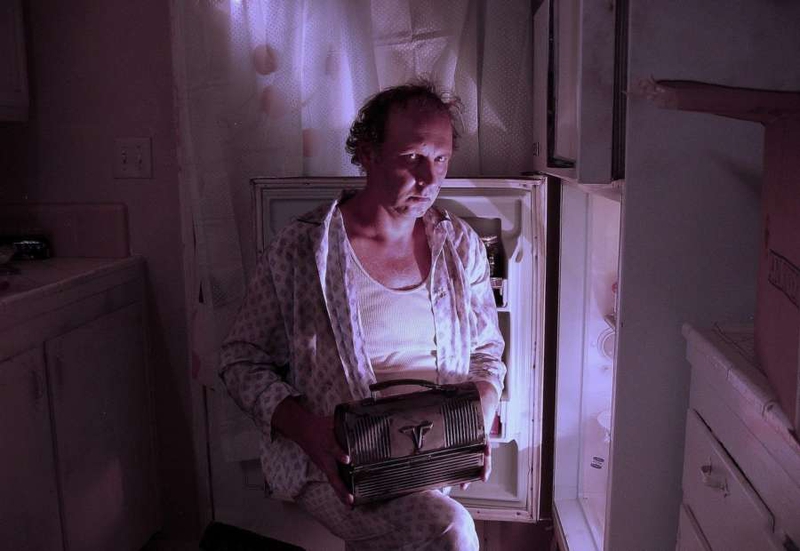 Editor's Note: This was originally published for FANGORIA on January 29, 2008, and we're proud to share it as part of The Gingold Files.

Deadly End may be a disappointingly conventional new title for the movie originally known as Neighborhood Watch and now hitting DVD from Lunatic Releasing. But for writer/director Graeme Whifler, it’s a happy end for his film’s three-year odyssey to commercial release, and he’s especially pleased that his upsetting (in more ways than one) feature is hitting disc uncut and uncensored. Indeed, finding brave souls to bring his vision to the screen proved challenging from the very start.

“It’s not the kind of movie people would necessarily bet on,” Whifler admits. “And it’s something you could never do in the corporate studio world, because they could never go to their stockholders and say, ‘We just did a movie about diarrhea.’ They’re not going to go for that.”

Stomach distress is just the beginning of the afflictions visited upon Bob and Wendi Peterson (Jack Huston and Pell James) after the newlywed couple move into their new suburban home. The agent of their suffering is Adrian Turnbull (Nick Searcy in a truly unnerving performance), their at first friendly-seeming but thoroughly deranged new neighbor. He starts out by gifting them with homemade chocolates laced with poisons, moves on to tainting their water and then…well, suffice it to say that his hobbies include performing gross surgeries on his own body, and he ultimately isn’t satisfied with only mutilating himself.

In addition to its disturbing horror, Deadly End (which inspired both raves and fainting at the numerous festivals it has played) showcases a rather caustic view of small-town life. “I did grow up in suburbia,” Whifler acknowledges, “but I just like torturing really nice people for some reason, and that’s a fun place to do it. I wanted to establish a really nice, white-bread couple, the kind of people whom nothing bad could ever happen to, but whom I believe, deep down, the audience likes to see suffer.”

And if that kind of uncompromising approach makes it hard to launch a project (it took over a decade to get the Deadly End script produced)…well, Whifler is the last one to compromise. “I don’t think those sorts of thoughts,” he says. “The only thing I consider is if it makes me giggle, or if I feel like my mom’s going to scold me for what I’ve done; then I know I’ve done something good. But she’s dead, so she can’t scold me.”

The gallows humor with which Whifler laces his conversation is very much evident in his movie as well. And considering how determinedly off-Hollywood Whifler’s sensibilities are, it’s a tad ironic that he got his start the same way as many of his more commercially minded counterparts: in the music-video world. “I started by doing videos for a San Francisco band called The Residents,” he reveals. “That was a great experience, because they had a warehouse that I turned into a stage, and I was given a stipend to use. I built an office there, created sets and shot and edited them myself. It was all kind of a one-man show, except for the actual production, where we’d bring in a regular crew.”

It was also in San Francisco that he found the inspiration for his first produced script, Sonny Boy. “I lived right across the street from a biker house,” he says. “I got to know a whole bunch of those guys, and incorporated some of them into characters in Sonny Boy. And somebody who had come from Indiana told me a story about this kid who had been kidnapped and raised by this guy that everybody in Indiana knew, who was a car-thief middleman. Cars would come to his property, and he would sell them off. And he got this kid, tortured him and turned him into a killer, and everyone in town knew who he was; he kept a sawed-off shotgun under his coat, and they all stayed away from him because he would kill you.”

Whifler turned that scenario into the strange tale of a desert-town crime boss named Slue who raises a baby found in the back of a stolen auto to be his personal hit man. The young man (played by Michael Griffin), whose tongue has been cut out by his “father,” obediently commits assorted acts of mayhem and thievery, but he also exhibits a sympathetic streak, and even catches the eye of a pretty local blonde (Alexandra Powers). Just as eccentric as the storyline is Sonny Boy’s ensemble, including Paul L. Smith (Pieces) as Slue and character actors Brad Dourif and Sydney Lassick; in the oddest casting of all, David Carradine co-stars in drag as Slue’s wife Pearl, with no one on screen acknowledging him as a transvestite!

It almost seems as if the viewer is supposed to accept Pearl as a woman, but Whifler says that as far as he saw it, the character “was a man in drag. In the original version, he was wearing black rubber breasts with milk in them and would feed the baby with them, and there were problems with the censors on that. They went through and cut all these little things out that weren’t violent, but were supposedly too disturbing.”

That’s not the only way Sonny Boy changed between Whifler’s script and the eventual film, which was helmed by Robert Martin Carroll, briefly played theaters via Trans World in 1989 and has yet to appear on U.S. DVD. “I wanted to direct it,” Whifler says. “I talked to the producer, who had all these gold chains and was smoking a cigar, and said, ‘You’ve got to let me direct this movie; I mean, if I don’t, it’s like Blake Edwards directing Blue Velvet.’ And without a beat, this guy says, ‘If Blake Edwards had directed that, it would have made some money.’

“So I didn’t get to direct it, and they didn’t even talk to me after that,” he continues. “About a year and a half later, I finally got into a screening and the guy next to me was from the studio, and I kept whispering, ‘I’m going to kill this f**king director.’ But it was actually the producer’s fault; about five or six years later, out of the blue, I got a letter from the director, and he basically said, ‘Graeme, I’m really sorry, it wasn’t my fault; they told me if I ever tried to call you, I’d be fired.’ I don’t want to mention this producer’s name, but he was as low as you can go but still be above ground.”

Among the changes Whifler recounts is the onscreen appearance of the title character. In the film, “the little boy grows up to be a guy who looks like a cute surfer, but this was a Frankenstein movie, and he was supposed to have a Frankenstein [monster] face,” he says. “He should have been absolutely tortured and cut up, but they didn’t want to go with that. And there was no romance; the whole sexual thing was very different. It was much more…primitive, let’s say. It wasn’t romantic sex; it dealt with smells and stuff like that.”

Whifler tried again with a spec script called Dr. Giggles, which was acquired by Dark Horse and eventually emerged, after being “completely rewritten” by director Manny Coto, in 1992 from Universal as a generic teen-slasher opus with a medical gimmick. “New Line had it at one point,” Whifler recalls, “and I went into the first meeting and sat at a long table. The head of development, this little old biddy woman, was there, and she said, ‘The first thing I want to tell you, Graeme, is that as long as I’m involved with New Line, we’re not going make a movie with anybody picking at their scabs.’ OK, so New Line didn’t do it, then when [Universal] finally made it, this guy in charge of development said, ‘I really don’t watch horror movies, and I want to tell you that right off the bat. I don’t like those kinds of movies, but I want to make this one and I want a big body count and I want it to play in grindhouses.’ ”

By that point, of course, the grindhouses were dying out, but the studio did get the multiple murders it wanted—which weren’t part of Whifler’s original concept. “I can’t really go into how different it was,” he says, “but it was very different, and it didn’t have a body count. I think one person died in it.”

Whifler’s preferred approach is a slow buildup to ghastly events, as seen in Deadly End, in which viewers “don’t necessarily see the gore coming,” he says. “They get sucked in, and sucked in; we seduce them, and by the time we’re ready to start the bloodletting, they get really upset. It’s a surprise—but you should know that when you see a movie with diarrhea in the first half, something bad is going to happen.”