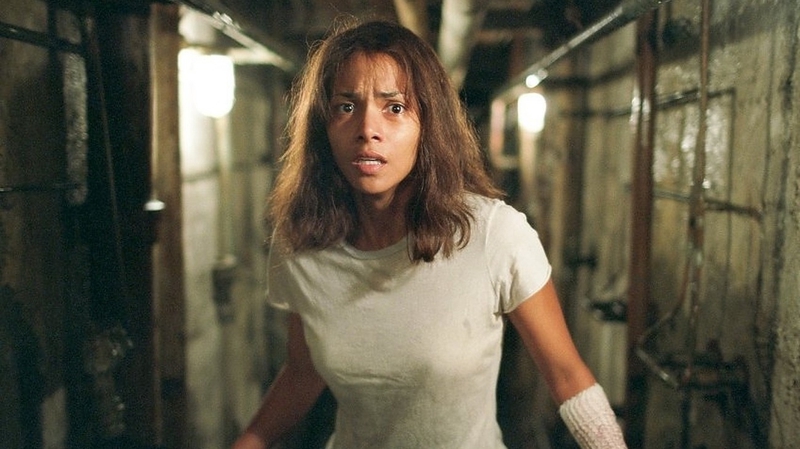 Editor's Note: This was originally published for FANGORIA on November 21, 2003, and we're proud to share it as part of The Gingold Files.

Gothika represents a step up in class for the Dark Castle fear-film factory, and not just because it has an Oscar-winner in the lead (after all, House on Haunted Hill had Geoffrey Rush). In focusing on the psychological terrors suffered by a woman whose very profession is turned against her, it promises to plumb deeper fears than the spooks and slaughter that marked the entertaining House and the lesser 13 Ghosts and Ghost Ship. And for a while, thanks to solid craftsmanship, it casts a chilly spell as criminal psychologist Miranda Grey (Halle Berry) struggles to retain the sanity that she had previously judged in others. Yet the longer it goes on, the more a person or persons involved apparently felt it had to be a ghost story too, with the requisite, by now familiar and here implausible trappings, and the faster it loses its hold.

Berry, taking her first lead in a major-studio film, is sufficiently compelling as Dr. Grey, who is first seen interviewing Chloe (Penélope Cruz), an inmate of the psychiatric ward of a woman’s prison. Chloe’s been having nightmares about a satanic presence brutally assaulting her—fantasies that, because horror films are all about foreshadowing, you know are going to play into the scenario later. But Dr. Grey doesn’t let her disturbed and disturbing patients get to her, and, being married to the prison’s chief administrator (Charles S. Dutton), manages to sympathetically keep fellow doctor Pete Graham (Robert Downey Jr.), who has an obvious crush on her, at arm’s length. Of course, her orderly world isn’t going to stay that way for long: After a rainy-night encounter with a scarred, bedraggled girl, Dr. Grey blacks out and wakes up a few days later—now incarcerated in her own facility, having brutally murdered her husband.

Sebastian Gutierrez’s script gives the genre standby of trapping a sane person among the insane an extra urgency by making Dr. Grey one of the very patients she had heretofore been treating. The drama of this rational woman applying her training to an irrational situation—in which she is doubted by others, much as she had doubted her subjects before—supplies some of the creepy drama, though French director Mathieu Kassovitz is just as interested in the visual possibilities. Making his own debut at the helm of a Hollywood production, Kassovitz, working with cinematographer Matthew (Requiem for a Dream) Libatique, drenches Gothika in all the oppressive atmosphere its title suggests, sending the camera prowling through the institution’s halls and trapping Dr. Grey in a threatening realm of shadows.

For a while, anyway. It soon becomes clear that that distressed girl isn’t through with Dr. Grey, and keeps turning up to alternately torment her and lead her toward clues to a larger purpose. Yep, the spirit has a score to settle, and won’t rest until a) justice is done and b) Dr. Grey has been further traumatized. While all this is unfolding within the prison’s walls, Gothika is properly spooky; but once Dr. Grey has to make a break to track the girl’s tragedy to its source, it loses its claustrophobic hold. Free of the prison’s divertingly atmospheric confines, the audience also has time to ask the questions that afflict many such stories. To wit, if the spirit can manifest direct clues like carving “NOT ALONE” into Dr. Grey’s arm, why not simply send a more explicit message about what’s bothering her? And why subject the innocent Dr. Grey to such stress? (Actually, if you read between the lines, there is a plausible reason for that, one that the filmmakers might have benefitted from exploring further.)

The revelation of how the dead girl got that way incorporates a few potentially disturbing revelations, yet after previously taking a somewhat suggestive approach to the storytelling, Kassovitz settles on a disappointingly literal tack that reduces the proceedings to melodrama. The film comes to seem more like his slick but conventional big-ticket French thriller The Crimson Rivers than his earlier, down-and-dirtier and more overall effective Hate (La Haine). The script lets him down in the final act, too, particularly a lengthy scene involving an all-too-predictable twist that also puts the audience in the unfortunate position of feeling smarter than its “brilliant” heroine. The whole thing is topped off with a final scene that screams “postproduction reshoot” and is illogical in too many ways to count.

Gothika does represent a step up from Dark Castle’s Ghost duo, and it’s too bad that this attempt to enroll the company’s prior visceral approach in the Sixth Sense/Others school of atmosphere doesn’t quite take. All the elements are in place, including a lush, scary score by John Ottman and good performances all around; this may be the first time Cruz’s heavy accent, which gives her something of an “otherworldly” presence, has really worked in an American studio project. Here’s hoping that next time around, Dark Castle will apply such resourceful execution to material truly deserving of it.