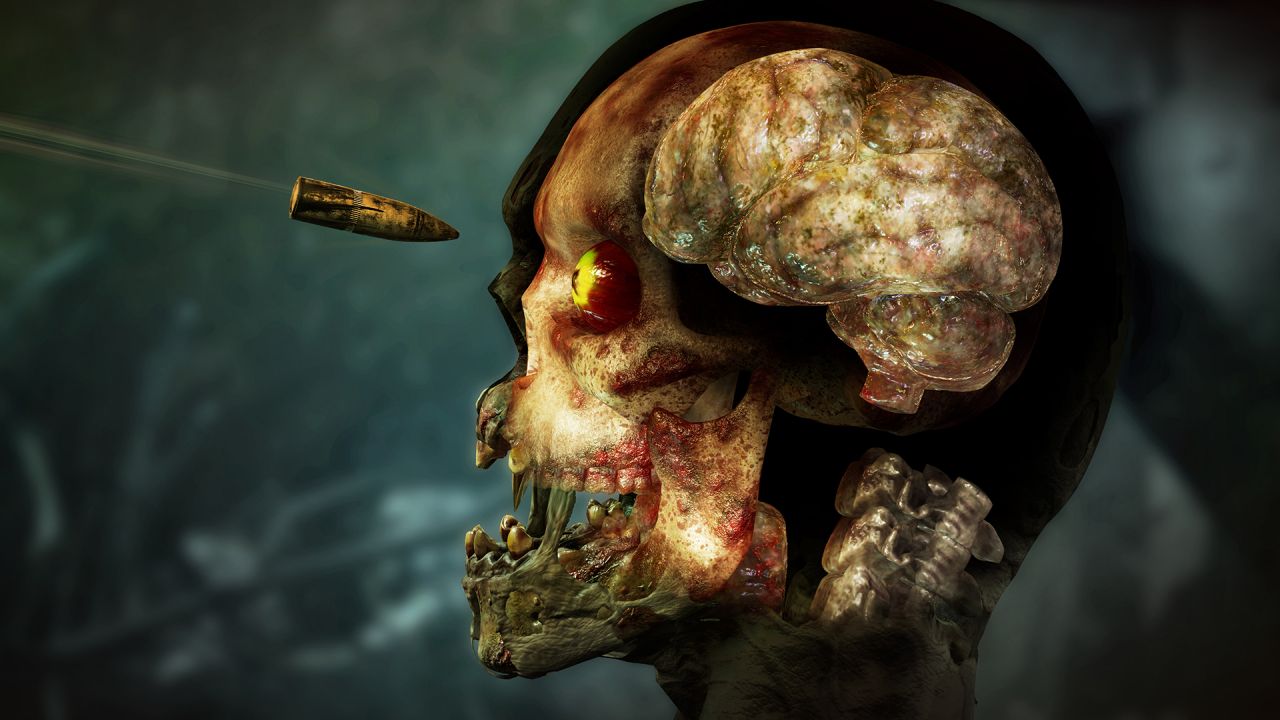 The X-ray Kill Cam is back to get you an inside view of the action in "Zombie Army 4." (Photo: Rebellion Developments)

reetings, gory gamers, and welcome to the first GorePlay column of 2020. It looks as if it will be a banner year for horror gaming, with Doom Eternal, Dying Light 2, The Last of Us 2, and the Resident Evil 3 remake all promising big production values to go with generous splashes of the red stuff. Heck, even the Tom Clancy universe will be going genre this year, with Quarantine applying the late author’s black-ops military aesthetic to a tale of flesh-eating alien parasites. For now, here is what’s been happening where the giblets meet the joypad.

The Zombie Army games have evolved gradually from a grisly bonus challenge in the Sniper Elite series to a franchise of their own, and the shift should please fans of WW2 horror movies such as Dead Snow or anyone who likes to explode undead heads in slow motion.

The story this time takes place in 1946, after the war. As a last resort, Hitler unleashed a zombie plague and now Europe is overrun. Alone, or with up to three other players, you must control various undead-battling heroes to put an end to the menace.

It's a simple set-up but one that has been smartly expanded for this, the first full standalone title to bear the Zombie Army name. The X-ray slo-mo kill cam returns, honed through numerous Sniper Elite iterations, all the better to see brain matter splatter and limbs get blown clean off. The game also takes more than a little inspiration from Strange Brigade, the four-player co-operative pulp adventure also developed by Rebellion, with a wider array of weapons, traps, and enemies.

It all feels more robust than the somewhat limited Zombie Army Trilogy, and more importantly, there are more options for melee combat now. In its earlier versions, the concept always suffered a little from having you using sniper mentality to tackle a bloodthirsty horde, and any time the situation demanded you switch to close-range survival, the control suffered. Now, you feel confident that you can take on the flesh-eating tide from afar or up close.

We’ve never been short of games that let you pulverize the undead, but Zombie Army 4 has enough gutsy action and unique features to earn it a place on any horror gamer’s shelf.

If Korean horror is more your cup of oksusucha, then The Coma 2: Vicious Sisters should be of interest. In the original game, you played as Mina Park, a student at Sehwa High School, who was relentlessly hunted through a shadowy alternate dimension by a demonic figure known as Dark Song, which looks uncannily like her teacher. For this sequel, Mina gets to finally escape the confines of the school and explore the surrounding area, which means more tense stealth as well as interactions with various NPCs. The game swaps between 2D action and RPG-style dialogue scenes, all depicted in an appealing Korean manga – or manhwa – style.

As with most narratively dense games, it helps if you have played the previous game, but the tropes are familiar enough that any genre-savvy player will soon catch up. It helps that Dark Song is a genuinely imposing threat, stalking you using decent AI and inflicting lasting damage that doesn’t go away with a simple toot of a health spray. It’s hard not to detect the Silent Hill influence, but unlike so many western games that riff on that series’ visuals and gameplay, this one borrows the concepts but delivers them in a very different way. The game is recommended for those who appreciate novel twists on age-old horror concepts.

Maybe you just want something dark, weird and cheap? Indie developer Somewhat has you covered. Please Follow is a short but bittersweet horror experience that costs just $1.99 on itch.iocasts. The game casts you as a soldier, in some unnamed war trench, who ventures into a mysterious tunnel and ends up in something that is equal parts Lynch and Lovecraft. With that in mind, don’t come to this expecting narrative clarity or neat closure. It’s a headfuck, delivered via woozily distorted PS1 visuals. Fans of experimental gaming should check it out.

Talking of David Lynch, the master of head-scratch cinema has turned his attention to virtual reality, with Twin Peaks VR now available for Oculus Rift, Vive and other PC headsets. Lynch has apparently been given creative control over the project, which means that while you explore a series of virtual escape rooms based on iconic locations from the show – including the Red Room – you can be sure that the virtual experience is used to deliver more than just shallow fan service.

Featured as one the best horror games of the decade in the last column, eerie horror adventure anthology Stories Untold is now out on Nintendo Switch. The game features a quartet of unnerving tales, told in ways that range from retro text adventure to first-person puzzling. All are connected by a constantly exciting willingness to use your POV and the meta-gameplay experience to catch you off-guard, misdirect you, and generally freak you out. On console, the game loses some of its more memorable tricks – particularly those that rely on you being at a keyboard while playing – but being able to have the game in your hands, up-close, adds its own frisson. If you have not played it before, get on it now.

There’s a renaissance of games claiming to offer a return to “classic survival horror” right now. It seems almost every indie horror game can’t wait to mention Silent Hill or Resident Evil in its promotional text, and that’s the case with Summerford, due out later this year. The title refers to a small English town that, in the game’s alternate history, was the location of a Chernobyl-esque nuclear meltdown in the 1980s. You’re investigating the site in the present day when this once-tranquil rural village has been reclaimed by nature – and, we suspect, some mutated creatures or maybe some otherworldly threats. The game will reportedly offer about four hours of story, but there are several routes to follow and different endings to earn. Look out for it in Q4, as business people in suits like to say.

For those who don’t know, a game jam is when a bunch of developers and artists get together to make a game in a limited amount of time. It might be hours, or it could be a few months. There’s usually a theme to work to as well. That was the case with the horror-themed Scream Solstice jam, which finished in December. You can check out and play all the entries at the official Scream Solstice page (https://itch.io/jam/scream-solstice/entries), but I’ll draw your attention specifically to a fun little VR vignette called ‘Mirror.’ You can play it in your browser using a mouse, but VR gives the best effect. It’s rough around the edges, as game jam titles always are, but like all the best VR experiences it uses your presence “inside” the game to deliver some effective, if predictable, jolts.

Watch the trailer and tell me you’re not jazzed about the chance to play as a man-eating shark. Coming from Tripwire Interactive, which previously delivered the bloody arena shooter Killing Floor, this could easily be a simple bite-happy arcade game, but it sounds like there will be a lot more to it. It’s a fully-fledged, open-world shark role-playing game, set around the Gulf Coast where your aquatic apex predator will evolve and gain new ways to devour wildlife and tourists alike. Look out for it on PS4 and Xbox One when it launches May 22.