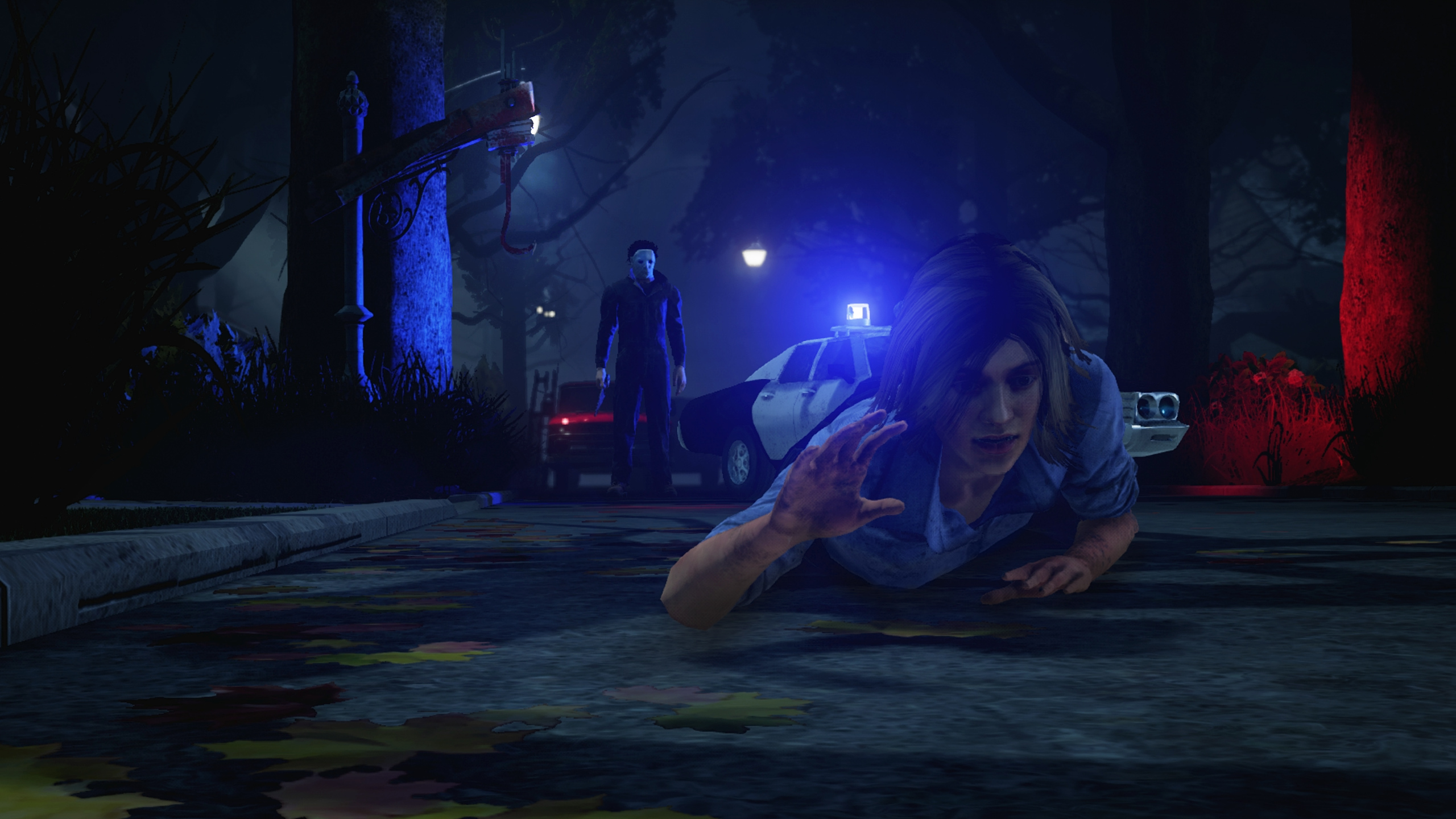 Michael Myers joins in on the fun of "Dead by Daylight."

t’s nearly the end of the year, but more than that, it’s nearly time to drop the blade on the entire decade. It’s been a whirlwind 10 years for horror gaming, with the genre enjoying a grassroots revival following a decline in the 2000s as the big fright franchises either slipped into obscurity or collapsed under the weight of too much action-oriented gunplay. With that in mind, here are 10 horror games from the last 10 years that left us shook.

The 2010s got off to a defiantly oddball start with this cult favourite from Japanese developer Hidetaka “SWERY” Suehiro. Playing as FBI agent Francis York Morgan, you’re on the trail of a serial murderer known as the Raincoat Killer in small-town America. It’s an open-world game, you’re free to walk and drive all over the town of Greenvale, and non-player characters follow their own schedules as time ticks by. What makes Deadly Premonition so unforgettable is its eccentric characters, stilted story scenes and frequent diversions into baffling and clunky supernatural horror. Imagine Silent Hill remade as Twin Peaks fan fiction by someone who only ever played 1990s Japanese horror games, and you’ll have a vague idea of what to expect. Bizarre and brilliant in its own clumsy way, there’s been nothing like it before or since.

One of several homebrew indie hits that took players by storm at the start of the decade, Slender is very much the Blair Witch Project of gaming: unapologetically lo-fi, driven entirely by atmosphere, and very underwhelming if you come to it without understanding its context. Inspired by the same creepypasta stories that have since been driven into the ground, the original Slender was put together using the free Unity software engine and uploaded for free. Passed around by fans long before coming to mainstream attention, there’s a primal punk simplicity to it: Explore a forest; find eight pages from a journal; don’t let the sinister faceless man with elongated arms catch you. After years of increasingly bloated and glossy franchise horror games, this was just the grungy shot in the arm the genre needed.

The impact of Slender could be seen a few years later, when Sony dropped a demo for this mysterious new horror game. Trapped in a suburban home where something horrible had clearly happened, you could only loop through the same L-shaped corridor over and over, each time triggering changes that became steadily more horrific. It was eventually revealed that this was a playable teaser (hence P.T.) for Silent Hills, a reboot of the iconic horror series with Metal Gear’s Hideo Kojima at the helm and maestro Guillermo Del Toro whispering ideas in his ear. Sadly, it wasn’t to be. Kojima and publisher Konami split acrimoniously, and Silent Hills never happened. The fact that people are still playing P.T., despite it being removed from PlayStation’s online store, and still finding secrets all these years later, is a testament to the eerie surreal dread this weird interactive promo evoked.

This resurgence of indie-minded horror, with its emphasis on vulnerability and abject terror rather than upgradeable weaponry and boss monsters, found its blockbuster outlet in this superb sequel to Ridley Scott’s 1979 movie classic. When the flight recorder from the Nostromo ends up on a remote, rundown space station, Ripley’s now-adult daughter, Amanda, is offered the chance to join the salvage team to go and solve the mystery of her mother’s disappearance. The genius of Isolation is in the name – it doesn’t swamp you with hordes of xenomorphs or give you ass-kicking Colonial Marine buddies to fight alongside. It’s just you, a handful of ill-fated survivors and one very mean Alien trapped together on a moribund outpost. And that Alien isn’t a scripted bad guy – it’s a free-roaming AI creation that appears at will, hunts you down, and vanishes into the vents when it feels like it. Breaking all the predictable rhythms that similar games have led us to expect, Alien Isolation keeps you permanently on edge, an interactive panic attack dressed in studio franchise clothing.

OK, OK, this one got more than a little played-out thanks to overexposure and too many shrieking YouTubers chasing likes by hamming up the jump scares. Creator Scott Cawthon arguably didn’t help, churning out three sequels in the space of a year. Don’t let that detract from the fact that this is one of the most successful and influential horror games of the last 10 years. Cast as a security guard who must man the CCTV station at a Chuck E. Cheese-style pizzeria for the titular five nights, you soon discover that the job has a high turnover rate because the restaurant’s animatronic mascots come to life at night and try to kill you. Stuck in your booth, you must keep them at bay using cameras and door controls only. What’s especially remarkable is that this brutal and intense horror experience became a huge cult hit with kids and tweens. In another 10 years, there’ll be a generation of genre fans who can trace their love of horror to Five Nights at Freddy’s. For that alone, it deserves celebration.

One of the rallying cries at the launch of any new gaming hardware generation is that it will usher in games that are indistinguishable from movies. Put aside whether that’s something games should even be attempting, and this digital slasher romp is the closest we’ve come to delivering that promise. A bunch of young adults reconvene at a mountain lodge, one year to the day after one of their number died in a tragic accident. Sure enough, weird shit starts to happen, blood is spilled, and plot twists pile up on each other as the body count rises. Or does it? In Until Dawn, you control all the characters and it’s entirely possible for everyone – or no one – to meet a grisly fate. These are characters you’ll care about, too, or at least treat as real people. Stars such as Rami Malek, Hayden Panettiere and Peter Stormare lend their realistic faces and motion-captured bodies to the game, while the story was co-written by none other than indie horror legend Larry Fessnden. Riffing on everything from The Evil Dead to Saw and more, Until Dawn is a love letter to horror movies and a game that rewards multiple playthroughs.

Another trend which bubbled up during the decade was asynchronous multiplayer – a fancy term for games where instead of being split into equally balanced opposing teams, one group of players is instead pitted against a single player who is controlling an unusually powerful foe. That concept is basically the template for hundreds of horror movies, and Dead by Daylight bridged the two by offering online slasher showdowns where one player is the masked killer, and everyone else has to try to escape – either by working together or by being utterly selfish. The game has its own rogue’s gallery of slashers to choose from but has also offered movie-licensed add-ons, including Michael Myers, Leatherface, Stranger Things’ Demogorgon, and Ghostface from Scream. Honorable mention must also go to the crowdfunded Friday the 13th game, which applies the same format to Crystal Lake and Jason Voorhees. Neither game is what you could call “polished,” but when you’re trying to fix a car while a dude with an axe stalks towards you, who cares about that?

Resident Evil broke new ground in the ‘90s where horror and gaming were concerned. For years, it was the benchmark by which horror games were judged. But then it lost its way, survival horror became co-op action, and the scares drained away. Reenergized by the wave of gruelling indie horror, Resident Evil 7 found the series completely reinvented, riffing hard on Texas Chain Saw Massacre and switching to a first-person view as you found yourself imprisoned by a crazed backwoods family in a rotting mansion full of secret passages and booby traps. Genuinely gross and truly scary, it was nothing like previous Resident Evil games and was better for it. As a bonus, the entire game could also be played in VR, where the attention to detail and claustrophobic squalor was even more stomach-churning. The game is proof that even the most exhausted franchise can roar back to life with the right inspiration.

Not all horror has to be visceral, or even physical, as this unnerving collection of four interlinked text adventures shows. Wait, text adventures? Yep. This is a throwback to that ancient gameplay form where you read a description of a scene and then type in what you want to do. There’s a meta-twist here though, since the screens you’re playing the adventure on are themselves in the game. For example, the first story has you sitting at a desk playing a game called “The House Abaddon” on an old British 8-bit home computer. What happens in the text adventure begins to influence the “real” world where you’re sitting at the desk. Look, just play the damn thing, and you’ll see. It may not be the most famous game around, but it plays tricks with your perception that would be impossible in any other genre. Subtle but devilishly ingenious.

Finally, and much like Stories Untold, Doki Doki Literature Club is a game that smuggles disorienting horror into an otherwise unassuming genre. In this case, it’s a manga-styled visual novel, all bubble-gum colors, cute girls, and cheesy dating scenarios. Your POV is a shy boy who is invited to join a book club by his crush, Sayori. You talk to the girls, work out what sort of things they like, put together poems designed to make them like you … and then Sayori kills herself, your game resets, and your save file is deleted. Play through again, and Sayori is gone from the story, and nobody else remembers her. And that’s when things start to get seriously fucked up. Released as a free download, Doki Doki is perhaps the most disturbing game on this list because it gives you no warning of what you’re getting into and both looks and plays like something far more innocent. Much like Miike’s Audition, it delights in subverting your genre expectations and adds a metafiction twist in which you, sitting at your PC in the real world, are drawn into an increasingly dark and twisted narrative. It’s certainly evidence that horror in games has come a long, long way and is now one of the richest, most daring genres around.