HUSH Director Mike Flanagan on the Scary Sounds of Silence 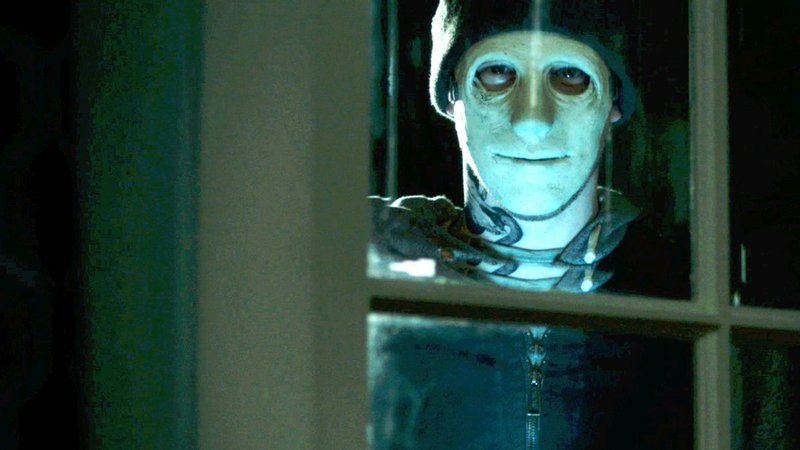 Editor's Note: This was originally published for FANGORIA on April 7, 2016, and we're proud to share it as part of The Gingold Files.

Making a movie with one speechless heroine facing one menacing attacker over one night in one house—even one as frightening as Hush—should be a fairly simple proposition, right? Not according to director/co-writer Mike Flanagan, who reveals the particular challenges of the film in this exclusive interview.

Hush stars Kate Siegel (who also scripted with Flanagan) as an author who can neither hear nor speak, which puts her at a particular disadvantage when she’s terrorized by a masked attacker (10 Cloverfield Lane’s John Gallagher Jr.) at her house in the woods (see review here). Produced by horror mogul Jason Blum and Trevor Macy, who previously teamed with Flanagan on the haunted-mirror opus Oculus, Hush was shot in secret last year and knocked out those who caught it during its world premiere at this year’s SXSW festival. There’s a touch of irony that it sees release tomorrow, as that was supposed to be the opening day for Flanagan’s Before I Wake, which has been caught up in producer/distributor Relativity Media’s bankruptcy woes. For now, Hush demonstrates that he can wring true terror out of a basic premise—though again, it wasn’t as easy as it looks…

Was Hush’s simpler, more straightforward narrative than your previous films an intentional change of direction?

Yes; when Kate and I started talking about this story, I thought it would be a great opportunity to play with minimalism. We wanted to pare everything down, play with the sound design and focus on the visual storytelling, and get into that whole concept of pure cinema that Alfred Hitchcock would talk about. So while the narrative is certainly a lot more straightforward than my other work, the process of making it was actually way more complicated.

The way we had to break down the visuals for this movie, we knew there was no way to tell the story with words, and with Kate being unable to speak, that would take away half her tools as an actor. Because we would be in one location with a character who couldn’t talk, the camerawork needed to be way more specific than the way you typically approach a movie like this. The coverage had to evolve every five or six minutes, so that people wouldn’t get bored being in this quiet environment.

Also, with sound design, you typically want it to help enhance the storytelling while not calling attention to itself, and in our case we had to do the opposite. It was going to be front and center, and people would be focusing very intensely on areas of the audio that typically they process on a more subconscious level—things like footsteps, ambients, crickets, wind, the way the house settled. All of that was going to become center stage instead of background, which meant that even when we imply silence—when we give you Maddie’s kind of audio perspective—that “silence” is a combination of something like 45 different sounds. So constructing what seems like the simpler part of that sound design was actually very elaborate.

The reason for that was, if we just pulled the sound out, it wouldn’t make the audience feel like they were living in a silent moment; it would make them hyper-aware of the noises they themselves were making, eating popcorn and hearing people shifting in their seats and coughing. So we had to come up with audio effects that would imply silence while also completely engulfing the audience, so that they would listen to our sound design and not their own. So that Maddie’s-perspective sound you hear in the movie is a combination of so many elements; we used audio from ultrasounds, I think we used glaciers cracking underwater slowed down—things that give you the impression, when you watch the movie, of these moments when the sound drops out, when in reality, you’re hearing a much more complicated soundscape than I’ve ever had to build for any of my movies.

And that was just for the quiet time. For the rest of it, when Maddie is moving through the house and so on, we had to keep the camera moving to keep the movie dynamic, so we had a Steadicam operator with Kate the whole time, and he had a spotter, and we had a boom operator trying to navigate around the camera crew. That meant that every time Kate moved from point A to point B, five people went with her, and our production audio was largely unusable; it sounded like a herd of elephants moving through that house in every shot! I would also be calling out cues for Kate and John and the camera in the middle of takes; some of that choreography wasn’t possible otherwise. So all of that sound had to be rebuilt in post, using our production audio just as a guide track. When we went into our first round of sound design, we had to do ADR with Kate just to get her breath back into the movie. It was a bizarre ADR session for her, to spend a couple of hours just breathing different ways.

So the simplicity of the movie is, from a technical point of view, very misleading. One of the things that was so interesting about the film was just how much work it takes to make something look simple [laughs]. That was a fascinating learning experience for me.

How did you arrive at the decision to feature a deaf and mute heroine?

I had always been fascinated by examples, mostly in television, of characters having no dialogue, like the episode of Buffy that was also called “Hush,” and the “Battleground” pilot of Nightmares & Dreamscapes, where it’s William Hurt up against an army of toy soldiers, without a single word for an hour. What I love about that is that it forces you to create a hypnotic experience for the viewer, so for years, I’ve wanted to see what would happen if I removed dialogue from the equation. It’s something we lean on so much as filmmakers; we’re in a visual medium, but we tell most of our stories verbally. I thought it would be an awesome challenge to remove that.

In the beginning, we didn’t know how that was going to go; I thought I could fall on my face. That was among the reasons we didn’t tell people about the movie when we started; we didn’t know how it was going to turn out. It felt risky and experimental, and there was enough about the aesthetic, and the sound design in particular, that we didn’t know how we were going to pull off when we got started. So it was like, “We should probably do this quietly, because if this goes south, and we’ve made a big deal out of it, it could be embarrassing.”

Siegel gets an “Introducing” credit on Hush, even though it’s not her first acting gig…

Yeah, we talked about that back and forth, and we felt pretty much what you wrote in your review, actually—that this was really going to be her true introduction. She’s had parts in other things, like Oculus, but she has never had the chance to take on a lead, and certainly never had the weight of a movie on her the way she does here. So that was something she and I agreed on going in: Even though it’s not her first appearance on screen, it is her first starmaking turn.

How did you wind up casting Gallagher as her nemesis?

When John was first pitched as a possibility, I was a big fan of The Newsroom, and I thought, “Wow, I would have never seen that coming,” and I felt he was such an extraordinary actor that I wanted to see him play against type, and thought that could be very effective. When we sent him the script, he had read almost the entire thing and was still waiting for his character to appear; it never occurred to him that he was going to be playing the killer. He called us afterward and was like, “So you want me to be the neighbor?” and we said, “No, we want you to be the villain.” It took him a minute to realize what we were saying, and once that was clear, he was like, “Oh my God, I have to do this.” He gets cast as the nice, smart, funny guy so much that for him to play completely the opposite was something he was anxious to do. We were thrilled that we got him, because he’s one of the best actors I’ve ever worked with.

The house is such an important component of the film; did you construct any of it, or were you able to find one that fit what you had in mind?

Well, Kate and I live together, and the script, to the letter, was based on the house we lived in. When we went down to Alabama to shoot the movie—it was my third film down there—it was very hard to find a house that was anything like ours. It was actually pretty scary, because we didn’t find one until almost the last minute. It was out in the middle of the woods, pretty much as you see it, and we had to rewrite the script—and even change some big, serious plot developments—to accommodate the reality of that house. But it also gave us a lot; our house didn’t have a crawlspace, it wasn’t elevated the way this one was, and that gave us a huge new setpiece that wasn’t there before. So as many problems as it created, it also gave us a lot of opportunities too.