French writer/directors Julien Maury and Alexandre Bustillo are having quite a year. This summer, Kandisha—their first film shot in their native language since 2014’s Among the Living—opened in their home country and made its U.S. debut on Shudder. And their subsequent chiller The Deep House just had its world premiere as part of the Fantasia International Film Festival. This movie was shot in English, for one good reason.

“To make more money,” Maury laughs. More seriously, he acknowledges, “It was a decision we made with our producer, and obviously it was just in order to receive wider exposure. By shooting in English, it will be easier for us to show the movie worldwide, and we didn’t have any problems doing so.”

“In France,” Bustillo adds, “French horror movies are not successful in cinemas. The local audiences are like, ‘Uhhh, it’s French, and they don’t know how to make horror films. That’s more an American specialty.’ Our producer, Clément Miserez, thinks differently, so he said, ‘OK, the French audience doesn’t like French horror movies, so let’s do it in English so they’ll think it’s an English movie!’ It’s a tricky way to try to achieve success, and we understand that, because he put a lot of money on the table to make The Deep House, and it’s not the first time he’s done that. He also produced the two most recent films by Pascal Laugier, Incident in a Ghostland and The Tall Man, and they were shot in English, even though they were totally French productions.”

The Deep House stars Camille Rowe and James Jagger (Sound of Violence) as an adventuring couple who take a deep dive to explore the titular submerged dwelling, and awaken an evil spirit within its watery walls. “We’re always looking for original stories,” Maury says, “and we love to brainstorm, and this one came from the simplest idea: to combine our love of haunted-mansion movies and our passion for underwater sequences. We’ve always felt that shooting underwater brings a very different feeling; it’s beautiful and dreamlike, and at the same time it’s very scary and claustrophobic. So we had this idea to do a crazy crossover: We already did a haunted-house movie, sort of, with Livid [2011], so why not do it again but underwater?”

While Bustillo cites the memorable underwater-apartment scene in Dario Argento’s Inferno as one inspiration, he notes another film not often mentioned as a trendsetter. “For many years, we have been obsessed with the opening sequence of In Dreams by Neil Jordan, with the divers exploring the flooded village. It’s an incredible set piece, so we tried to capture this feeling with The Deep House, but through the entire movie.”

Indeed, nearly an hour of The Deep House is set below the water’s surface, with the production building that structure in a huge water tank in Belgium. “There’s no CGI in the movie; the house is real,” Bustillo says. “It was the first time Julien and I have shot totally underwater, and directing our stars was a challenge because we were not allowed to dive with them; it was too dangerous. But we had a very good, professional team, with a DP, Jacques Ballard, who is an incredible diver. More than any of our previous films, The Deep House is truly a collective project, a team movie.

“The biggest problem we had was fucking COVID!” he continues. “We lost maybe three days of shooting because of that, and we had to break for three months because we were shooting when our president called for a lockdown and said everyone had to go back home. It was like, ‘What the fuck? We’re filming underwater, we can’t go back home!’ But we had no choice, so that was the biggest problem. The shoot was very intense and difficult, like every shoot, but it was an incredible adventure.”

Kandisha, meanwhile, is set on dry land, specifically a Paris neighborhood where three friends summon an ancient demon that begins killing off their loved ones. That’s a traditional plot, but what sets this film apart is that both the trio of protagonists and the supernatural villain are female. Aisha Kandisha (also Aicha Kandicha) is a vengeful creature of Moroccan legend who preys upon men; Bustillo first heard stories of her while growing up in a Parisian suburb.

“There were a lot of Moroccan people living there,” he recalls. “So I grew up with a lot of Moroccan friends, and whenever I asked them, ‘What is your biggest fear?’ they all said the same thing: ‘Aisha Kandisha.’ And I said, ‘Who is Aisha Kandisha?’ So I’ve been obsessed with this legend since I was young, and one day when Julien and I were looking for subjects for a new movie, I remembered this story, and told Julien it could make a great horror movie. So we brought her from Morocco to France, to a new neighborhood.”

That urban milieu is a change of environment for the duo, whose previous films tended to be set in more rural areas. “What was especially interesting to us was bringing this particular legend into a much more modern universe,” Maury says. “We felt that the buildings and concrete could be interesting to shoot, and really bring something to the story. So we decided to shoot this neighborhood exactly like we would a beautiful landscape. It’s interesting because you have no horizon line, so it’s a good way to show how our protagonists are living, because in this kind of neighborhood, there is no horizon; you don’t usually get out of there.”

Those three heroines—Amélie (Mathilde La Musse), Bintou (Suzy Bemba), and Morjana (Samarcande Saadi)—are introduced as graffiti taggers, an activity traditionally depicted as practiced by young men. It’s the first of a series of gender reversals in what is probably Maury and Bustillo’s most female-centric film since their 2007 debut shocker Inside. “We love women in horror movies in general, both the final girls and female villains,” Bustillo says. “Kandisha is a very specific bogeywoman; she kills only men, and for us it was interesting to have this particular killer. We wanted to make a movie with a different sensibility, and empathy for our characters. That’s why we chose this way of telling the story, because we could have had males in the lead roles. It could have been about three guys who summon Kandisha, and Kandisha tries to kill them. But for us it was more original to have these three girls who are not going to die, and we know that. It’s a different way of telling a horror story, where our protagonists are safe but their brothers, their fathers, their boyfriends are not.”

The casting of the leads was also multicultural, to help ground the film’s grisly occult fantasies. “We wanted to make Kandisha as realistic as we could,” Maury says, “and in this type of neighborhood, there are a lot of mixed cultures, so it was an obvious choice to give these girls different backgrounds. In a way, it brought a relatable context to our story.” 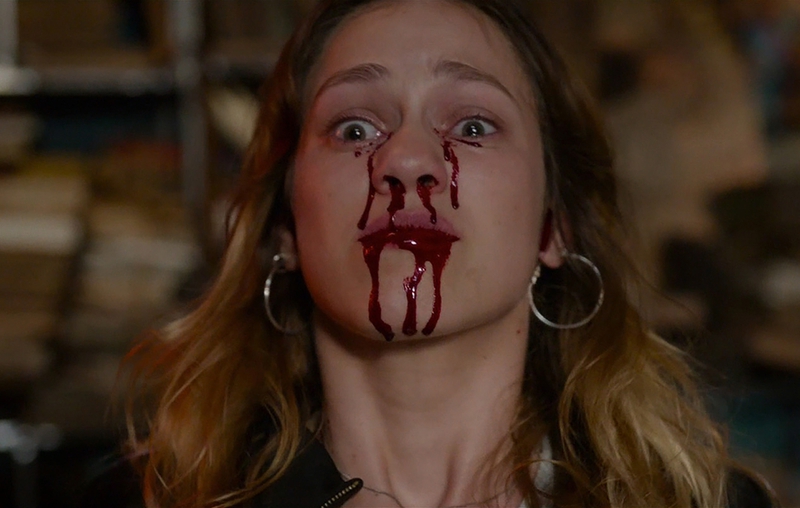 Speaking of multiculturalism, Inside was remade in English five years ago with a Spanish director, Miguel Ángel Vivas (Kidnapped), at the helm. So how do the original creators feel about this reboot? “I was proud at the beginning, when Jaume Balagueró [of the [REC] films] was supposed to direct it, as we’re absolutely huge fans of Jaume,” Bustillo says. “But in the end, he didn’t direct the movie, he only co-wrote it [with Manu Díaz and Vivas]. Personally, I think it’s…pretty good. It’s well-shot, but for us, Inside was an uncompromised film, a very nihilistic movie, and the remake is a little bit more American, with a happy ending.”

“I don’t fucking care,” is how Maury first replies to the question, before adding, “I was just proud that our movie was being remade, because usually it’s classic movies that have remakes, and I was curious to see what direction they would take. I was also much more excited when it was supposed to be Balagueró directing it. But when I saw the movie, I was like, OK, it’s the same sequence exactly as we shot it, the same shots, the same dialogue, and I didn’t see the reason for remaking it. Because the whole point of a remake is bringing a new vision to the story. Here it was the same vision, only softer.”

Bustillo has the last word: “But it’s better than the Martyrs remake!”

The Deep House has reportedly been acquired by Blumhouse with a planned EPIX premiere. You can watch Kandisha currently streaming on Shudder, click below to stream now.