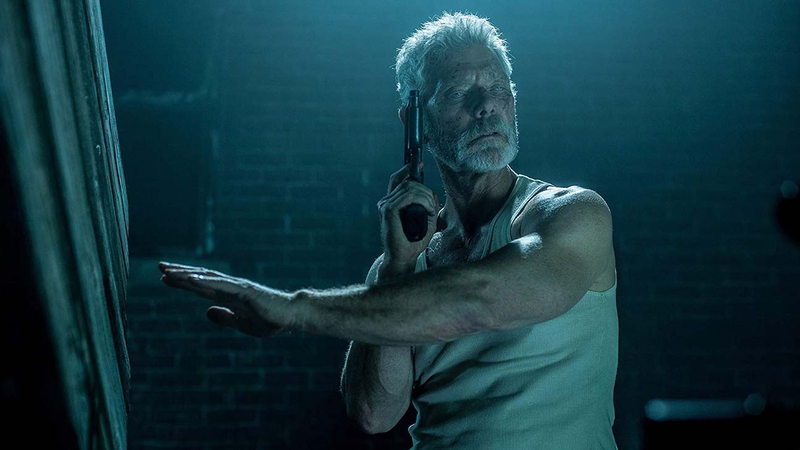 Tread carefully. Watch closely. And whatever you do, don’t breathe. In 2016 Fede Álvarez’s Don’t Breathe introduced Norman Nordstorm aka The Blind Man (Stephen Lang) and took audiences on a horrific, tension-fueled tour of his home. The surprise hit quickly launched discussions of a sequel and cemented Evil Dead (2013) director, Álvarez, as one of the most exciting new voices in horror. Five years later, Álvarez returns to the man in the dark, not as director, but co-writer on a project he sees as a crucial and complicated look into morality and all of its many shades of gray.

Don’t Breathe 2, directed by Álvarez’s creative partner and co-writer on Evil Dead and Don’t Breathe, Rodo Sayagues, picks up years after the first film. The Blind Man, now living in seclusion with his “adopted” daughter Phoenix (Madelyn Grace), seems to have found peace. But his role of playing the good father is suddenly cut short when a group kidnappers set their sights on Phoenix, forcing The Blind Man to violently confront the darkness of his world, and of his own soul. But make no mistake, this isn’t a hero’s journey. Don’t Breathe 2 is a wrestling match of monstrous natures.

FANGORIA talked with Álvarez about his new film, which is only in theaters on August 13th, challenging conservative moral sensibilities, injecting the story with “a bit more madness,” and the unfinished business with Jane Levy’s Rocky.

I’m glad! Thank you! Those were some wild rides [laughs]!

Don’t Breathe 2 has been a long time coming since you first announced it in 2016. At the time, Producer Sam Raimi said it was the greatest idea for a sequel he’s ever heard. What was that central idea that sparked your interest in returning to the story of The Blind Man?

Well, I think at that point [in 2016] it was just an idea. Conceptually, this is what we knew from the first one: there was a guy, The Blind Man who did terrible things, quite heinous crimes, but he was really smart to articulate why he was doing it. He was very good at defending himself and justifying every act. And the story does that for him as well. Every step of the way there’s a reason for him doing what he was doing. And then he gets away with it! Spoiler alert for anyone who hasn’t seen it [laughs]. We felt that if we were going to tell a second part it should be about that. How does that character live with that? Does he sleep at night? Does he feel like he did the right things? Is there guilt or remorse? And is justice going to be made? Will he ever pay for things he’s done? More importantly, is he going to face who he is? Because in the first one he definitely does not. So that’s what we were interested in doing. And to do that you cannot just make him the antagonist again. There has to be more of a protagonistic role. And he’s not really the protagonist, Phoenix is. You don’t spend every minute with [The Blind Man]. He doesn’t share his plans with you. You don’t know exactly what he’s going to do. There’s a lot of mystery around him. It was interesting to tell a story where, hopefully, he comes to terms with who he is. I think the thing he fears the most is himself.

I appreciated the shift in focus in terms of delving into The Blind Man as a deeper character, rather than retreading the steps of the first. But I am curious, as someone who loves your collaborations with Jane Levy, were there ever any discussions about bringing her character, Rocky, back into the mix after she broke out as a fan-favorite in the first film?

It’s interesting. We don’t always know what will make a movie a success in terms of audiences and what they’ll gravitate towards. When we were making Evil Dead we knew there was a massive audience out there that wanted to see it and when we were working on that script we were aware of that. Don’t Breathe was this smaller film and we thought no one was going to watch it because it’s so dark and twisted, and strange. There was Stephen Lang and Jane Levy of course, but there was no massive star power behind it. We made it thinking it was going to be this small release just for people who wanted to see that story. We thought there were going to be a few guys and girls and it turned out that a lot of people showed up! So it’s not until that point where you can really go, ‘we can indulge in this if people want to see more.’ We had so many ideas to start developing this world. So, to your question of Rocky, absolutely. I think there is a part of her story that is not closed. The first film was a bleak ending for everybody, because [Rocky] could’ve given away the money and gone to the authorities and tell people what this guy did and give Cindy’s parents’ closure. But she did not, as far as we know. She took the money and ran and was an accomplice. The money bought silence. That’s the deal she and The Blind Man made. So, I think there’s more to know about how that character goes on. It would be interesting to see that, for sure.

It’s interesting when you get into the morality of these characters. Rocky has good reason to steal the money, so she and her sister can escape an abusive household, but she also allows this other abuser, The Blind Man, to potentially continue his crimes.

There’s a world of Don’t Breathe to work with very shady characters and areas of gray that allow for very original storytelling. Hopefully we’re not prisoners to a universal morality that forces us to tell stories in one single way. Sometimes I wonder if we are or we’re not. But we really try to be Uruguayans, as we are, and allow our culture to translate. And in Uruguay we tell stories from different standpoints. In the first movie the kids were robbers because we understand, at least in Uruguay, that society sometimes puts kids in a place they don’t want to be. They don’t want to be robbers, they can choose better, but they do that because they’re trying to get out of the situation they are in. And still, we like them as protagonists. I remember there was a backlash. ‘How dare they make the protagonists thieves’ [laughs]. Like they’re not humans. They don’t belong. They don’t deserve a story. That’s a very conservative point of view. Maybe that’s an American thing that has a lot of value in it.

I enjoyed what Rodo brought to the table. You guys have been collaborators a long time. Could you talk about your decision not to direct this one and the expertise you lent to Rodo with this being his feature debut?

For me, as a director, I look for the challenge. I mean watching the movie now, wow, there are many things there that I wouldn’t have known how to do. But at the time, directing felt like revisiting a world that I’d done before. I don’t make a lot of movies. I take a lot of time in between movies. I have that luxury because most of the time I want to travel to places and take the audiences with me to places I have never been personally before. So that was the only reason why I felt, at some point, that I wasn’t going to direct it. But I also felt that Rodo could bring a lot more energy and passion to it. And he wanted to direct. So, Sam Raimi and I agreed that he had what it takes. A great director above all things is a great storyteller and he’s one of the best storytellers I know. We’ve been writing together for a long time. The technical part, you have a team for that that will help you. They won’t do it for you, but they will support you. To have a finger on the pulse of the story is the hardest part and [Rodo] is great at that.

What I knew he was going to bring was a little bit more madness. This film is pure madness! In terms of our dynamic as writers, I’m more of the conservative one in terms of how far we’re going to push it. Rodo, I remember on Evil Dead, he came out of the bathroom, and was like, ‘you know I think she should cut her tongue with a blade!” [laughs]. Sometimes when he pitches it goes even further than that and I try to reel him back into R-rated territory instead of NC-17 [laughs]. This one was me telling him to just go crazy, so I think that’s why this one translates a bit more violent and out there on many, many levels because he’s just the wilder side of our creative partnership.

Something I’ve noticed, just in terms of the broader conversations surrounding the horror genre, is that there is a lack of new, long-running horror icons, compared to the 80s and 90s. I think The Blind Man has the potential to become one. Without getting into spoilers of course, do you see a future for the character? Are there other ideas that you guys are thinking of taking this?

Oh, absolutely! We’re really fascinated with character and so is Stephen Lang. It’s so ripe for storytelling. As you see in the movie, the blindness itself could not be there. It’s never mentioned except [in the first one] where they name him. But it’s more about the morality aspect of it. And the name The Blind Man came from him being completely in the dark about who he truly is. He just does not see this side of reality that we all do. The original title of the first one was Man in the Dark. Also, a lot of times there’s a discrimination with blind people in movies where we think of them as always being wise and kind. That is why we had a line in the first movie that said something like ‘just because he’s blind doesn’t mean he’s a fucking saint.’ He’s just so special in many, many ways that he just allows for different stories and that’s what I want as a filmmaker and as a moviegoer. I just want someone to tell me a story I haven’t heard a billion times. You may love the movie less than Evil Dead or the first Don’t Breathe, but at least we can agree that you have never heard this tale before. You know what I mean?

That’s a big thing. There’s a lot of great movies out there, but the tale itself you’ve heard a billion times. Good guy versus bad guy and then bad guy dies and good guy wins. This tale, Don’t Breathe 2, you have not heard and I think there’s value in it. There’s self-redemption. It’s not about who redeems you but coming to terms with who you are. It’s also a story of compassion. How should we feel about people when they’ve done the most heinous crimes? Should we show them less compassion? Should we spit on their graves? There’s a lot of great stories there. So that’s why I think this character has that chance to return.