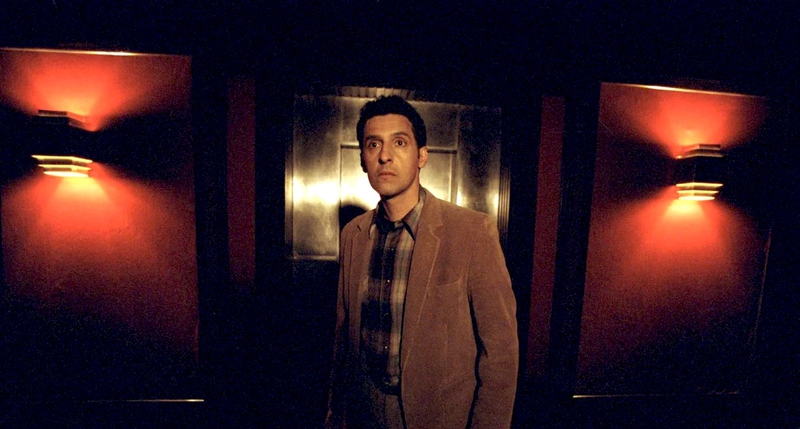 Editor's Note: This was originally published for FANGORIA on January 27, 2005 and we're proud to share it as part of The Gingold Files.

Fear X isn’t the only recent thriller to find a European director cracking the international market with an English-language film, but unlike Alone in the Dark’s Uwe Boll or Assault on Precinct 13’s Jean-François Richet, director/co-writer Nicholas Winding Refn doesn’t try to do so by imitating American action hacks. Rather than resort to incoherent Cuisinart editing, Refn maintains a deliberate, brooding pace that’s more, well…European. It might not be the quickest way to Hollywood, but it has a lot more integrity and is infinitely more satisfying to watch.

Despite its title, the focal emotion of the film (which Refn co-wrote with the noted late author Hubert Selby Jr.) is not terror but obsession. John Turturro plays Harry Caine, a security guard at a Wisconsin shopping mall who has never recovered from the shooting death of his wife Claire in the building’s parking garage. The police have no leads, and in between visions in which Claire (Jacqueline Ramel) continues to appear to him, tantalizingly out of reach, Harry obsessively studies mall security videotapes, hoping to catch a glimpse of the murderous deed and the person who perpetrated it. Refn, feeding us details of the incident only gradually, gets us wrapped up in the mystery too—we want to tease out a definitive image from those grainy tapes as much as Harry.

As Harry’s mental state unravels and he eventually stumbles upon a random, discarded photograph that he believes is a key piece of evidence, we’re also introduced to Lt. Peter Northrup (James Remar), a Montana cop who has just received an award for his police work. He’s clearly troubled by something too, but what is it? And what does it have to do with Harry’s plight? Refn drops hints and revelations slowly—and then does something unexpected and unconventional. Like Alfred Hitchcock with Vertigo, he reveals the solution to the central mystery well before the story’s climax, intending for this information to deepen our understanding of the two protagonists in what turns out to be a dark character study. Both Harry and Peter are haunted by an act of violence, and the suspense ultimately derives not from waiting to find out the details, but in observing how both men react—solely and to each other—once they have that knowledge.

It’s a risky gambit, and neither the story (and its backstory) or emotions are especially complex; as a narrative, Fear X doesn’t really amount to much. But Refn’s skill at creating a stark, eerie mood and plumbing the recesses of his characters’ psyches is strong enough to keep you intrigued throughout. There’s quite a bit here that recalls David Lynch and—when Turturro checks into a hotel whose decorator was clearly enamored of deep red—the Coen brothers’ Barton Fink, but Refn isn’t merely creating a pastiche of previous semi-surrealists. He doles out abstract images sparingly while carefully tying the tone to Harry’s tormented mental state, and Turturro responds with another of his fully inhabited performances. He’s convincingly haunted but never so withdrawn that he pushes the audience away, and even as you sympathize with him, you can easily believe he’s not all right upstairs. Indeed, Refn suggests as the film goes on that his point of view can’t be trusted, and that not everything he—and we—learn as his odyssey continues may actually be the truth.

Fear X was filmed in Canada and Copenhagen, and yet its vision of a barren rural America is utterly convincing and evocative. Major credit for this goes to cinematographer Larry J. Smith, who has worked on three Stanley Kubrick features and here drains the vibrancy from the movie’s colors without going for the monochromatic mise en scène seen in too many thrillers lately. The score by Brian Eno and J. Peter Schwalm adds an extra undercurrent of dread to a film that’s not a horror story on the surface, but creates a sense of unease by enveloping us in its protagonist’s paranoid state of mind.