RAD CHAD creator Aaron B. Koontz joins us for a peek at the inspiration behind the art. 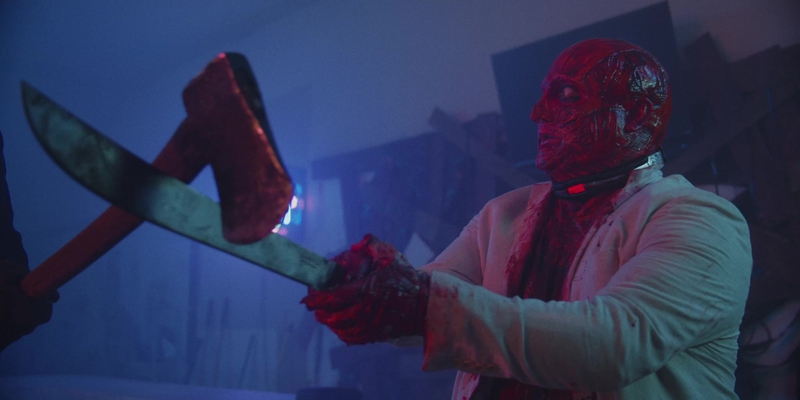 Scare Package II is on its way to our hungry little eyeballs, and we're serving up an amuse-bouche for you to feast upon while we wait. Producer/writer/director Aaron B. Koontz is sharing a brand new poster with us and it is giving us all the "walking through the horror aisles at the video store as a kid, wondering what forbidden fruits lay behind the epic key art," vibes. Koontz stopped by to chat with us about the new poster art and recapturing the essence of the original, but different. 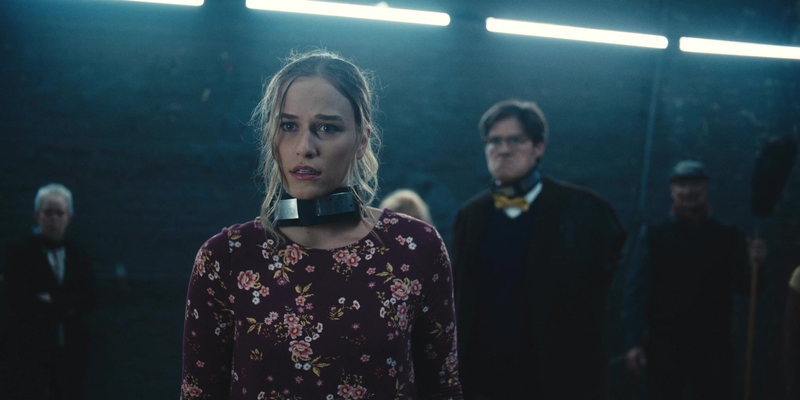 "As some may recall, the original title for Scare Package was Tropes', as it all was about subverting and embracing the horror tropes we know and love. But we wanted the title to also be a trope, so we changed it to poke fun at all the '80s horror puns (à la Chopping Mall, Christmas Evil) and it became Scare Package. But then the poster itself had to do the same, in one image. So when I first met with our artist Marc Schoenbach of Sadist Designs, we asked for something that felt reminiscent but also commented on those designs at the same time. Our poster within a poster, inside an '80s VHS HOUSE style aesthetic, nailed this. But he nailed it so damn well, that the bar was set, and now we had a challenge to meet that again," says Koontz. Behold, Exhibit A — Schoenbach's design for the original Scare Package. 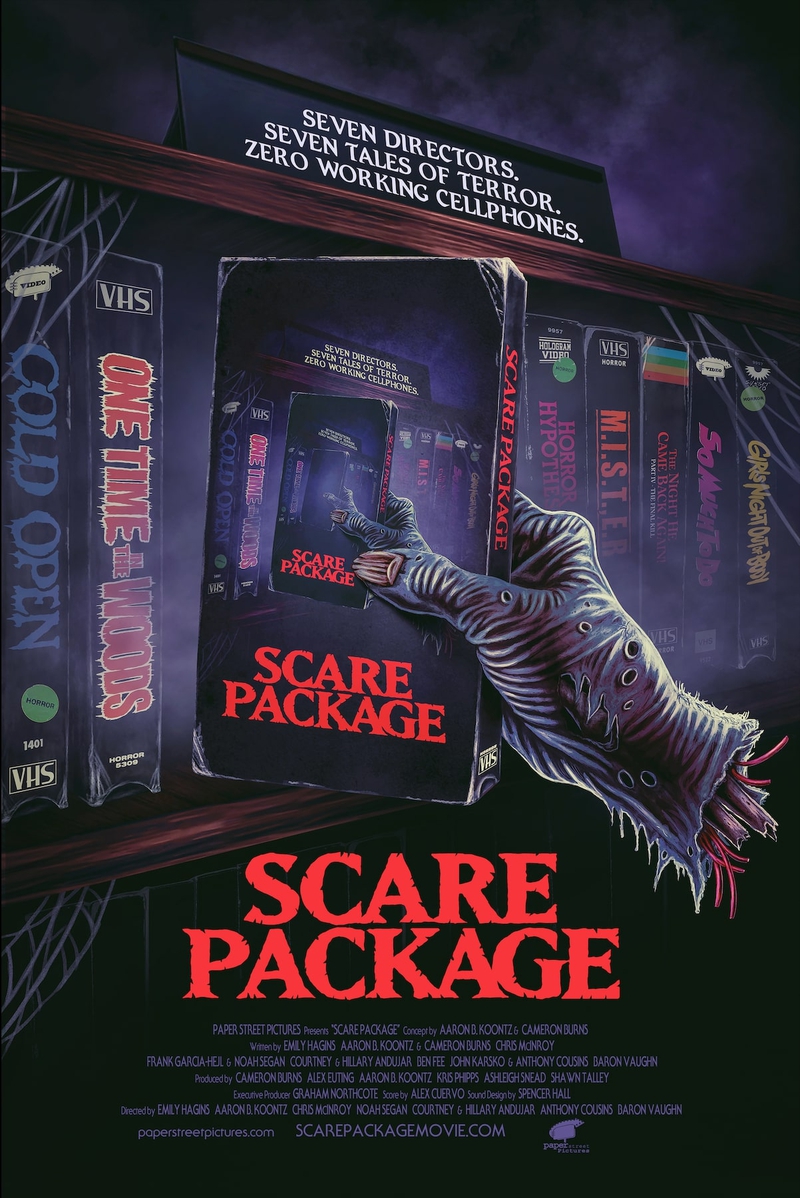 So how exactly do you go about describing "same vibe but different?" Koontz and Schoenbach reunited for the sequel's key art, ready to tackle this precise problem, "When I came back to Marc to discuss Scare Package II, I had a few directives: it had to build off the first one but now within a '90s and early 2000s vibe, while again being fun and light-hearted. It's important to me that the vibe of these films also come out here. Because in many ways, Scare Package is a comedy first, even if that comedy must come from horror films."

Working in the horror with a bit of a wink and a nod to the comedy elements of the film, like the severed hand giving a peace sign, helps to blend the overall tone of the world into the poster, "We had a few designs and ideas but then I gave him the note of the hand now being a peace sign, and also a two for our sequel, coming out of a tube tv (which is featured prominently in the film) and then he had it. We threw in a ton of fun easter eggs, updated the color palette, and now we have something that I think compliments the first design while also showing something truly new and unique, with some hidden jokes within. And after you watch the film, you'll see what I mean!"

And now, without further ado... may we present the stellar key art for Scare Package II (severed hands do an enthusiastic drumroll). 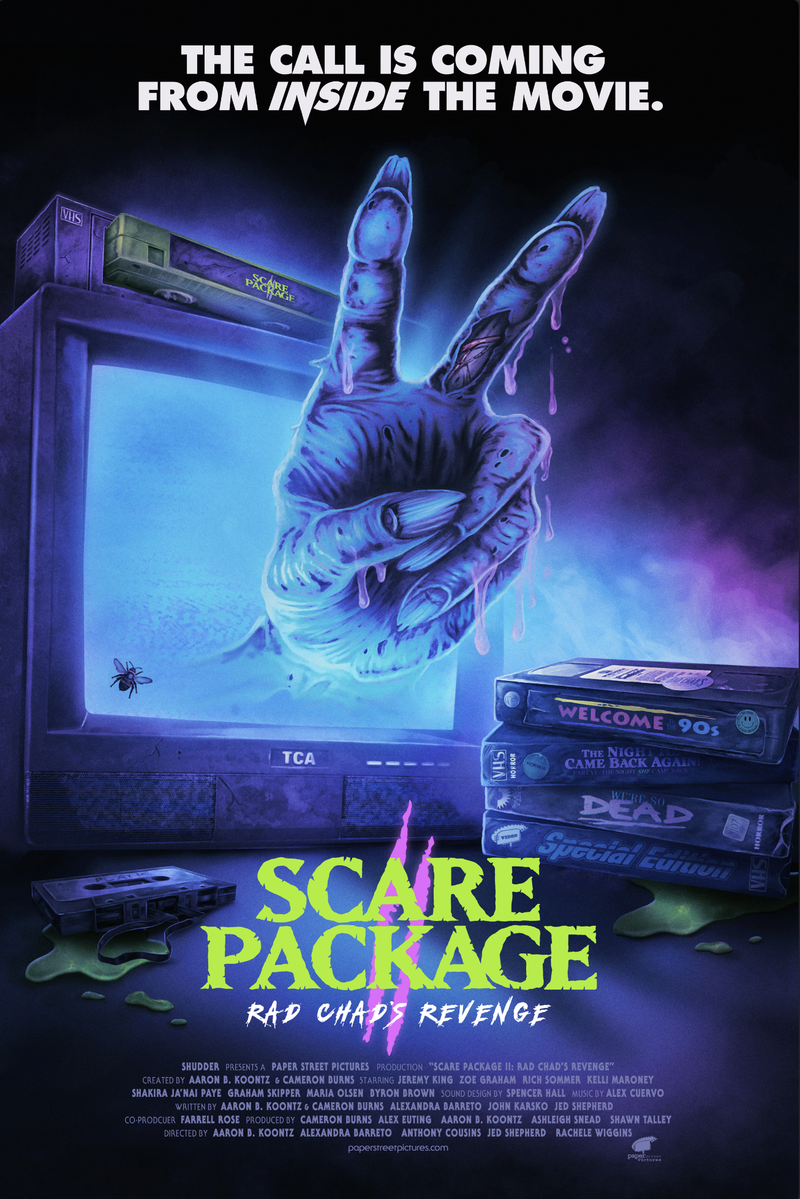 The meta-horror-comedy immediately follows the events of the first installment, when Rad Chad's funeral "turns into an elaborate series of hilarious death traps, the guests must band together and use the rules of horror to survive the bloody game."

You can catch Scare Package II debuting August 25th in London for FRIGHT FEST! More festival screenings will be announced, but the cast and crew will be on hand in London for the World Premiere, so catch it if you can! Speaking of on hand, Koontz says they'll also have some of these sweet posters on hand to sign and give away to attendees.