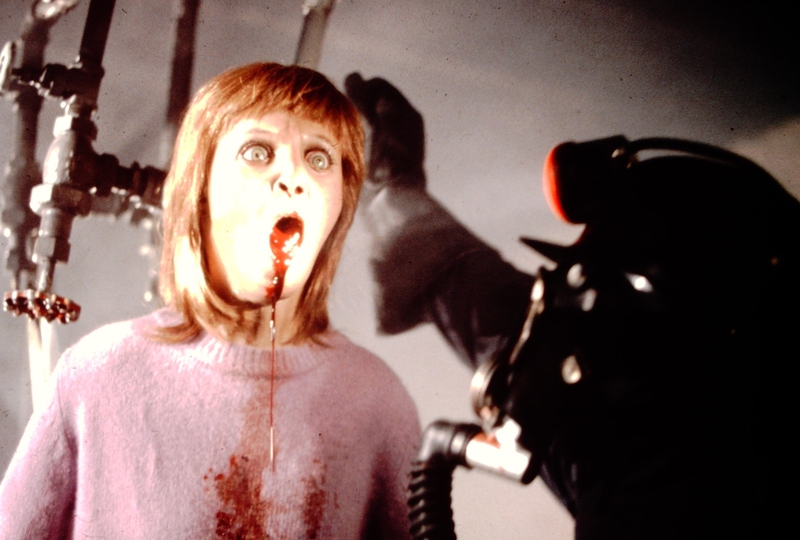 Editor's Note: This was originally published for FANGORIA on January 25, 2009, and we're proud to share it as part of The Gingold Files.

Valentine’s Day is February 14, but this year, fans of George Mihalka’s holiday slasher favorite My Bloody Valentine got a couple of early gifts. Not only did Lionsgate’s remake prove relatively faithful to the spirit and storyline of the original while adding the fun of 3D, but the company gave the 1981 Canadian chiller its long-awaited DVD release in uncut form, with numerous moments of MPAA-scissored gore reinstated.

This disc has delighted fans who’ve had to make do for over 25 years with VHS and disc editions from original distributor Paramount containing the R-rated cut. And no one could be happier with its release than director Mihalka himself, who has long bemoaned the butchering of Valentine, and had been told a restoration would be impossible. “I was asked whether I wanted to do a director’s cut a few years ago,” he reveals. “Of course I said yes, and then I was informed that all the outtakes and discarded or censored scenes were lost—that no one could find them in the storage vaults.”

As it eventually turned out, “John Dunning, one of the producers, had a good portion of the lost footage in his safe, and he was going to use it in a sequel that was never made,” reports Mihalka, who appears along with Dunning, fellow producer Andre Link and other Valentine folks in the DVD’s supplements. Once Lionsgate acquired the rights from Paramount to reissue the movie on disc, presumably as part of the deal for the theatrical remake (Mihalka says he wasn’t privy to those discussions), “I got a phone call last fall from Lionsgate letting me know that a restored version was in the works, and that they would appreciate my input.”

Any number of films from the same period underwent trims based on the mandates of the ratings board, which took a much harder line on screen violence in the ’80s than it does now. But My Bloody Valentine has always been a particular cause célèbre among genre fans, and Mihalka notes, “For over 20 years now, I have never stopped hearing from fans about a restored version, or questions about what was missing. I’ve had letters from Japan, Germany, Finland and every state in the U.S. asking about that, and in every magazine dedicated to the genre. It started in the late ’80s and it got quite intense by the late ’90s,” when the DVD explosion allowed a new venue for uncut movies to see the light of day.

The director has his own ideas about why Valentine attracted such a rabid following anxious to see it unexpurgated: “I believe the film speaks to people who like their films to have a little more depth of characterization, subplots and atmosphere. Let’s not forget that the film is not about Ken-and-Barbie suburban babes and hunks; it’s about the human condition, working-class hardships, friendships and betrayals, love triangles, the revenge of the workers against the bosses, the loss of jobs and the bleak future of the young American working class—and of course some of the most original and unexpected scenes of horror and violence. The fans have developed personal connections with the characters that have kept the film alive and vibrant over the years. And of course My Bloody Valentine was and is very subtly subversive, and the fact alone that it was censored has united the fans in their desire to see a restored version. I am very happy that there is now a very cool new edition available to them.”

Even with all the missing moments back in their proper places, Mihalka reveals that there are even more bits that were excised from the film and can never be salvaged. “The footage that John Dunning kept in his safe was certainly not difficult to recover,” he says, “but unfortunately other unseen material has been lost or deteriorated past usability. A few scenes were removed or shortened for overall length reasons—you know, the ‘enough of the character development, let’s get to the kills’ school of thought. I could always argue that seeing those parts now, I too might agree they were unnecessary, but we’ll never know, because they’re gone forever. There’s one murder that was completely cut out and has unfortunately disappeared, where Harriet and Tom are necking, one lying on top of the other, and the miner impales them both with a giant drill bit. We now only see the aftermath, when Hollis discovers them before he gets the nail gun to the head.”

That said, “I am very happy with the new version of the shower scene, even though there will always be a few missing frames of the ‘human showerhead.’ That’s the result of the death by a thousand cuts we were forced to endure; the last few seconds were literally snipped down one or two frames at a time, and those single frames have of course either disintegrated or just plain got lost. I also really like the new ‘Happy gets it under the chin’ and Mabel in the dryer. And finally, the macabre humor of the ‘death by hot dogs’ can be appreciated as we intended. Those are my four favorites, in that order.”

Since Valentine, Mihalka has kept busy in Canadian features and TV (he directed Ginger Snaps star Emily Perkins in four episodes of the popular crime drama Da Vinci’s Inquest), but hasn’t really dabbled in the genre since the early-’90s suspense chillers Psychic and Relative Fear. With the new attention granted his first venture into screen terror, however, he’s hoping that will change soon. “The incredible response from the fans to the restored version and the remake has certainly given me a new desire to make another horror film,” he says. “I am very interested if the right project comes along.”

And of course, he’s looking forward to checking out the 21st-century reinterpretation of Valentine—with no hard feelings about the fact that he and his collaborators back in ’81 faced far more stringent ratings standards than their 2009 counterparts. “I’m preparing a new film and have been traveling across the country scouting for locations and casting, so I haven’t had a chance to see the remake yet,” he says. “I did see the trailer and think it is very cool, and I intend to go to my local theater soon to check it out. I understand that it has been doing extremely well at the box office, and as far as I’m concerned, I hope it continues to do great business. I was quite honored when I found out that a remake was being done; what better compliment to the original?

“As far as the MPAA is concerned, it’s water under the bridge,” he continues. “It was a different time with different sensibilities. We were very audacious, our special effects were state-of-the-art and pushed the envelope and we were unfortunately censored, but that’s life. I do wonder how successful the original could have been without the unreasonably strong reaction and punishment we received from the MPAA at the time. All I can say is that we were the sacrificial lamb, and that the reactions from fans and filmmakers alike to the treatment we received has allowed those who came after us much more freedom. I would like to extend my best wishes to all those fans, and a huge thanks to them for keeping the spirit of the original My Bloody Valentine alive all these years.”