EVIL DEAD: THE GAME Puts The Boomstick In Your Hands

How EVIL DEAD: THE GAME channels the franchise's unique blend of dark comedy and horror like no video game has before. 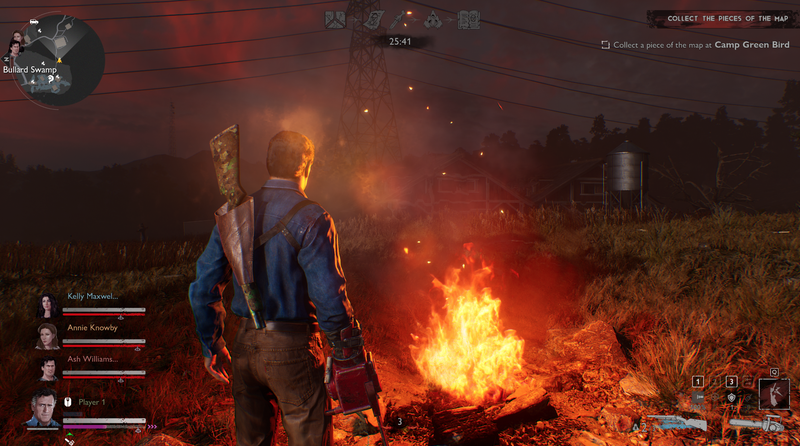 Attempts to translate Evil Dead into a video game have been made in the past to mixed results. In the wake of the Showtime series (and in anticipation of the upcoming Evil Dead Rises film), it was inevitable that someone would try and capture the franchise's unique blend of horror and dark comedy and gamify it. Previously, we've seen hack-and-slashes, survival horror, tower defense, and even pinball, but 2022's Evil Dead: The Game is the first time we've seen Ash level his boomstick at a multiplayer-centric title.

Evil Dead: The Game is an asymmetric multiplayer game that pits four humans against a single player controlling a powerful Kandarian Demon. I had a chance to play through a couple of game rounds with the developers and get down and dirty with some Deadites, and despite being skeptical, I had one hell of a groovy time. 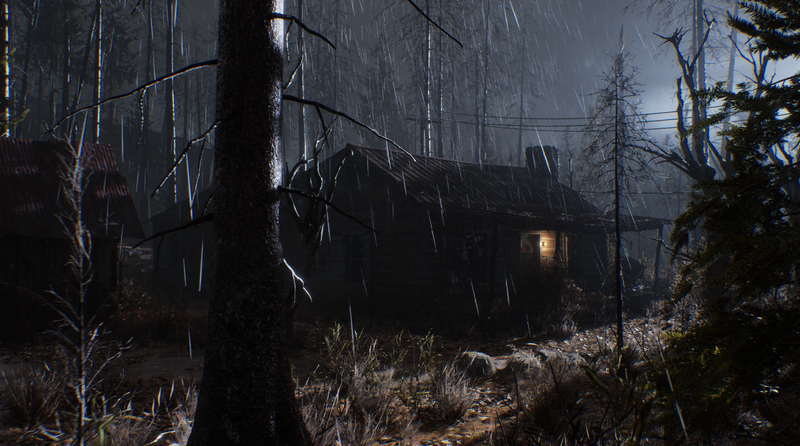 But I wasn't always anxiously anticipating my time as Ash. Upon hearing the game's initial pitch, my eyes rolled so hard into the back of my head that they almost got stuck there. After all, when you think about asymmetrical multiplayer horror games, Dead by Daylight immediately comes to mind. I'm absolutely cheering for people who love that game, I'm just not one of them. I wasn't looking forward to being hoisted onto hooks and enduring abuse by trees while desperately trying to crank some generators. "Asymmetric" multiplayer is usually code for one side being dramatically more fun to play than the other, and I'm pleased to report that's not the case here. 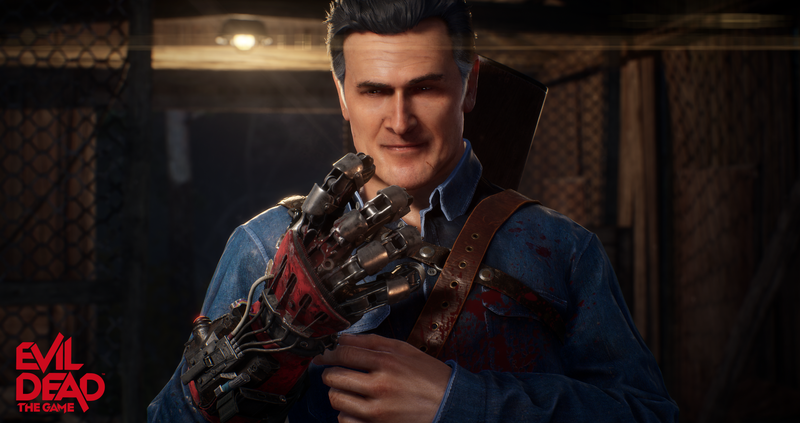 No, much like the massive departure from The Evil Dead to Evil Dead II, the similarities begin and end with the fact that both this licensed game and Dead by Daylight feature massively popular horror franchises. Here, you can arm yourself and fight off the enemies who desperately want to hack you to bits. You're not forced to creepy crawl meekly, begging for a player to come and revive you, only for a horror icon to come dragging you back to the meat hook.

In fact, there's plenty of firepower to be had here. Human players can equip themselves with a short-range (swords, axes, etc.) and a long-range weapon (pistols, shotguns, boomsticks, crossbows) to aid them in their fight against the Deadite hordes. It's quite the power trip to see a well-honed team slice and shoot their way through enemies, especially since you can pull executions on enemies with low health for a sweet display of martial prowess (and even sweeter I-frames). 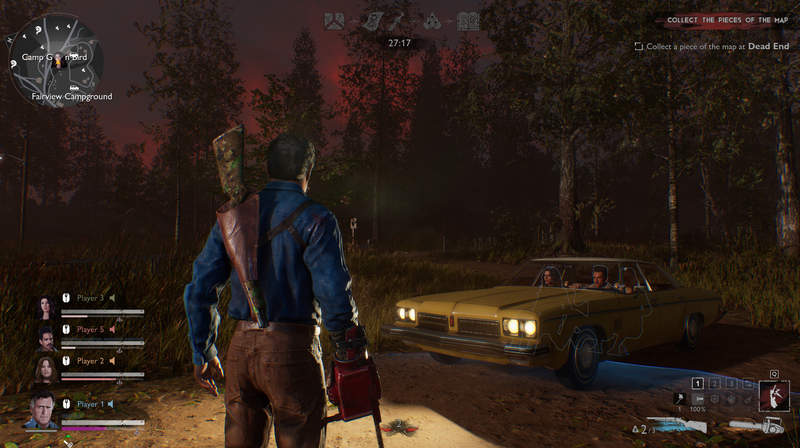 To balance their relatively powerful arsenal, humans are relatively slow (though they can commandeer cars to go faster with the caveat that they instantly become visible to the demon player), and they have a lot of ground to cover. Like in other Evil Dead works, the humans' main objective is to seal the breach between worlds. To do this, they have to acquire the Necronomicon and the Kandarian Dagger before finally assaulting the portal itself.

The humans don't have to be content with their starting strength either. Survivors can level up things like their melee weapon damage by gathering Pink-F (named for the drink from Ash vs. Evil Dead). Weapons also come in multiple versions. Each character starts with a unique basic weapon, but like Fortnite and Apex Legends, you can find higher-tier weapons with better stats littered throughout the level. 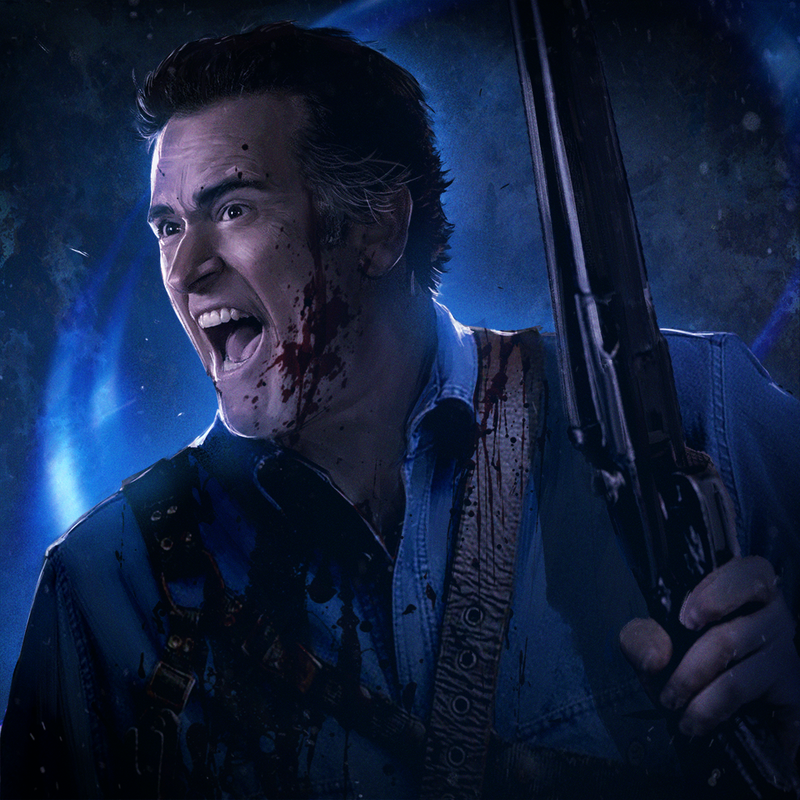 Which character you pick is also important, beyond how cool they look. The game launches with thirteen human characters (including four different versions of Ash!) split into four types. Leader characters have auras that improve the stats of other survivors, Warriors have more health and deal more melee damage, Hunters inflict more ranged weapon damage and can carry more ammo, and Support can help do things like heal and create shields. 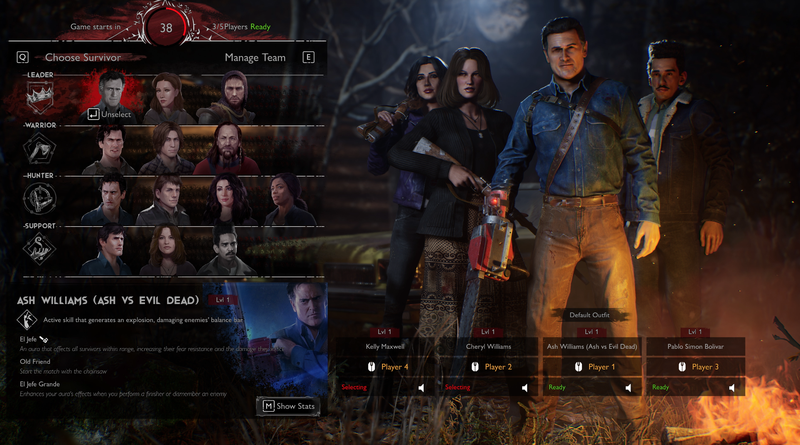 Getting even more granular, every character also has a skill tree that can level up to achieve permanent buffs. Unfortunately, I didn't have the opportunity to examine that system too thoroughly. Still, from what I did see, these skills seem to center around a character's type. So expect Hunters to get upgrades focusing around ranged weapons and so on. 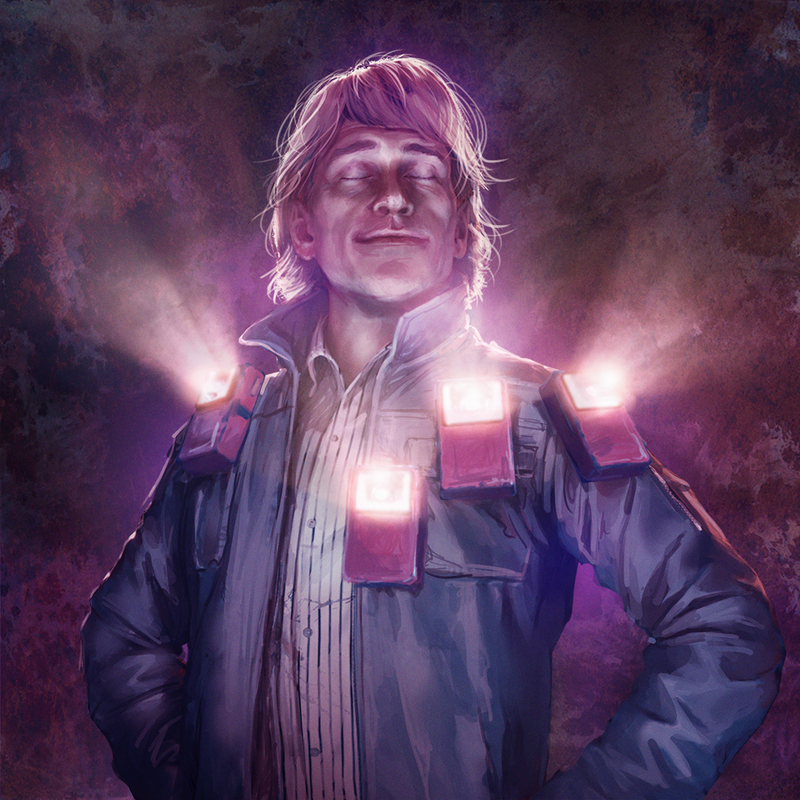 Of course, the humans are just half of the gameplay equation that makes up Evil Dead: The Game. While playing as the survivors is more like a traditional third-person action game, the Kandarian Demon feels like a mixture of a MOBA (multiplayer online battle arena) and Dungeon Keeper. 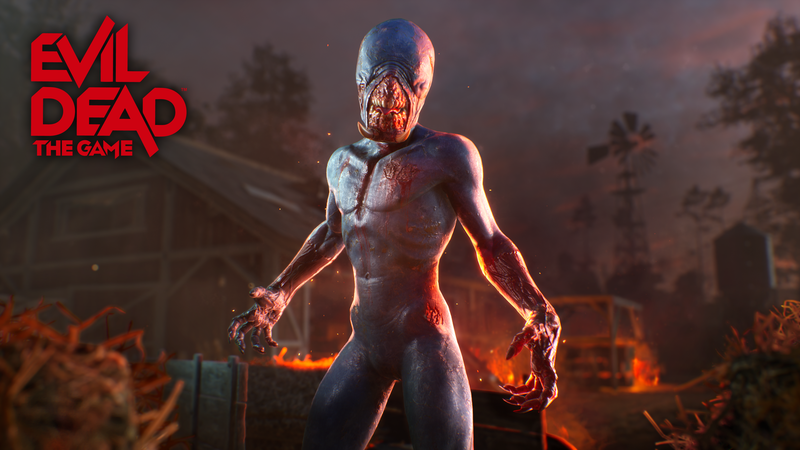 The demonic player starts the match as a disembodied presence (which is a very Evil Dead concept). When you first spawn, you're weak as a kitten, and you have to acquire demonic energy by absorbing it from orbs throughout the map. Acquiring this energy lets you do things like set traps or buff the Deadites in the area. It also lets you level up (just as Pink-F does with humans) and gain the ability to spawn demons or manifest your powerful form into the world. 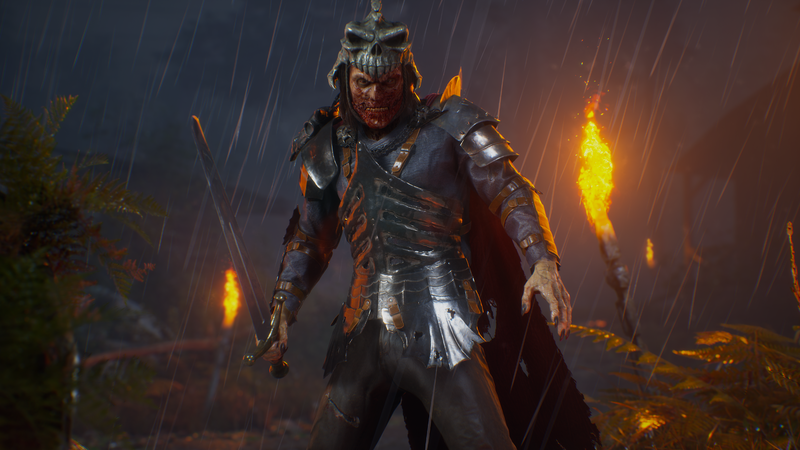 Demons come in three archetypes: Warlords, Puppeteers, and Necromancers. Each of them has a particular strength, like being better able to possess survivors, which depends on a mechanic that links demons and humans in the game: fear.

One of the unique aspects of Evil Dead: The Game is that survivors have a fear meter which increases when they've split apart from the group, in a dark place, or when they run into a trap set by the demon player. If a player's meter fills completely, they're susceptible to possession. When a player is possessed, the demon player has complete control over them, which can be absolutely devastating for the survivors if it happens at a critical moment. 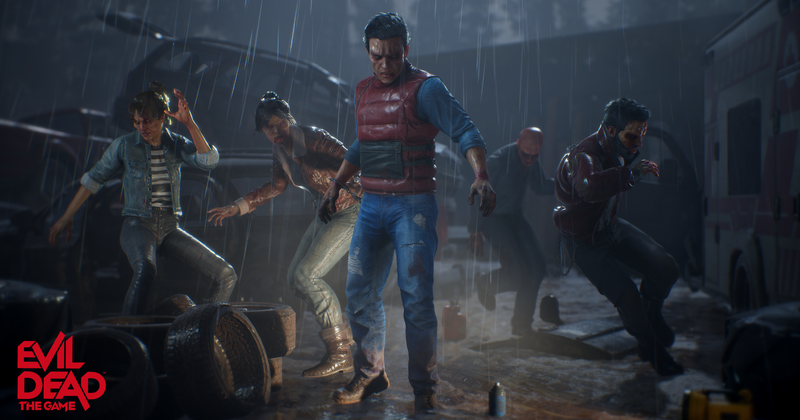 The most important thing about the Fear mechanic is that it forces cooperation. Anyone who splits off on their own will quickly find themselves possessed, and their teammates will be forced to kill them. This is a genius solution to an issue plaguing almost every team-based multiplayer game. In essence, good, bad, you're the guy with the gun (or demonic presence). And if you don't want to die, you better know what to do with them before Fear takes you over. 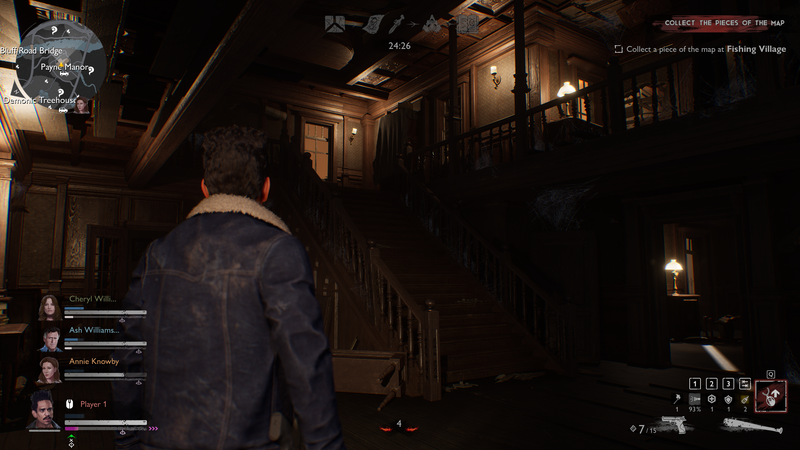 The two matches of Evil Dead: The Game I played weren't nearly enough to get fully acquainted with the game, but my initial impressions were more than positive. The demon player may have a bit of an advantage, especially if the survivors split into two groups to tackle multiple objectives. If the demon fortifies an objective area with traps, then there's a good chance they can fill one of the survivor's fear meters, buff the Deadites in the area to tie up the humans, possess one, kill the other, then at the end of the possession use a strong demon to take out the remaining human. By the time the remaining survivors make it to the other objective, the demon can have reset the traps and be prepared to do the same thing a second time. However, a team that sticks together should be able to watch each other's backs enough to prevent a total wipe.

I'm excited to play more Evil Dead: The Game, and I'm impressed that at $40, it's a "budget title." There's a lot of depth there, and it'll be interesting to see how it works as a live service game. The verdict? Hail to the king, baby.

Evil Dead: The Game will be available May 13th but you can pre-order it now.