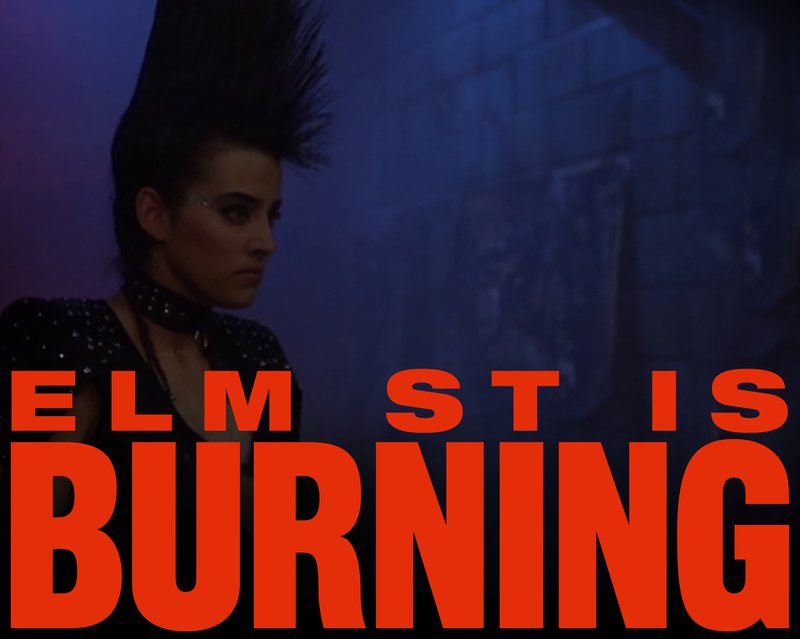 Jennifer Rubin as Taryn in A NIGHTMARE ON ELM STREET 3: DREAM WARRIORS.

Freddy’s Revenge may be the gayest Nightmare, but Dream Warriors is where Elm Street’s true queer legacy resides. Freddy’s Revenge is less Queer Horror than it is a straight man’s idea of a gay Nightmare. Homoerotic, yes, but also homophobic, exploitational and tone-deaf. It utilizes the type of gags commonly played for laughs in the “Blue Oyster Bars” of ‘80s franchise comedies. This time, however, those gags are played for jeers.

“It was intended to play homophobic rather than homoerotic,” said David Chaskin. YAY! Thank goodness for that. The Freddy’s Revenge screenwriter asked himself what would be truly terrifying for their core audience of adolescent men. Turns out, being queer is right up there. This is the “gay panic” subgenre of Queer Horror. It’s the “I Saw Daddy on Daddy Action and it Made Me Question My Gender and Kill People” genre. Queerness makes me kill is the gist.

Jesse kills because he’s queer? Freddy is Jesse’s not-so-latent murderous homosexuality, yes? Which totally tracks for me. Freddy already spits ghoulish Drag Race burns like no other queen, and like the best of them, seems to have a really good time freaking everybody out.

“Gay Panic” personified, Freddy is literally Jesse’s nocturnal emission. Freddy rises from Jesse’s subconscious when he sleeps, then murders – with Jesse’s hand inside the four phallic fingers of Freddy’s glove – the objects of Jesse’s attraction, bff Grady and Coach Schneider. Yes, Coach Schneider. I can tell you from experience, a common gay male teenage fantasy is after-hours sexy time in the boys locker room with Coach. GET OUT OF MY HEAD, FREDDY’S REVENGE.

Director Jack Sholder was unaware of the queer thematics of Chaskin’s script? “Clearly the gay S&M bar, and the ass-whipping and all of the other stuff, and some of the lines that people have picked up on, like, ‘He’s inside me,’” Sholder said. “Why I didn’t get it, I don’t know. Just because it never occurred to me. I honestly never got to that level of subtext with it.”

Imagine being that heterosexual.

Ain’t nothing sub about that text, gurl. Not even Coach Schneider’s strawberry whipped ass. Freddy Krueger himself, Robert Englund, described the story as “Beauty and the Beast.”

Freddy’s Revenge intricately layers its homophobia in a thematic and explicit tiramisu. That dessert was on many menus. This is 1985. A contagious cancer is killing gay men. The world was experiencing a renewed taste for smear the queer antics in its storytelling. Coach Schneider is just another predatory gay man who gets what’s coming to him. Balls slapping him in the face.

Chaskin said in the 2019 documentary Scream, Queen! My Nightmare on Elm Street, “I never wrote ‘he screams like a woman.’” While we’re on the subject of “nevers,” I never characterized Freddy’s Revenge star Mark Patton’s infamous shower scene scream as masc or fem. Honestly, it just seemed like a reasonable response to unconsciously murdering someone. I didn’t read it as gendered behavior. It was a great scream. I was impressed.

Mark Patton is impressive throughout Freddy’s Revenge. It is a truly great performance. Chaskin may have created a gay caricature, albeit a thoughtfully crafted one – even if those thoughts were homophobic. But Mark Patton presented a living, feeling, emoting (and screaming) final gurl. Nightmare on Elm Street 2 is a wild, ridiculous ride. Mark Patton’s authenticity is the safety bar strapped across our laps, holding us to our seats. I almost forgive him for killing people in a homosexual panic. Maybe that’s what homosexual panics are for?

I’m down with murderous queers… when they commit to their queerness. It’s when they roll back to a Kinsey One that my empathy wanes. That’s what cost Freddy’s Revenge its float in the Pride Parade. Nowhere is the homophobic intention of Chaskin’s script more evident than when Jesse’s heteronormativity is saved by the love of a good woman. Yawn. Jesse’s hetero love interest gets just the tip of Freddy’s tongue. Same sex gents receive full penetration.

Where Freddy’s Revenge concerns itself with Queer shame and the dark, lonely despair of homosexuality, Dream Warriors is about Queer pride and the power of chosen family. Freddy Krueger is no longer the lurking specter of guilty homosexual erections. He is back to getting even with the Elm Street parents who set his hair on fire, along with the rest of him.

Original Nightmare final girl Nancy Thompson returns with her skunk stripe playing Auntie Mame to the last of the sleep-deprived Elm Street children. These troubled teens have been abandoned by their parents and institutionalized. They struggle with rage, self-harm, drug addiction and suicide. All issues that disproportionately affect queer youth. Even their treatment and its disregard for the truth of their experience smacks of conversion therapy.

Their dreams are misdiagnosed as “Byproducts of guilt. Psychological scars stemming from moral conflicts and overt sexuality.” One teen laments, “Great. Now it’s my dick killing me.”

No, Kincaid. That was the last movie.

On behalf of all queers, we are claiming them. They’re ours. No, no, that wasn’t a question.

Nancy arrives in the nick to teach the troubled teens (some more successfully than others) that Freddy Krueger isn’t the only one who can be powerful in their dreams. Anchors aweigh. The Dream Warriors’ Pride Float has launched. Nancy’s message to the troubled T’s is you are not alone, you are not powerless, you found your drag family, and together you will find strength in that which once made you vulnerable. Welcome to the House of Nancy.

I’m not mad at you, Freddy’s Revenge. I even like you. There were times I loved you. Dream Warriors is where my little queer heart lives now. But you’re not just a Nightmare I used to know. I cherish many fond memories of you, including my father watching in disgust the “You’ve got the body, I got the brains” scalp-peeling clip on some entertainment news show.

“Jesus Christ,” he proclaimed, totally revulsed. “What kind of a sick mind watches this crap?”