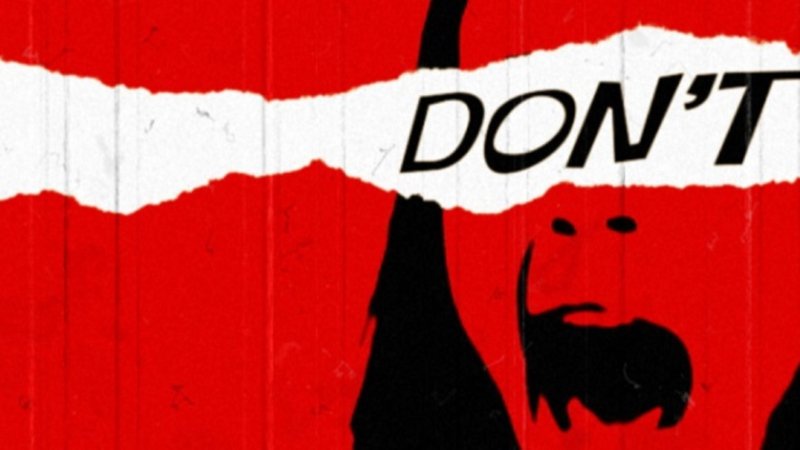 Editor's Note: This was originally published for FANGORIA on April 12, 2007, and we're proud to share it as part of The Gingold Files.

While promoting their hilarious and sporadically splatterific cop comedy Hot Fuzz, writer/director Edgar Wright and writer/star Simon Pegg chatted with Fango about Don’t, their equally funny faux trailer in Grindhouse that Wright directed and in which Pegg appears—very, very quickly. “I was in makeup for three hours and I went on set for 10 minutes, and that was it,” Pegg laughs of the experience. Indeed, Don’t is a note-perfect recreation of the coming-attractions spots used to promote ’70s/’80s British and European horror films, in which the desire to camouflage the casts’ foreign accents resulted in barrages of brief images, with no dialogue spoken. “You look at the differences between Suspiria’s Italian trailer and the American one,” Wright explains, “and that was what I wanted to get across in Don’t.

“Quentin Tarantino and Robert Rodriguez were big supporters of Shaun of the Dead,” he continues, “and when they first started prepping Grindhouse, they asked me to do one [of the fake previews], which was great.” Citing the trailer for Don’t Open the Window (the American moniker of the Jorge Grau zombie movie better known now as Let Sleeping Corpses Lie and The Living Dead at Manchester Morgue) as a particular influence, along with the cinema of Mario Bava, Dario Argento et al., Wright reveals that the fast-cut format allowed him to stock Don’t with familiar faces from his and other contemporary features. He tells Fango that the actors include “Nick Frost, Stuart Wilson, Lucy Punch, Rafe Spall and Kevin and Nick Wilson as the twins; they were also the zombie twins in Shaun of the Dead. There were also some new people I’d never worked with before like Jason Isaacs, Matthew Macfadyen, MyAnna Buring from The Descent, Emily Booth—they go by so fast. I had an absolute blast doing it; it was really good fun.”

Filmed in two and a half days in two separate British mansions, Don’t has been cited as a hilarious highlight of the double-feature presentation, and many have speculated about the possibility of expanding this and the other bogus trailers into full-fledged features. Wright’s keen on the idea: “The Fango readers have to get out there and keeping going to see Grindhouse so it makes enough money for them to make a sequel,” he says. “Then Eli Roth and I will happily do a double bill of Thanksgiving [the Hostel director’s holiday slasher homage] and Don’t. You have my word on that. But that’s up to the readers to make it a hit.”

As has been much-discussed in the blogosphere this week, that hasn’t happened yet, but Wright believes that too much attention has been paid to Grindhouse’s bottom line. “I hate that mentality of crying hit or flop within two days,” he says. “If you think of the number of films that are considered classics that were box-office disappointments… Does anybody talk about John Carpenter’s The Thing and say, ‘Oh, that box-office flop The Thing’? No, they say, ‘The John Carpenter classic’; a lot of people think it’s his best film. It’s bullshit, and the fact of the matter is that what Quentin and Robert have done, whether intentionally or not, is created the ultimate cult film. They made a three-hour midnight movie that was R-rated and released on Easter. And the thing about that is that not only aren’t there as many showings, but it’s also a film that has to be seen in the evenings. You wouldn’t want to see Grindhouse at 11 in the morning; you have to see it at night.”

Pegg agrees: “It’s kind of annoying, the negativity that has come out of the opening weekend,” he says. “This film will be around forever, the same way that movies like The Shawshank Redemption and This Is Spinal Tap might not have had a big splash at the start. I personally absolutely loved Grindhouse, and felt that Robert and Quentin’s sections were equally outstanding. I’m really torn between them; I kind of wake up some mornings and think, ‘Yeah, I definitely like Death Proof more,’ but then I think more about it and I’m like, ‘Planet Terror was better,’ and that’s what great about that film.”

While both Wright and Pegg are enthusiastic about revisiting the horror genre, the latter remains cautious about the idea of using their Grindhouse trailer as a jumping-off point. “With Don’t, Edgar came up with the brilliant idea to use the trailer format to make a short film and a very funny joke,” he says. “And to turn that into a feature would be slightly defeating the point of it, because the joy of Don’t is seeing a 30-strong cast in the 60 best bits from a film that doesn’t exist; the joy of it was making a trailer where you simply showed the sweet shots. But knowing Edgar, he could definitely put together a great film of that ilk.” We couldn’t agree more…