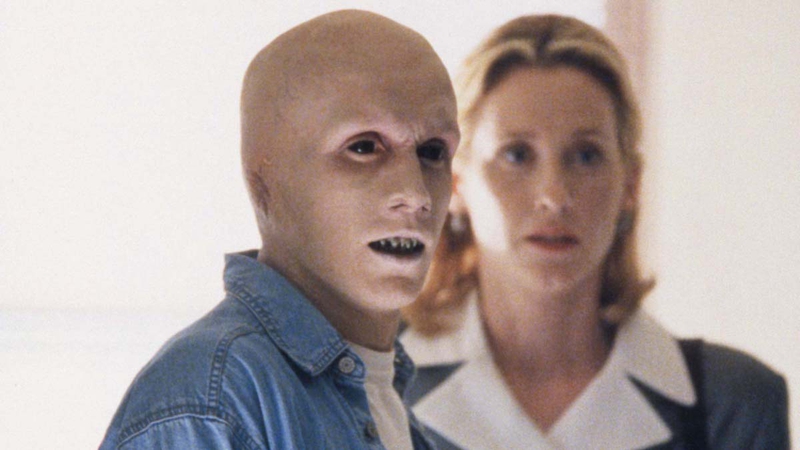 Editor's Note: This was originally published for FANGORIA on May 23, 2003, and we're proud to share it as part of The Gingold Files.

“We’re trying to scare you in ways we’ve never scared you before,” says creator Chris Carter in a supplement on the X Files: The Complete Seventh Season DVD boxed set. Yet too many of these episodes fall back on concepts and approaches familiar from previous seasons, with too few standout stories. This lineup was at its strongest when it took turns toward the offbeat (with a couple of exceptions), but for the most part it was the usual collection of human monsters, small-town stereotypes and descents into a mythology that, by this point, was starting to wear out its welcome.

At least the technical standards were still high—as they are in the set’s sharp, colorful transfers, which replicate the show’s trademark atmospheric lighting well. The episodes are letterboxed at 1.78:1 in a manner that adds picture information on the sides rather than cropping off the top and bottom, and the compositions are largely unaffected, with a couple of the more epic moments given a bit of extra grandeur in the bargain. The audio is Dolby Digital 2.0 Surround and, while it can’t match the complexity and force of the sound for its theatrical brethren, it does the job for a TV show just fine.

As usual, the box is well-stocked with extras, though the choice of episodes to grace with commentaries seems misguided. The talks themselves are varied and informative, but one can’t help thinking of better alternatives as far as those installments are concerned. Creator Chris Carter offers very detailed memories of his sole directorial outing in this collection, the lightweight “First Person Shooter,” covering production, story and casting. But it might have been even more worthwhile to hear his thoughts on wrapping up the mythology in his script for the season closer “Requiem.”

His voice of experience contrasts nicely with the observations of two directing neophytes, actress Gillian Anderson on “all things” and writer Vince Gilligan on “Je Souhaite.” The former episode is clearly ambitious but fatally muddled, and as Anderson’s commentary is primarily concerned with the ideas behind the show, it’s evident that her ambitions may have been bigger than the piece could handle (she notes significant backstory that got lost on the way to airing). Too bad her co-star David Duchovny couldn’t have been wrangled to speak about his own far superior turn at the helm this season, “Hollywood A.D.” Gilligan is laid-back and most engaging as he recalls everything from the advantages doing a hit show can have when securing locations to the price of having someone hum the I Dream of Jeannie theme on screen—yet rather than this uneven entry, one wishes Gilligan could have spoken over the “X-Cops” story he wrote, a far stronger vehicle for his spiky brand of humor.

These and other episodes (good and bad) are briefly covered in a Truth About Season 7 documentary that mixes interviews with occasional set footage and other behind-the-scenes material. Highlights here are shots of Duchovny working with real rattlesnakes on the “Signs and Wonders” set, and a moment where makeup FX creator John Vulich oh-so-casually takes an FX prop out from behind an Emmy Award prominently placed on a shelf in his lab. A collection of deleted scenes are both showcased on their own and accessible via seamless branching within their respective episodes; these feature a few nice character moments, but all of them are expendable, and Carter’s audio commentary on why they were cut basically boils down to: The shows were running long and the pacing had to be tightened.

Other supplements include primers on the characters of AD Skinner and Mulder’s sister Samantha that will be most helpful to newbies (indeed, they were created to accompany trios of episodes repackaged as stand-alone features for overseas release); cast/character lists for each episode (misleadingly placed in Special Features sections); and a group of visual FX vignettes. This last feature is instructive regarding the wide variety of applications CGI can have, from something as spectacular as a vision of Armageddon to a simple fix like preventing a spaceship prop from rocking in a shot.