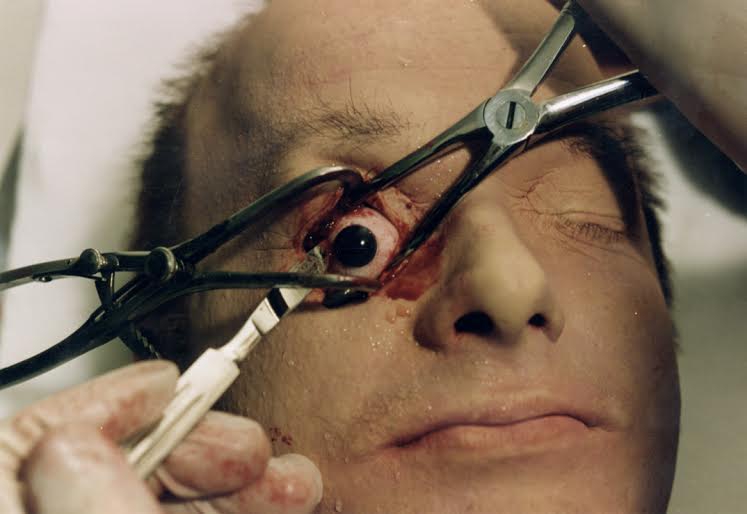 Editor's Note: This was originally published for FANGORIA on May 21, 2001, and we're proud to share it as part of The Gingold Files.

After cramming their Nekromantik DVD with every Jörg Buttgereit-related extra imaginable, what does Barrel Entertainment do for an encore? Dig up a bunch more for Schramm, the director’s 1993 study of a serial killer’s mind. More polished than Nekromantik, it similarly ranges from the genuinely disturbing to the gratuitously grotesque—though despite the subject matter, the most squirm-inducing violence is committed by the twisted title character upon himself (including the infamous scene in which Schramm pounds a nail through his own member). There’s no doubt that it marks an artistic progression from Buttgereit’s controversial debut feature, making it a shame that he hasn’t helmed a feature in several years.

Shot on 16mm (with Super-8 inserts) and blown up to 35mm, Schramm looks great in this fullscreen transfer. The fine mastering results in a perfectly stable picture with excellent detail and realistic colors, along with the expected but mild grain. (Those Super-8 bits are rougher, which isn’t a problem in this context.) The overall ambience is improved by a new stereo sound mix (the original mono audio is also included on a separate track), with new, removable English subtitles.

Two more audio tracks contain commentary by Buttgereit and co-scripter Franz Rodenkirchen, and by actors Florian Koerner von Gustorf (who plays Schramm) and Monika M (who portrays his prostitute neighbor). Buttgereit begins by opining that the talk is necessary "because the film is very hard to understand," but toward the end, he admits that he and Rodenkirchen haven’t done much explaining of the story and themes! That’s OK, because they cover plenty of other interesting topics, particularly how they pulled the film off on a very limited budget; when Buttgereit notes that the penis-nailing scene led him to get the FX creator job on Killer Condom, Rodenkirchen responds, "Your salary [on that film] was the amount of Schramm’s budget!" (They also helpfully reveal that he’s nailing it to a chair, not a table.) In addition, they discuss the movie’s numerous influences, from the films of Luis Buñuel and Claude Sautet to reality TV shows, which were apparently the rage in Germany years before the trend took hold in America.

Von Gustorf and M’s discussion is looser and less informational than the filmmakers’ (and covers some of the same ground), but their enjoyment of revisiting Schramm’s shoot is infectious. Anecdotal at first, the actors’ occasionally raunchy talk eventually becomes more introspective as they dissect their characters and their onscreen relationship and discuss the possibilities of a sequel. Other supplements include early Buttgereit Super-8 shorts (including an award-winning portrait of his father) and a music clip for von Gustorf’s band Mutter, video footage of a boxing match between the actor and one of his bandmates (!) and an extensive gallery of black-and-white and color behind-the-scenes photos from Schramm, the music clip and the commentary recording.

Best of all is a 35-minute documentary about the making of Schramm, the highlights of which are footage of all the Raimi-like camera rigs used to shoot the movie, moments of von Gustorf clowning on the set and an interview with the actor wearing nothing but his shorts. Von Gustorf demonstrates no modesty in either the movie or when being videotaped behind the scenes; by the end of this DVD, you’ll have seen more of his private parts than you’d probably ever want to.