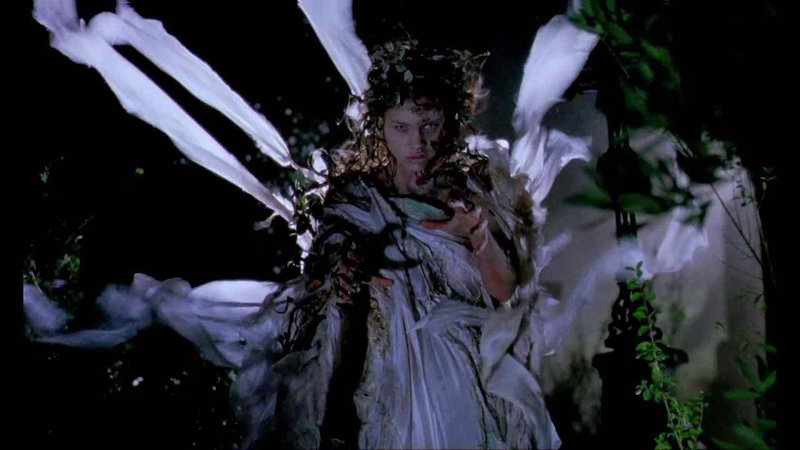 Editor's Note: This was originally published for FANGORIA on May 16, 2006, and we're proud to share it as part of The Gingold Files.

It’s funny how you can get used to a title, or retitle, that seems inappropriate to the point of inciting fan protest when you first hear it. A decade after the Italian zombie film so elegantly named Dellamorte Dellamore in its home country was given the crudely on-the-nose moniker Cemetery Man for its U.S. release, the latter seems to have been accepted by most American genre buffs (much as they’ve become accustomed to referring to Peter Jackson’s third film as Dead Alive instead of Braindead). It must be said that Dellamorte Dellamore defies graceful translation to English (it roughly translates to “Of the dead, of love”)—and yet in the original language, it perfectly expresses the balance of horrific and romantic/dramatic themes in Michele Soavi’s film, a standout among the Italian undead fare that flourished in the wake of Dawn of the Dead.

With apologies to devotees of The Beyond and Lucio Fulci’s other work, there might not be another example of a subgenre’s best entry arriving at the tail end of the trend. Cemetery Man, scripted by Gianni Romoli from a novel by horror comics veteran Tiziano Sclavi, packs in any number of strange, shocking and moving variations on the undead theme, anchored by a compelling lead performance by Rupert Everett as graveyard keeper Francesco Dellamorte. (Despite what many believe, this film has nothing to do with Sclavi’s Dylan Dog comics, though his use of Everett as a visual reference for the titular hero makes the confusion somewhat understandable.) Dellamorte’s particular territory has been plagued with reviving corpses that he calls “returners,” to the point where he has become blasé about shooting them in the head and reinterring them, with the help of his speechless sidekick Gnaghi (Francois Hadji-Lazaro). Romance enters his life in the person of a deceased man’s beautiful widow (Anna Falchi, whose character is billed only as “She”), and soon the new couple are enjoying sex on her former husband’s grave.

For those who have yet to see the movie, I won’t spoil the twists and turns the story takes from there, but it won’t surprise anyone reading this review that some of them get pretty nasty. Yet in addition to the grisly shocks (with ace makeup FX by Sergio Stivaletti), Cemetery Man is also shot through with mordant humor, surreal touches and a meditation on loneliness and human feeling, on the way to one of the most oddly resonant endings in Italian horror history (which echoes, of all things, the celebrated conclusion of the TV series St. Elsewhere). A DVD release of this singular achievement has long been coveted by Stateside fans, who until now have had to make do with import discs.

Finally, it’s Anchor Bay to the rescue with its Cemetery Man DVD. After a long hunt for the right elements, the company has delivered a fine 1.66:1 transfer. Dellamorte’s world is “dead” during the day and “comes alive” at night, reflected in the muted hues and rich blacks, all very well-captured here with laudable sharpness. The Dolby Digital 5.1 and 2.0 Surround soundtracks (English only, though the credits are in Italian) seem a bit limited by the original audio materials, but come across nice and clear. Death is Beautiful on this disc, and that’s the title of Michael Frost’s retrospective featurette, which contains interviews with Soavi, Romoli, Stivaletti and Falchi (the only one speaking English, and still looking great).

Between them, they provide a thorough chronicle of their collaboration (the director, writer and FX artist all met on Dario Argento films) and how Sclavi’s zombie-killing protagonist made his way from a rejected comic book to the big screen. Soavi reveals that he was such a Sclavi fan early on that he called information to get his number, and originally hoped to make a Dylan Dog film; Romoli happily recalls the film’s success in Italy despite its limited release, and is philosophical about the fact that it was “a flop” elsewhere. The only key contributor who couldn’t be corralled for a chat is Everett, though he apparently thought enough of the movie back when it came out to approach its creators with the idea of an American remake. There’s also a trailer (in subtitled Italian) and an eight-page booklet with fine liner notes by Michael Felsher, combining an appreciation of the film with a few more details about its history.

So if, like some of the movie’s ghouls, this Cemetery Man disc doesn’t have a lot of supplemental meat on its bones, what’s there is choice. We got a great-looking transfer on U.S. DVD at last, we got Soavi coming out of genre retirement to talk about it, we got his collaborators having their say. We’ll take it.