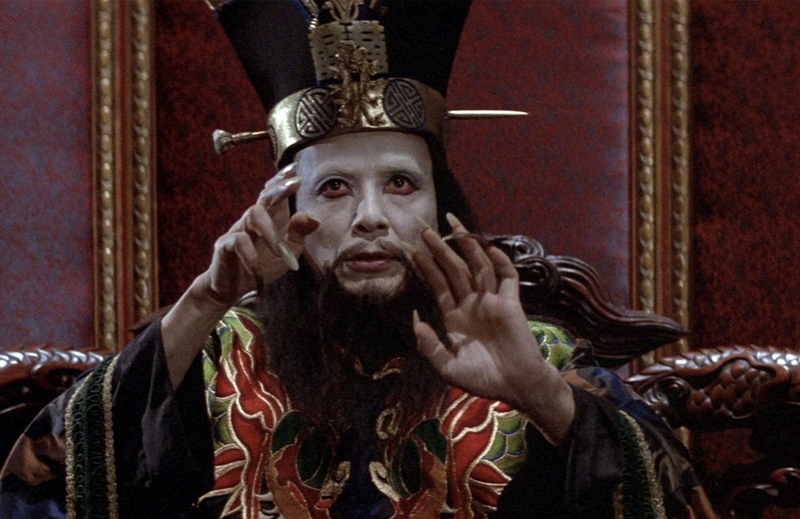 Editor's Note: This was originally published for FANGORIA on May 22, 2001, and we're proud to share it as part of The Gingold Files.

Who says video companies don’t listen to the fans? When Fox polled DVD devotees on what title they’d most like to see on disc, John Carpenter’s Big Trouble in Little China topped the responses by two to one over the next competitor, and the result is a double-disc set that should give the movie a whole new life. A flop in theaters, Big Trouble wound up being discovered on video—rather surprising given how badly the film is compromised by fullscreen cropping, which cramps both the striking visuals and the busy fight scenes, and causes at least one literal throwaway gag to get completely lost. Even the previous laserdisc edition, which cropboxed the movie at 1.85:1, didn’t pass muster.

At long last, the DVD restores Big Trouble to visual brilliance. The 2.35:1 transfer is exceptional, with great detail and ravishing color that does full justice to and reveals fresh detail in John J. Lloyd’s expansive production design (the alley in which the first major battle takes place was an indoor set!) and April Ferry’s opulent costumes. The audio, available in Dolby Digital 4.1 and DTS 5.1 Surround, is active and punchy, and the varied animated menu screens echo the movie’s atmosphere perfectly.

Those screens navigate among many extras, chief among them an audio commentary by Carpenter and star Kurt Russell that’s just as much fun as those on the Escape from New York laserdisc and The Thing DVD. "It seems like with every one of the films we do together, people get it later," the director says, and indeed Big Trouble was way ahead of its time in translating Asian action/fantasy themes into an American studio feature. The marketing was part of the problem, as Carpenter and Russell explain that Fox didn’t quite understand the movie, particularly Russell’s swaggering but ineffectual hero. It’s a treat to listen to the guys as they discuss the movie’s origins as a Western, problems they faced with the Asian-American community and the fact that, at the time, both of them were in need of a hit (Carpenter calls Starman his “penance” for The Thing). Even when they go off on tangents, which is often (covering everything from the craft of acting to how their kids are doing), the two are compulsively listenable. One is left thinking that Carpenter should do all his commentaries with Russell, even on the films the actor isn’t in.

The second disc contains a treasure trove of supplemental material. Most notable is a collection of deleted and extended scenes, significantly a lengthier ending that gives Victor Wong’s character a more meaningful departure and allows the airport kidnappers to get their comeuppance. There are also video interview segments with visual FX creator Richard Edlund and a pair of reprinted magazine articles that examine the technical sides of the production (and which all contain clickable video and graphic material), the great trailers and not-so-great TV spots, a gallery of stills and promo art pieces (many of them rare) and the old making-of featurette, which is no better than one would expect.

But another artifact from 1986 will be the pièce de résistance for longtime fans: the original music video of the end-title song, performed by Carpenter and cohorts Nick Castle and Tommy Lee Wallace as “The Coupe de Villes.” It’s a gloriously goofy relic from the summer when every studio release (with the possible sole exception of Aliens) had an MTV tie-in clip released. It’s hard to know whether Carpenter and co. were kidding with this one—but if it’s true that, as the director claims on the audio commentary, he got the Elvis job because Halloween established him as a director who knew music, it’s a good thing this video wasn’t around at the time.