The skulls and florals are in abundance in this gorgeously gruesome music video. 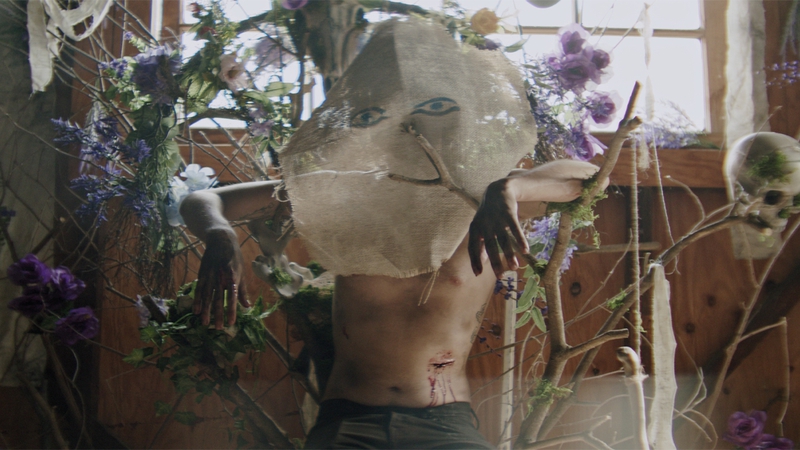 Folk horror fans, rejoice! Director Adam Murray and Los Angeles-based band, Donator have just released a new music video dripping with folk horror references. We half expected Angel Blake to make a cameo. The tune is deceptively catchy and cheerful, the flowers are in full bloom, juxtaposed against blood and horror, (just the way we like it). A floral blend of torture and titillating tunes. Here's what Murray had to say about the long road to completion and collaborating with Donator.

I first talked with Morgan (one half of Donator) back in 2019 about doing a music video, and the concept we had at the time was a completely different idea for a different song. It involved a tap dance number and mannequins coming to life at night, and was more inspired by movies like Stormy Weather and Pennies from Heaven.

Then the Covid lockdown happened and all of that was thrown out the window. As vaccinations were rolling out, and I felt comfortable with the idea of having multiple people on a set again, I reached out to Morgan and asked if he wanted to get back to working on something together.

He had recently moved to a new place and sent me photos of his backyard. I saw the garage interior, the shed, and the really beautiful ivy and flowers that were all over the place and almost immediately jumped to the idea of doing something with folk horror influences.

I pitched the idea to Morgan and Nick, drafted up some storyboards, and we were all on the same page. As soon as we got the idea locked in, I immediately reached out to my friend Dave Child, who plays the leader of the Flower Family in the video. He’s one of the people I originally had in mind for the first video concept, and I knew I needed him to make this whole idea work. Through the help of Lola Blanc, I got put in contact with Zoe Kirkpatrick, whose contortionist work I had seen in Fatale Collective: BLEED, and wanted to get her on board to really make things creepier.

Visually, I was inspired by 1970s English folk horror the most. The Wicker Man, Blood on Satan’s Claw, and the Doomwatch movie. Some Italian Horror as well, like The Beyond and All the Colors of the Dark. And obviously Midsommar, because Midsommar rules.

There is a loose narrative happening throughout the video, but at the end of the day, I was trying my best to blend visuals of British folk horror with deep woods Appalachian nightmares.

I really want to highlight our crew and cast because we put this together on a shoestring budget and filmed it during some of the hottest days of the year. Every member of our team is incredible.

Watch the full video below: