Exclusive Interview: Director Scott Cooper On ANTLERS And Its Long Road To Release 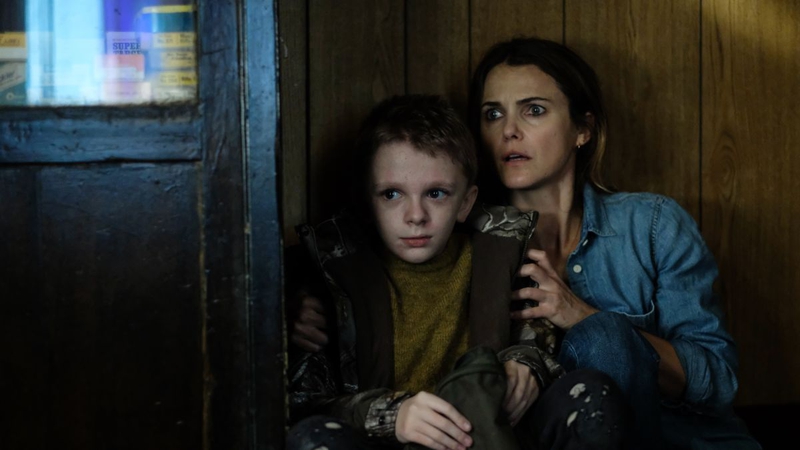 Back when this writer first spoke with Scott Cooper in January 2020, his rural horror film Antlers was close to completion and set for release in April of that year. FANGORIA #7, containing that interview, went off to the printer…and then the pandemic happened, and Antlers was rescheduled by Searchlight Pictures for February 2021 before finally landing on this Friday, October 29. So, to follow up on that chat, we caught up with Cooper again to discuss the delay and more details about Antlers.

Scripted by C. Henry Chaisson, Nick Antosca, and Cooper based on Antosca’s short story “The Quiet Boy,” with Guillermo del Toro as a producer, Antlers is set in Cispus Falls, a small town existing under a pall of gloom since the closing of the mine that was its principal business. Schoolteacher Julia Meadows (Keri Russell), who recently returned to the site of her abusive childhood, notices odd behavior on the part of twelve-year-old pupil Lucas Weaver (Jeremy T. Thomas). It turns out Lucas has a horrible family secret of his own back at his house—one that breaks out to wreak horrific carnage. Drenched with atmosphere (courtesy of cinematographer Florian Hoffmeister) and rife with themes of societal breakdown and the Earth striking back against mankind—with dashes of Native American mythology—Antlers also boasts impressive creature FX by Legacy Effects and Shane Mahan.

How has your mood been, waiting the year and a half that it has taken Antlers to see release?

There was some frustration, only because the movie was finished over eighteen months ago. But I’m thankful that Searchlight and the execs at Disney stood true to their word, and said, “Horror is best experienced communally. We love the film, we’ll wait this out,” and they sure have. There are a lot of great films in the marketplace as ours opens up on Friday, but apart from that, I’m happy that people are going back to the theaters at all, and I just hope they will ultimately find this film on a big screen, because I composed almost every frame and shot so that it’s best experienced on as large a screen as you can find.

How did you and Hoffmeister approach Antlers’ visual scheme, and how did you find the marvelously evocative locations?

In all of my films, the atmosphere is very important—the setting, the locale. Though Antlers was shot in Vancouver, I set it in coastal Oregon, for a few reasons. That region holds a certain gloomy mystery; I love the light, the leaden skies, the low-hanging clouds. And I’m also interested in places that are kind of left behind, small cities that owed their success to a particular industry, whose civic life was built around a factory or a mine, and then the fabric of that town changes once that factory or mine closes. This fictitious town of Cispus Falls felt like the perfect expression of a lot of places in America’s heartland, with a gutting of their industrial backbone.

Florian and I discussed that I never wanted to shoot the film in any sun. Any time the sun came out, we went into cover set, and generally, it’s just the opposite when making a film. And I wanted the locations to express how incredible our natural resources are in North America, and the destruction we’re causing to them. I also wanted to express the idea of this young boy with big problems, and Lucas has many problems; he’s far too young to shoulder the responsibilities that he must. We used the Sony Venice camera, which is essentially a large-format digital camera; it’s actually my first movie that I’ve shot digitally.

One of the things we talked about in our previous interview was the idea of what you called “deaths of despair”—Americans dying due to different societal problems and addictions—and this was before the pandemic. Do you feel Antlers is even more relevant now?

Yeah; Guillermo told me, when he watched Antlers again, “I think the film has taken on more relevance, sadly, through the pandemic.” Those “deaths of despair” have now far surpassed anything we’ve seen since the dawn of the 20th century. This unprecedented epidemic of suicides and drug- and alcohol-related deaths—all of that, I wanted to gently weave into the narrative. For me, the scariest thing in the film is the horrors of generational trauma and the “deaths of despair” that kind of sit over this small town like an invisible gas, as opposed to dealing with an angry Wendigo. There are a lot of towns in America, much like Cispus Falls, and I believe people tend to turn a blind eye to them.

The monster stuff also really lands, though. What percentage of that was practical, and how much was digital?

A lot of it was practical. I don’t know what the percentage is, but most everything in the mine, or at least 80 percent, was practical. Some of the sequences, like the one in the shed, had some CGI, but the folks at Legacy Effects were quite remarkable. It was an eye-opening experience because Antlers was my first immersion into the supernatural, albeit a rather grounded experience. And I have to say, I wouldn’t have made the film if not for Guillermo—certainly dealing with the creatures, because he’s one of the most experienced we have, and the best at it.

Who performed the creature on set?

His name was Dorian Kingi, and he was absolutely fantastic, because that suit was heavy, that suit was cumbersome. At times it took four people, I believe, to hold him up, just because it was such a large piece. I have to say, the work that went into it was truly impressive, from inception through the production of the Wendigo, through completion and the digital effects. Again, I don’t employ a great deal of visual effects in my films, but it was a terrific experience combining my grounded approach and Guillermo’s more fantastical approach to filmmaking.

Once you knew that Antlers was going to be delayed for a while, did you have any thoughts about fine-tuning it further?

Oh, of course. The studio was very happy with it, but filmmakers are rarely pleased with how a movie turns out. You’re never quite satisfied until you’re in your grave [laughs] because filmmaking revolves around how you’re feeling at a certain moment, what you’re trying to express. I mean, I would still be cutting Antlers if we had the time and the resources. Even when I go back to my first film, Crazy Heart, I think, “Oh, I could have done this better, I could have done this differently.” Antlers is certainly no different, but I never touched it once, once I’d locked picture. It always helps to be able to go back and look at a film with fresh eyes, though with release schedules and all that stuff, being able to have a very clear eye while making a film is also important. But it takes a lot of time.

Antlers is now playing in theaters.