Did Bubba Do It? DARK NIGHT OF THE SCARECROW Lives On

"Could it be the scarecrow?" 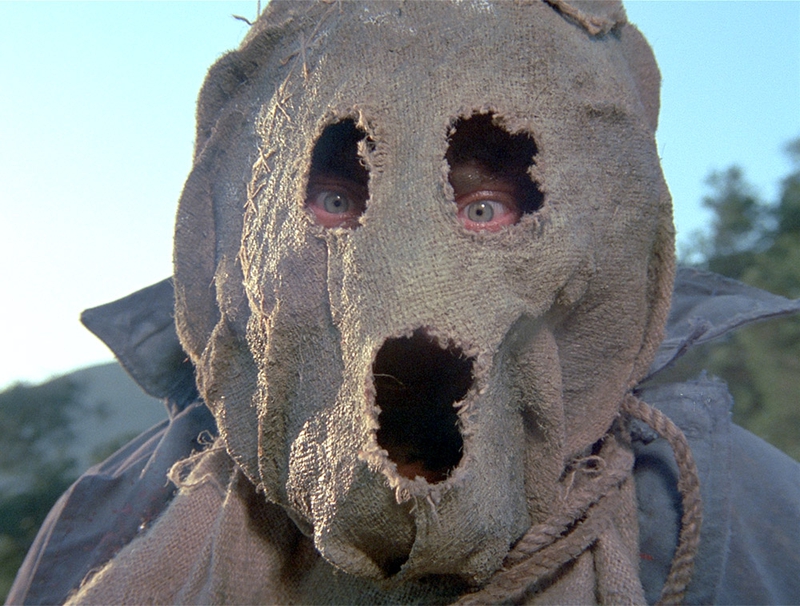 It was Saturday night. October 24th, 1981, to be exact. The heyday of the early 1970s made-for-TV genre movie was in the rearview mirror, leaving behind the Zuni Fetish doll from Trilogy of Terror, the gargoyles in the aptly titled Gargoyles, and Skorzeny, the unstoppable vampire of The Night Stalker, in its glorious wake.

No one could have expected what was about to drift through the airwaves into millions of homes nestled throughout the sleepy streets on that chilly October evening. The CBS Saturday Night Movies bumper promise that Dark Night of the Scarecrow would be a body count film, where “One by one, the men of this town are dying.” Afterward, the foreboding voiceover asks, “Could it be the scarecrow?” And, right before our eyes, a celebrated TV movie classic was born.

Surprisingly, Dark Night of the Scarecrow didn’t leave much of a mark the night it premiered. It is only through subsequent re-airings on basic cable (TBS, we love you) and various home video releases that the film has found a loyal audience, ultimately proving that late entry made for TV genre fare still has the ability to shock and scare. Lucky for us, Scarecrow is now streaming on Shudder (also available with AMC+) this month as part of their “The Home for Halloween” lineup. 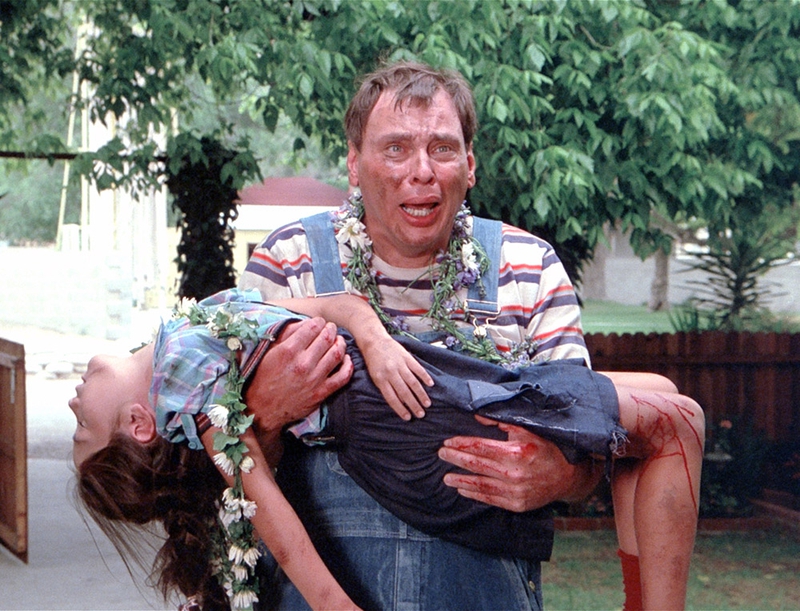 For the uninitiated, Larry Drake is Bubba, a mentally disabled man with the mind of a six-year-old and the body of a hulking 36-year-old male. Despite his gentle nature, some townsfolk believe Bubba will harm his little friend Marylee (Tonya Crowe), including a small, imbecilic posse run by a man named Otis P. Hazelrigg (Charles Durning in a truly menacing turn). One day Bubba and Marylee find themselves in the path of an angry dog, and she is attacked. The angry mob believes it was Bubba who orchestrated the assault, and they hunt him down, despite his childlike cries of “Bubba didn’t do it!” He is shot and killed while hiding inside the husk of a scarecrow getup. Afterward, the men learn that Bubba actually saved Marylee from the vicious animal. The crime goes to court, but the four men are set free. Soon after, someone… or something… starts stalking and killing the vigilantes, with the murderer displaying a scarecrow near each intended victim before “it” strikes. As the announcer in CBS’s bumper suggests, “Could it be the scarecrow?” 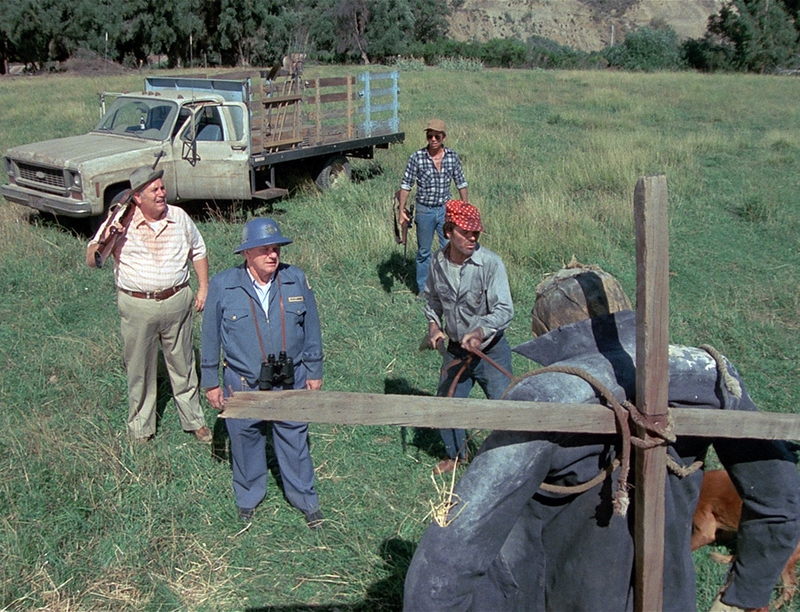 The premise presented here might lead one to believe there is truth in advertising. While many may consider the body count somewhat light, Dark Night of the Scarecrow is indeed a supernatural slasher, and it fits comfortably in what is considered the golden era of the slasher subgenre. However, Charles Durning saw the film quite differently.

In an interview with Ray Benson, the Television Editor of South Carolina newspaper The Sun, Durning confesses that while he is a longtime lover of classic horror cinema and a big fan of actors like Bela Lugosi and Boris Karloff, he felt the more modern fare of the 1980s left much to be desired. Durning said, “Every five minutes they are figuring out a way to kill someone and make it even more photographic. That turns me off.”

Durning was drawn to the more subtle approach taken in J.D. Feigelson’s screenplay. He told Benson, “You assumed something terrible happened but you never see it on the screen… It’s in the supernatural vein but we use very little special effects… we use a lot of camera work for the viewer to see what’s going on in the minds of the people who perpetrated this thing.”

Perhaps Durning didn’t recognize the slasher blueprint that Dark Night of the Scarecrow was working with because there is enough here to also separate it from the pack. The film employs many of the most common tropes of the slasher (suspenseful stalking, creative kills, etc.), but it is also an unusual entry, particularly because the Final Girl is actually a girl, not even a teenager. In some ways, Marylee aligns beautifully with the general consensus that the Final Girl is virginal, smart, and curious. Although what’s interesting here is not just that she is so young, but she is also fearless. Rather than finding empowerment through a final confrontation, it is clear when Hazelrigg corners her at the school dance, Marylee is not - nor has she ever been - afraid of him. 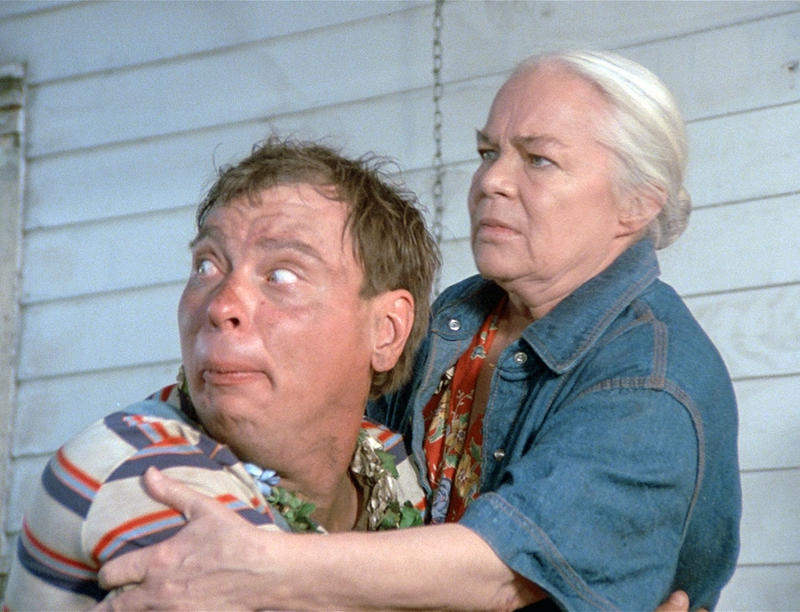 In fact, the only two characters strong enough to stand up to Hazelrigg are both women. One is, of course, Marylee. But don’t count out Bubba’s mother, Mrs. Ritter (Jocelyn Brando), who consistently stands up to Hazelrigg and ensures that he never forgets he’s to blame… and that justice is coming. This becomes a trigger for Hazelrigg because it shows his weakness. And it underscores why he reacts so violently against those who are supposed to be his lesser.

What makes this film even more stunning is that Dark Night of the Scarecrow blurs the lines of evil. Is the villain who is killing Hazelrigg’s henchmen, or is it Hazelrigg and his posse? As Durning states, this movie walks in the shoes of the bad guys, and Otis P. Hazelrigg is easily one of the most reprehensible reprobates in a made-for-TV movie. He’s possibly (probably) a pedophile and about as unlikeable as characters come. However, thanks to Durning’s compelling approach to the material, you can’t take your eyes off the screen. The actor told Benson that he was excited to finally take on a horror picture, and to the late great Durning’s credit, every ounce of his being in the film is smarmy and questionable. (Durning actually replaced Strother Martin, who died before the film went into production.) 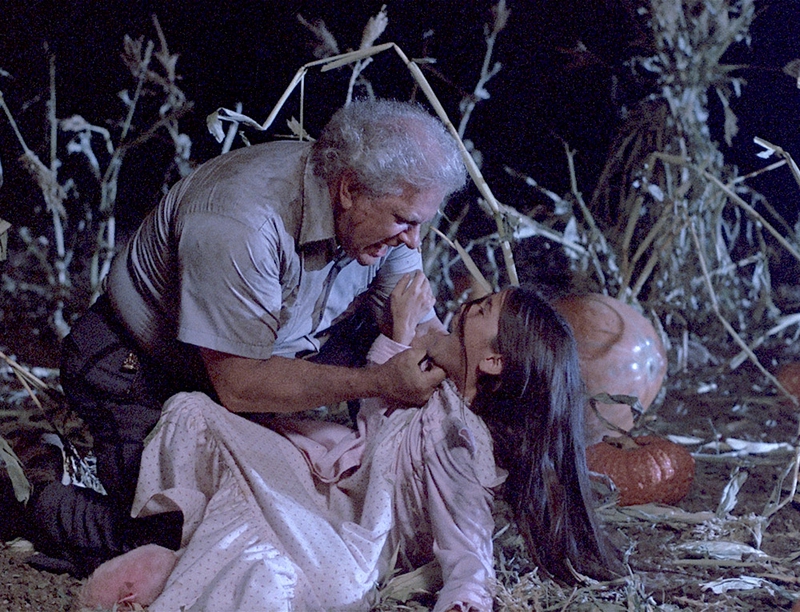 Yet, despite a hostile vigilante mob, the brutal murder of a mentally disabled man, and even though the telefilm spends most of its time following an unnerving sex pest, a sense of innocence pierces through each frame. This is because Dark Night of the Scarecrow is anchored by Marylee and the sympathetic and heart-wrenching Bubba. And although he is killed early on, Bubba remains a childlike ghost haunting every scene.

Feigelson and director Frank De Felitta accomplish all of this by employing the less-is-more approach, which is not an uncommon device used for the more restrictive venue of the made-for-TV movie medium. The rural landscape provides a gothic chill that replaces visceral violence. There is a heavy emphasis on atmosphere and, even more importantly, the characters and the crime. It is a glowing example that the small screen genre film was actually not something of the past, it was still being produced with more yet to come. The TV horror movies of the 1980s saw the release of films like the other classic supernatural slasher Don’t Go to Sleep, a flashy and suspenseful remake of William Castle’s 1965 film I Saw What You Did , as well as whacky but entertaining fare such as People Across the Lake, the gooey and fun Stepford Wives sequel, The Stepford Children, and so much more.

Maybe Bubba did do it. Four decades later (and counting), Dark Night of the Scarecrow still draws in loyal fans because of its ability to walk confidently along these lines. It is at once a great little slasher, while also providing a wonderful example of near-perfect made for TV horror.

Dark Night of the Scarecrow is now streaming on Shudder (also available with AMC+) this month as part of their “The Home for Halloween” lineup.