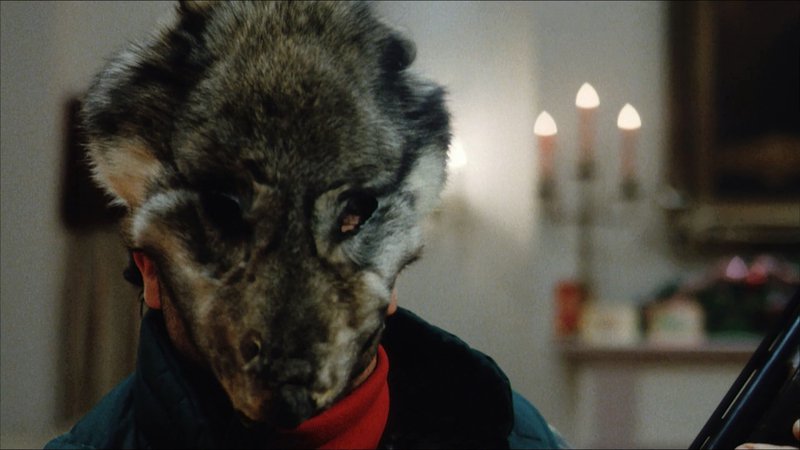 It’s Christmas Eve, and wholesome little white bread Alex Torme glows as the family prepares for the festivities to begin. All except his father, that is, who is busy screaming down the phone at the wife of a man whom he recently fired – yes, on Christmas Eve – so we already have a feeling that karmic retribution will be no doubt impressive. We don't need to wait long to have this confirmed as the husband of the woman on the phone, the newly-unemployed Norman Perkins (Duane Whitaker), bursts into the opulent home wearing a satisfyingly creepy animal mask and shoots Alex's parents to death in front of the young child. You read right: Norman Perkins. You want a name drenched in slasher history, its love for Hitchcock's Psycho embellished on its sleeve? You got it!

Alex grows up and, shunning the family business, the young man decides to become a writer, much to the chagrin of his corporate dickhead brother Jack (Xander Berkeley, who’d revisit horror decades later as Gregory in The Walking Dead). Played by Mitchell Anderson, you can tell Alex is an artist because his hair is long and he doesn’t wear a tie, apparently traditional markers of not being a corporate dickhead. But, riddled with understandable childhood trauma from seeing his parents gunned down in front of him, Alex has bigger things to deal with than pressure from his brother about the direction of his future career. Everywhere Alex goes, he sees the same masked figure who killed his parents, stalking and tormenting him, pushing him closer and closer to the edge. Is the supposedly dead Perkins back to finish Alex off after leaving him alive at the time of the original murders, or is there something more insidious and all-round gaslit on the agenda? Watch Kristine Peterson’s Deadly Dreams to find out…

Peterson is perhaps most immediately known to horror folk as the director of 1991’s Critters 3, whose big claim to fame is that it provided a very young Leonardo DiCaprio with his feature film debut. But to reduce Peterson’s donation to cinema – even just genre cinema – to that is a gross injustice, as a look at her wider career is genuinely mind-boggling. She started in the film industry working for nowhere other than American Zoetrope during the period Francis Ford Coppola was making 1979’s Apocalypse Now (you might have heard of it – it’s no Critters 3, but he gave it his best, I’m sure). Just before she released Deadly Dreams, her first assistant director credits include Bill & Ted's Excellent Adventure in 1989, and fellow woman horror director Amy Holden Jones's Maid to Order in 1987, a comedy starring Ally Sheedy, the iconic, dandruff-ridden goth from John Hughes' The Breakfast Club .

But it’s Peterson’s work in genre that renders her a name every horror film fan should know. As a director, she did work across a number of other genres; Deadly Dreams was Peterson's directorial debut, and aside from maintaining her interest in horror with Critters 3, she would soon follow with the thrillers Body Chemistry and Lower Level, action films including The Hard Truth and The Redemption: Kickboxer 5, wrapping up her directorial filmography with 1997's underrated Seattle-set grunge girl band queer classic Slaves to the Underground. But observing her credits as first assistant director, we start to get a much clearer idea of what drew her to horror in Deadly Dreams and Critters 3, having worked in the role in films such as Jim Wynorski's Chopping Mall, Armand Mastroianni's The Supernaturals, Robert Collector's Nightflyers, and then – after the release of Deadly Dreams – Stephen Hopkins's A Nightmare on Elm Street 5: The Dream Child in 1989, and the first of the Tremors films, directed by Ron Underwood in 1990. Although not as well known a movie, Peterson was also the first AD on what should be a major cult film but for some bewildering reason still isn’t: Janet Greek’s girl gang rape-revenge film The Ladies Club, an important film in the history of women-directed movies in a category still broadly considered to be, well, a Men’s Club.

The little discussion that exists about Deadly Dreams stems predominantly from irony-farming dudebros, who at best somehow manage to suspend their eye-rolling long enough to push out a “so bad it’s good” or “guilty pleasure” chestnut as a backhanded compliment. How much of this has to do with the gender of the director we can only speculate (and speculate I do), but to be fair, Deadly Dreams is a low-budget late-'80s horror film and comes with all that entails: retro fashions that may rightfully prompt chuckles, some hammy acting and flimsy sets, and perhaps not the most tightly crafted screenplay, written by a guy called Thom Babbes, who also played Alex's dodgy best friend Danny.

Danny, however, is a useful point of entry back into the film, because – like so many characters of this era in slasher – he is such a tremendous prick. It’s an odd observation to make, perhaps, but one of my favourite things about slasher films from the '80s especially is just how unambiguously ghastly most, if not all, the characters actually are. This is no accident; it simply means we thrill more when they are inevitably killed off, as the codes and conventions of the subgenre promise us before the film even begins. Even Alex himself is a borderline douchebag; is he a shrill rich boy, possible sex pest and privileged brat? Or does his childhood trauma inoculate him from such harsh judgements?

Deadly Dreams is proudly an '80s slasher film – this is obviously no Ken Loach manifesto about class injustice – but through its emphasis on Norman Perkins’ lower class status and the fact that it is his spectre that is the central ominous force in the film is no coincidence. Deadly Dreams is a fascinating film if only for how explicit it is about the class anxieties of the rich. You mean the poor that we mock and mine to make our fortunes might somehow find a way to fight back? You bet your bippy they do.