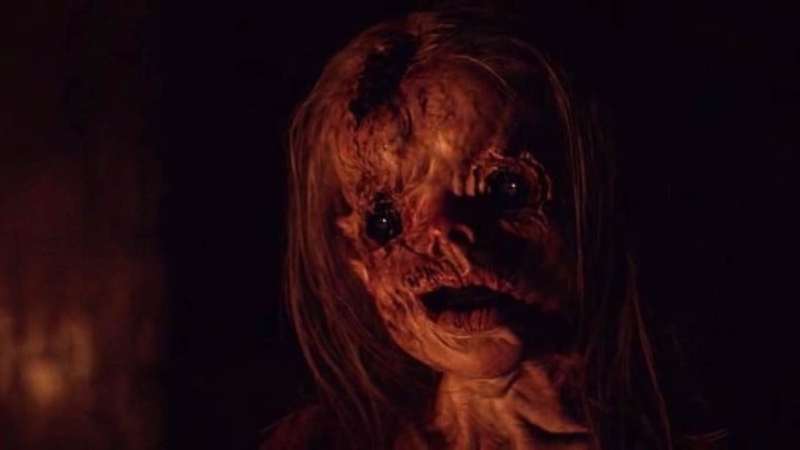 Editor's Note: This was originally published for FANGORIA on January 23, 2015, and we're proud to share it as part of The Gingold Files.

Among the genre features world-premiering in the Park City at Midnight section of this year’s Sundance Film Festival, one of the most promising is the Ireland-set supernatural chiller The Hallow. FANGORIA got an exclusive pre-fest interview with director Corin Hardy to preview his grim fairy tale.

Hardy, who scripted The Hallow with Felipe Marino, is a fast-rising talent who is now attached to direct the long-mooted remake of The Crow. In The Hallow, he directs a cast that includes Joseph Mawle from Abraham Lincoln: Vampire Hunter and The Awakening, Drag Me to Hell’s Bojana Novakovic and Ben Wheatley regular Michael Smiley.

Can you talk about making the transition from your short/music-video work to your first feature?

That process began during my younger years as a teenager addicted to FANGORIA, making pilgrimages to London specially to buy this magazine full of monsters and wonder. From that, and being horror-loving teenagers, we would make Evil Dead imitations on weekends. That led to wanting to do special effects and make monsters and studying at art school, and ended up with me making my first short, Butterfly, which was a stop-motion film. That took five years to make, and got into the Edinburgh Film Festival, and I won some attention from people seeing it there. I went on to do music videos, in which I always tried to tell stories and experimented with technique, and while making those I started writing and developing feature projects, all of which were horror movies and most of which involved monsters.

I strove to come up with fresh spins and new creatures, and when I came up with The Hallow, I wanted to make a film about fairy tales in a grounded way that explored the link between folklore and a kind of gritty reality. I pitched it around during a trip to LA, and Occupant Entertainment became interested and helped me develop it.

What can you tell us about the storyline and its inspirations?

I’m a big fan of vampires, werewolves and zombies, but I felt like I’d seen enough of those, and wanted to come up with something we hadn’t seen so much of on screen. I’m a big fan of ’70s horror movies and thrillers like Straw Dogs, Deliverance and Jaws, and I had the idea to do a film about old legends based in Ireland, which feels like the home of the original dark mythology, and give it that sense of reality. A lot of movies on those subjects tend to be fantastical and magical and aimed at children, and I wanted to do one that came from a much darker place, blending something like Straw Dogs, which is the original home-invasion film, with the imagination of Pan’s Labyrinth. The goal was to keep it balanced so that the mysteries and fears and creatures you associate with fairy tales were grounded in a more dramatic reality. That led me to try to find parallels between folklore and science and nature, and ask, if these beings were real, how would they fit into our world right now, in a contemporary way? It’s not based in magic, but more about nature, and things that dwell in the forest.

So I then came up with a story about a couple who come to a rural area from London. He’s a conservationist who works in forestry, and it’s based on the reality of the moment; in Ireland, there’s a situation where they have to sell off a lot of their woodlands, because of the economy. So this man is sent over to survey of a section of forest that’s being sold, and assess its value. He brings his wife and their newborn baby with him, and they’re struggling as new parents, so it’s kind of a new start for them in this beautiful environment. The locals appear to disapprove of him being there, because of what his job entails, but as we come to find out, it actually has to do with what’s living in the woods—something they hold sacred and that they’re fearful of. That is the Hallow, and it comes to the house at night and seems to want to steal their child, and it goes from there.

Is the film’s mythology based on any specific legends, or is it your own original concept?

It’s based on various different tales. Just talking about folklore, there’s so much of it from around the world, and particularly from Ireland, that there’s an infinite array of wonderful ideas. Part of the challenge in writing The Hallow was working out what to keep, and find a way to incorporate it into my story, as well as what not to use. Some of the legends are so complex or strange, and I wanted the film to be very visceral and primal, so you could relate to it. In a horror movie, you have to identify with the characters and understand what’s happening, even if it’s bizarre, and quite a lot of the folklore was too complicated to include.

It is all based on certain rules, though, and I wanted to find the ones that made sense in the old stories. For instance, it’s said that fairies can’t take iron, so the notion of protecting yourself with articles made of iron became involved, and there’s talk of things like changelings and banshees sometimes stealing children or babies and replacing them. It was all about finding ways to use these ideas to tell an exciting, scary story, again giving it that sense of reality.

How did you find your cast, and who created your creature FX?

I’m a huge, longtime fan of Joseph Mawle. He’s a fantastic British actor, and I’ve always been blown away by his intensity. He comes from the same place as Robert De Niro and those character actors who are incredibly deep. He generally doesn’t have the lead; he’s always playing supporting roles, but I sort of wrote the film for him, and was very pleased when he agreed to do it. He brings a great depth to the part, as does Bojana Novakovic. I wanted to find actors who were capable, first and foremost, but also had that extra screen charisma, and together they form a unique and very convincing couple. It was important to find two people who could make you believe in them, and it was important that their relationship feel genuine.

It was a real journey with them, because they go through some very tense moments, together and separately. Everything was done on a low budget, and it was real and grimy and tough, with lots of night shoots and prosthetic makeup. It wasn’t always comfortable, but they were fantastic. The film is predominantly a two-hander about this couple, so there aren’t a great deal of characters in it, but I did use some great Irish actors in supporting roles. Michael McElhatton, whom people might know from Game of Thrones, plays a local farmer, Colm.

And then, to talk about the creatures, that was the thing I thought about the most, for the longest time. Being a big fan of monsters, from seeing Ray Harryhausen movies as a child and then growing up watching Alien and The Evil Dead and The Exorcist, I’ve always loved makeup and prosthetics, and preferred the old-fashioned methods over CGI. That said, I wanted to mix up the various effects techniques to create an unreal effect that the audience couldn’t pin down or put their finger on, so they couldn’t tell if it was CG or animatronics.

I set out to find a current UK Stan Winston or Rob Bottin, and a lot of people recommended John Nolan, who had worked on the animatronics teams of films like Hellboy II and had a small company in England. I contacted him about The Hallow probably about a year before we actually got it financed, and talked about how I wanted to do the creatures, to keep them as real as possible and on camera as possible, and use a mixture of techniques—puppetry, prosthetics, animatronics, a bit of stop-motion—with visual effects to support and augment them, but not to base it in CGI. It was very much a challenge, especially with the tight budget we had; on a relatively contained, small movie, we had full-body suits, animatronic heads and arms, an animatronic baby, makeup effects and gore.

Then I collaborated with the visual effects supervisor, Stephen Coren, and Windmill Lane, an Irish digital/postproduction house, to help finalize the illusions. We were able to design the creature suits so that the actors performing in them could puppeteer the suits themselves in certain ways, and then parts could be digitally painted out. We tried to mix everything up so that even though various techniques are happening on screen, you won’t be thinking about any of that; you’ll just believe the monsters are real [laughs].