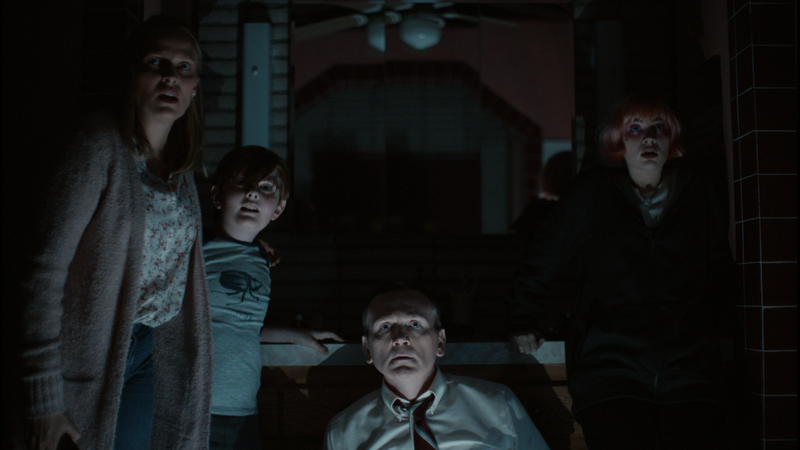 For years now I’ve found myself obsessed with single-location horror, both in my viewing and reading habits, as well as in my own writing. My novel, The Nightly Disease, takes place in a hotel (based on my experience working night audit). My werewolf bromance, Carnivorous Lunar Activities, spends much of its page count in a basement. My novella, We Need to Do Something, begins and ends entirely in a residential bathroom — same goes for its film adaptation, penned by myself and directed by Sean King O’Grady, out today in theaters and video-on-demand from IFC Midnight.

Some of my favorite horror films exercise similar restraints. In The Thing, we never leave the research station. In Evil Dead and Evil Dead II, we focus on the cabin and the woods surrounding it. Aside from a few exceptions, The Shining locks us away in the Overlook with the rest of the Torrances. In The Autopsy of Jane Doe, we have fun in a morgue. Movies like Rope and The Invitation utilize dinner parties in dark and clever ways. Green Room is (mostly) in a green room. Buried is in a coffin. Demons is in a movie theater. Cube is in a cube. The Lighthouse is in a…lighthouse. Romero’s original Dead trilogy embraces this subgenre in each installment: Night barricades its characters in a house, Dawn holes up in a shopping mall, and Day submerges itself into an underground bunker.

From an artificial perspective, single-location horror movies are often dismissed as convenient workarounds to small budgets. I don’t think this is always untrue, but I also fail to comprehend why these solutions would be viewed negatively, especially after considering the effectiveness of the titles referenced in the previous paragraph.

The quality of my own writing is at its most exciting when taking advantage of these limited settings, regardless of the format. After several published novels and one produced screenplay, I can safely admit I’ve given this topic a lot of thought. Why do I prefer writing (and viewing) horror confined to one specific area? For one thing, when you lock your characters in a room, you are immediately introducing a set of rules. It’s not often discussed in craft books, but rules are a secret weapon when it comes to writing. Rules keep you on track. They prevent you from losing focus on what’s most important when developing a narrative.

For example, with We Need to Do Something, I knew from my first brainstorming sessions that the family trapped inside this bathroom would never escape, they would be stuck there throughout the runtime — at least, possibly, until the very end, which I won’t spoil here. Do they eventually make it out? Guess you’ll have to watch the movie! Anyway, with this restriction in place, I was then able to start thinking about how a story of this nature might unfold. Now that I knew what these characters couldn’t do, it was time to decide what they could do. It is incredibly easier to figure out what’s possible once you decide what’s impossible. I think writer’s block can sometimes occur when you approach a story with the mindset that anything is a possibility. Indecisiveness is every writer’s worst enemy. The best way to fight it is by narrowing down your choices.

It’s fun figuring out these rules when watching horror movies. With something like Dawn of the Dead, once they make it to the mall, you know pretty much right away they’re not suddenly going to decide to pack up and abandon it halfway through the film. Once they’re there, they’re there. The mall is the movie. Leaving it behind before we’ve had a chance to fully experience it would not only be cheating the audience, it would also be cheating the filmmaker of their full potential. Plus, it’s exciting to explore a place. Some of my favorite scenes in Dawn involve the characters taking stock of what’s available in the stores. I am also a huge fan of dialogue-driven stories, and when characters are stuck together, copious dialogue is unavoidable. I understand that “show, don’t tell” is the standard writing advice people always give, but sometimes I prefer the opposite. Sometimes I want to watch a group of people sit around in a room and talk for two hours.

When pulled off correctly, certain settings can transcend location. The audience and the filmmakers will start thinking of them more as characters than buildings. Think of the hotel from The Shining, or the cabin from Evil Dead. These are places that any fan of the genre would recognize upon first sight. Their importance in the story is just as significant as any of the other cast members.

With that said, narrative restrictions can sometimes be broken — I’m looking at you, Beyond the Black Rainbow — and it’s the knowledge that this change is possible that makes everything so thrilling. However, when a movie presents the idea that everything is possible from scene one, that’s when it begins to lose me. Maybe this is why I seldom find superhero movies appealing. They can do anything and go anywhere, and there’s nothing in the world I find more boring. This is less of a critique of superhero movies and more of a confession of how my brain operates.

Recently, while contemplating my obsession with single-location films, I came to a surprising epiphany. When I was twelve years old, I was withdrawn from school. Our family lost the house, and we proceeded to spend the next four years living in various hotels throughout Northern Indiana. I lost contact with my friends. I was not allowed to go outside. I spent the next four years in hotel rooms, waiting for something new to happen, trying to figure out why my life had taken such a drastic, depressing route, and never exactly coming up with any solid answers. So, yeah, when I recently connected my single-location horror obsession with my bizarre childhood, it felt a little too obvious. It’s kind of funny it took me so long to figure it out. Also, maybe a little sad.

Living in hotels with my parents during my teenage years taught me the great truth of claustrophobia. I perfectly understand how being crammed into a single room with people — including people you love — can drive even the most rational mind insane after so long. As far I am concerned, films like The Descent and The Lighthouse equally succeed at conveying claustrophobia at its most terrifying.

People change. Relationships corrupt. When you spend enough time with someone, without an exit in sight, you won’t find yourself talking to the same person by the third act. A crazy thing happens to our brains when we experience a long enough isolation. After the hell year of 2020, this should be common knowledge by now. Think about Bug (2006). Ashley Judd’s character undergoes a profound transformation by the end of that movie — a transformation that begins with her and Michael Shannon isolating themselves in a motel room, disregarding any reality outside its four walls. I think that’s the key with these stories relying on restrained settings: understanding that once a person has existed within a box for a certain amount of time, the universe no longer functions the way it might for everybody else. After so long, the rules change.

And that’s when things get really fun.

We Need To Do Something is now in theaters and on-demand.