Be! Aggressive! Three Cheers For The Spirit Squads Of Horror

A look at the genre’s relationship with the most popular girls in school. 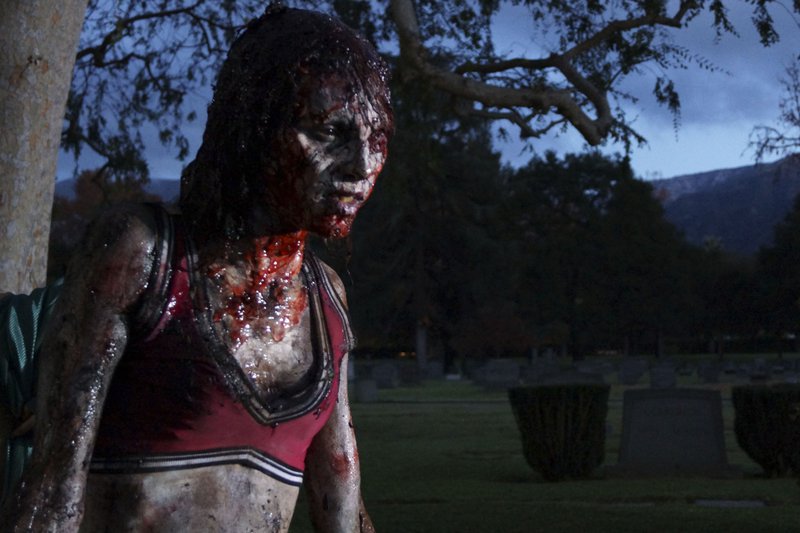 Felisha Cooper in ALL CHEERLEADERS DIE (2013)

With glowing skin, a smile that lights up a room, hair that flounces with every movement, a beaming aura of confidence that most people can only dream of, and a precisely walked tightrope between innocence and sexual deviancy – there are few institutions more American than that of the cheerleader. While cheerleaders have finally begun establishing credibility thanks to movies like Bring It On or the Netflix docu-series Cheer, America still remains simultaneously obsessed with and repulsed by the entire tradition surrounding spirit squads.

Just like cheerleading, horror is also an oft-misunderstood culture with a rabid fanbase desperately and consistently trying to defend its relevance in a society that deems it lesser than. The same way that cheerleaders feel like an idealized Reaganite time capsule where boys were meant to be football stars and girls were meant to provide their undying support and blind loyalty to them, the standard slasher movie formula perpetuates similar morality standards – hacking to bits any teenager that dare defy the unwritten rules – which makes cheerleaders, and other members of spirit squads like color guard and majorettes, the perfect vessel for all things horror.

Raunchy sex comedies and teen beach movies were the first to present cheerleaders in cinema, but Satan’s Cheerleaders in 1977 was the first foray into spirt squad horror. The 1970s delivered a bevy of films about devil worshippers, so it makes perfect sense that the absolute peak of corruptible American innocence would make their way into the hands of Satan. B-movie icons like John Carradine and Yvonne De Carlo star in this horror comedy about a cult of Satanists that kidnap a cheerleading squad in the hopes of finding a virginal sacrifice. It’s hard for most to imagine there was a time when cheerleaders were a surefire symbol of purity and virtue, but it wasn’t until the following year when the pornographic sensation, Debbie Does Dallas, would change everything.

Spawning fifteen sequels and spin-offs as well as an Off-Broadway musical, it cannot be overstated how impactful Debbie Does Dallas was at changing the public’s consciousness surrounding teenage cheerleaders. Although modeled after the 1976 Dallas Cowboys cheerleaders at Super Bowl X, as an ex-Cowboys cheerleader told The Guardian back in 2006, "We were the ultimate male fantasy girls that you wanted to take home to Mom – but you wanted to have sex with us on the way." Cheerleader representation in the horror movies of the 1980s were completely shaped by this newfound perspective that cheerleaders and their ilk were meant to be nothing more than objects of sexual desire, which made it easier for others to dehumanize them.

The All-American Girl was now nothing more than a bimbo worthy of slaughter needing to pay for the crime of being hot and popular. 1988’s Cheerleader Camp centered on a slasher running amok at a training camp, but the schlock fest was never meant to be taken seriously, likely because audiences wouldn’t have been able to take a film about cheerleaders seriously. They’re beautiful, they’re popular, they’re powerful, and for spectators who could not relate, they all deserved whatever was coming to them. The Madonna/Whore complex frequently explored in slashers was on display in its purest and most obvious form. Audiences tuned in not to be terrified of a mysterious killer offing teen girls – they were here for the fun of watching cheerleaders die.

A few years earlier, The Majorettes utilized the tantalizing image of baton twirlers as a way to trick audiences into thinking they were watching a slasher film, but the film quickly turns into a vigilante film with a male protagonist going after a biker gang responsible for the murders. All of the marketing and even the opening dance sequence (that genuinely feels like the grandmother to Bring It On’s roll call opening) focused solely on the girls, but as the movie plays on, they're forgotten in favor of a masculine display of vigilante justice. The time we do spend with the girls, however, is a constant reminder of their impurity. After they die, they are submerged or drenched in water, an attempt at baptizing them to wash away their sins. For what it’s worth, I genuinely like The Majorettes, but there’s a high probability my love for this film comes from the fact I went pro at baton twirling when I was seven years old, and this is literally the only movie that exists centered on majorettes.

Spirit squads weren’t as prominent during the '80s slasher boom, with filmmakers favoring sororities, namely because sorority girls weren’t as viscerally hated as cheerleaders. You could make an actually scary movie about girls trapped in a sorority house or undergoing hazing rituals, and people would take it seriously. Sorority girls hadn’t yet reached the dreaded bimbo status of cheerleaders, and were still viewed as worthy of survival.

Not to mention: despite cheerleading existing across a multitude of age groups, most people associate them with high school. The intrigue felt by viewers is immediately followed by a wash of guilt – knowing that their sexual enjoyment of a cheerleader is likely the enjoyment of a teenage girl. Rather than do the internal work to analyze why they’re titillated by underage women, viewers deflect that anxiety and warp it into a desire to see them suffer. An internal monologue may sound something like, “How dare this cheerleader make me feel this way? She deserves to be punished.” Whereas sorority girls don’t come with as much baggage, because the characters are guaranteed to be of legal age.

A few years before the Spice Girls made their mark on the world and made feminism look fun, a young blonde proved that cheerleaders could do more than chant about having a funky chicken or a loose goose. 1992's Buffy the Vampire Slayer is frequently forgotten in favor of the series that followed, but the cinematic Buffy (before she had the last name) Summers was the antithesis of the cheerleaders that came before her. Buffy didn’t need a team – she had herself, her high kicks, and a destiny to save the world. The juxtaposition of a superficial, ultra-femme valley girl being the only hope for humanity’s survival was not just entertaining, it was empowering. Cheerleaders were no longer meant to be underestimated.

The 2000s were a horrific time for women in pop culture. Aggressive body shaming, public harassment, edgelord humor, misogynist cruelty, and femme hatred were traded as currency. The internet was becoming more accessible, but we hadn’t yet developed a moral compass for how to use it. Instead, we turned our collective trauma from witnessing 9/11 on a constant loop into a hyperfixation on hating those who had it “better” than us. For the western world, that meant hating celebrities – specifically women.

If women were famous, it was likely because they were meeting the standard of beauty set by society and the possibility of being “famous for being famous” was now a reality. For those outside of the Hollywood cycle, the closest thing most people had as a target for this brand of woman-hating were the popular girls in school: cheerleaders. Hell, even Tarantino put Mary Elizabeth Winstead in a cheerleading outfit for Death Proof, knowing precisely what sort of complicated emotional response an outfit like that would elicit in 2007. 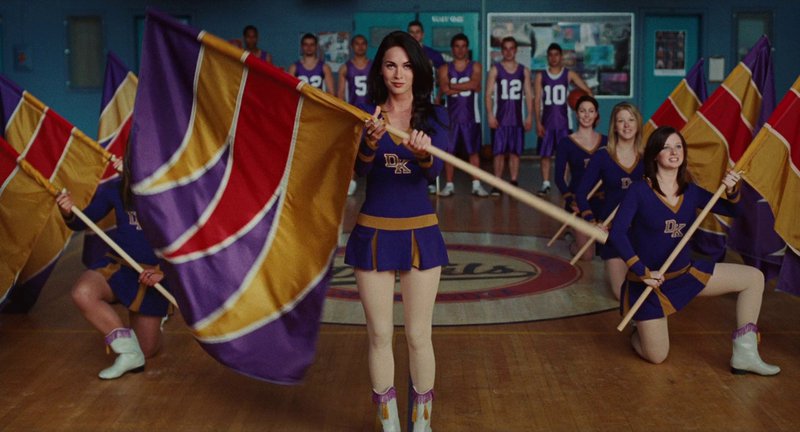 The success of 2000's Bring It On paved the way for an onslaught of cheer movies throughout the aughts, and the resurgence of '80s nostalgia (that we have yet to escape) brought a horde of low-budget cheerleading horror movies. Ninja Cheerleaders, Attack of the 50 Foot Cheerleader, Cheerleader Ninjas (yes, another one) and Spirit Camp all found ridiculous and campy ways to tell cheerleading horror stories, with the heart of an '80s slasher but the unbridled cruelty of the new millennium. None experienced this hatred, however, quite like Megan Fox’s flag-twirling succubus Jennifer Check in Karyn Kusama's Jennifer’s Body.

Jennifer’s Body, as we now know it, was severely misunderstood upon release. Audiences were too busy hating on Megan Fox the actress and getting duped by the marketing department from the “boy-run media” to understand the type of story this movie was trying to tell. The fact that Jennifer Check twirls a flag and yet is constantly assumed by fans to be a cheerleader speaks volumes on the way we make assumptions about femme women based on something as asinine as wearing a pleated skirt.

Fortunately, Jennifer’s Body has been given a retrospective reassessment, but the canonically queer, femme-appreciating All Cheerleaders Die is still being championed only by a legion of superfans who are impatiently waiting for the once-promised sequel. Lucky McKee's All Cheerleaders Die subverts any and all expectations of a cheerleader horror film, and audiences struggle to understand its idiosyncratic brilliance because of it. In it, the cheerleaders are fully aware of the social capital they possess and how to work it to their own benefit. The air that the cheerleaders of yesteryear were judged and shamed for possessing has now been unapologetically embraced, and this made plenty of viewers see these girls as unlikable and disappointed when they were not the ones being picked off one by one. The rampant misogyny (including internalized) of the aughts leaked into the 2010s, and All Cheerleaders Die paid an unfortunate price because of it.

Spirit squads are as American as systemic oppression and apple pie, and there seem to be no signs of that changing anytime soon. Just a few weeks back, SyFy announced that the seventh installment of the Bring It On franchiseis going to be a horror movie penned by FANGORIA's own Rebekah McKendry and Dana Schwartz, and the horror Twitter timeline lit up with excitement. The film is due out in 2022, and knowing McKendry was once herself a cheerleader, the film is more than in good hands.

The same way that horror movies cater to our fascination and revulsion with violence, cheerleaders serve as the beacon for both our fascination and revulsion with women owning their sexualities. As long as we struggle to represent, and perhaps more importantly, perceive this “type” of woman in a horror movie as worthy of survival, we’re still perpetuating a narrative that women of said “type” in real life are just as unworthy.