In Stephen King’s introduction to ‘Salem’s Lot, King writes that his original inspiration for the novel was rooted in his childhood love for Bram Stoker’s Dracula, recounting how as a kid in 1957, he devoured Stoker’s vampire horror classic. For King, the major attraction of Stoker’s novel was its compelling blend of horror and adventure – in fact, when he discovered Tolkien’s Lord of the Rings trilogy a decade later, he recalls instantly thinking of it as “a slightly sunnier version of Stoker’s Dracula.” And the comparison makes sense: while there is extreme darkness and horror in both narratives, there is also a compelling balance between the forces of life and destruction, light and darkness. This same balance plays out in ‘Salem’s Lot: the simmering forces of undead menace, commanded by the Nosferatu-like Mr. Barlow, are dangerous and frightening, but they are countered by the courage of characters like Ben Mears and Mark Petrie. 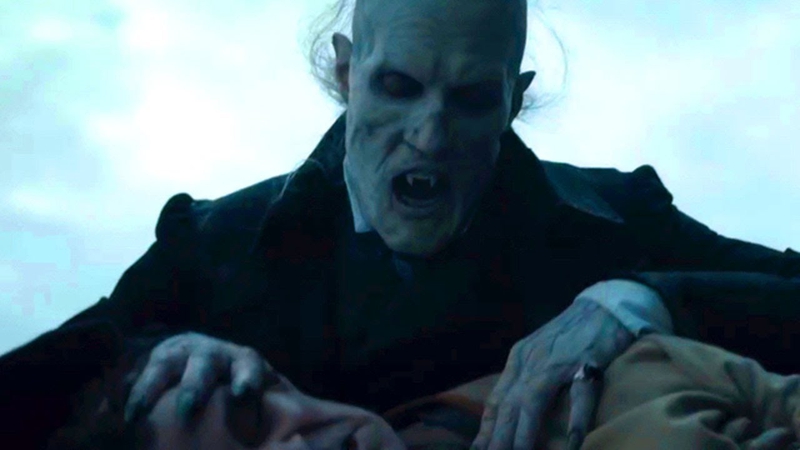 It’s a surprise, then, to compare ‘Salem’s Lot with its short story prequel “Jerusalem’s Lot.” If ‘Salem’s Lot hearkens back to the adventurous menace of Stoker’s Dracula, then “Jerusalem’s Lot” is a creepy homage to the cosmic horrors written by Lovecraft and his circle of author friends – an unsettling blend of vampire legend and cosmic horror. EPIX’s new show Chapelwaite starring Adrien Brody is an ambitious adaptation of “Jerusalem’s Lot” and, like King’s story, it combines elements of cosmic horror and classic vampire mythology. In so doing, the show embodies a hybrid genre that intertwines the themes of mortality and familial ties in traditional vampiric fiction with the alien horrors found in Lovecraftian fiction. The results are, to say the least, bloody and unsettling.

This article will be as spoiler-free as possible but, for the sake of coherence, I’ll touch on some major plot points in the show. So, for those of you who prefer to discover all of the show’s twists during your first-time viewing, I suggest reading the rest of this article after you’ve finished. Otherwise, continue reading… 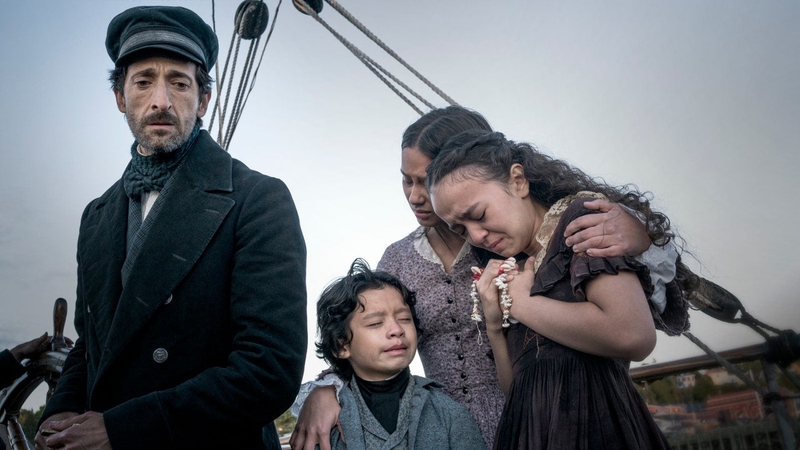 In Chapelwaite, Captain Charles Boone (Adrien Brody) returns to his ancestral home situated in the New England town of Preacher’s Corners, following his wife’s death and a mysterious summons from his cousin Stephen. What he hopes for is a reunion with family and healing from the trauma of both the recent loss of his wife and his horrific childhood memories of his deceased father’s murderous madness. However, what he discovers is the opposite: his cousin and uncle Stephen and Phillip are both dead, the town is hostile to the memory of his family, and hallucinatory visions of worms have begun to haunt him just as they did his father. Death is, if anything, even more ubiquitous than it was when he was at sea – and, even worse, the threat of some encroaching supernatural horror or hereditary madness tied to his family makes the danger feel all the more inescapable.

Chapelwaite employs familiar callbacks to classic vampire motifs to subtly trigger audience memories of the bloodsucker narratives that have scared us in the past, while also providing a foundation for the show’s creepy representation of Death as an inescapable and tangible presence — a menace as uncomfortably close as family. As Charles delves deeper into the mystery of the plague afflicting Preacher’s Corners, he discovers that his uncle and cousin are not, in fact, ‘dead’ – at least in the ordinary sense of the word. In Tobe Hooper’s 1979 adaptation of ‘Salem’s Lot, Hooper chose a Nosferatu-like appearance for the vampire lord Barlow, complete with pale skin, predatory yellow eyes, and rodent-like incisors for fangs. Chapelwaite brings back that look: Uncle Phillip and Cousin Stephen are both unearthly in appearance, enhancing the predatory danger that their posthumous new life presents to the living. 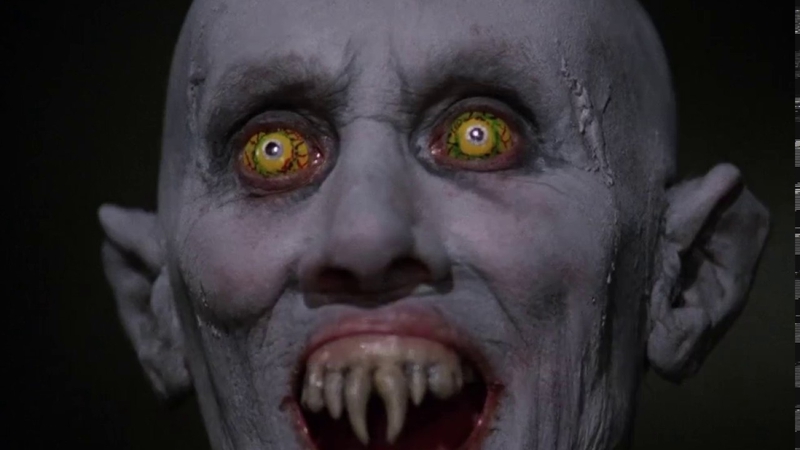 However, unlike ‘Salem’s Lot’s Barlow, Phillip and Stephen are something more than vampiric predators. They are family. For the bereaved Charles and his children, there is a dark irony to the discovery of vampirism and the way this discovery intertwines with a perverse family reunion of sorts. Yet this dark irony is a fundamental part of vampire lore: many early legends of vampirism stress that vampires are compelled to return to and feed on their surviving relatives. This was a motif that Lord Byron, in his 1813 vampire-poem The Giaour, describes as the curse of vampirism, as though these predatory undead creatures are unable to resist preying on their families as sustenance before all other living victims:

“Then ghastly haunt thy native place,

And suck the blood of all thy race;

There from thy daughter, sister, wife,

At midnight drain the stream of life…”

In Chapelwaite, this motif is taken a step further: vampires are not merely predators that prey on family members, but the family itself is inextricably tied to death. With his drawn, haggard look, Stephen appears as a dark mirror of the bereaved Charles himself. Additionally, the casting of the brilliant Julian Richings as Uncle Phillip has significant resonances: audiences are reminded of the kindly yet diabolical grandfather that Richings played in the recent horror film Anything for Jackson and, even more strikingly, his role as Death in the hit show Supernatural. Phillip and Stephen play different roles in the family unit: one is tyrannical, the other peculiarly sentimental. Yet both share a similar appeal: they are family members who both embody Death and seem to have thwarted its permanence. In the wake of the family tragedy that has hit the Boones, it’s clear why their presence is both frightening and appealing. They both embody the terror of mortality yet seem at the same time to transcend it.

But while Chapelwaite takes cues from the shadowy mythology of vampirism, it intertwines these mythic elements with callbacks to classic cosmic horror. The sinister, occult book De Vermis Mysteriis or “Mysteries of the Worm” plays a significant part in King’s novel and in Chapelwaite as a fictional occult tome, first featured in Robert Bloch’s Lovecraftian story “The Shambler From the Stars” in 1935. In Bloch’s original story, De Vermis Mysteriis is an evil book on par with the fabled Necronomicon, one that contains spells to summon vampiric, alien creatures (like the titular “shambler”), with more or less disastrous consequences. In Chapelwaite, the book serves a similar purpose. Without venturing into major spoilers, the book reveals a maddening knowledge that touches not only on vampirism but also, as its title suggests, the mysteries of Death. And by ‘mysteries of Death,’ I mean a worm god that, if summoned, could bring about an apocalypse for the living and the ultimate triumph of the undead.

The creepy concept of a worm god, too, has a fascinating similarity to a tale written by another Cthulhu Mythos alumni – this time, not Bloch but Thomas Ligotti. In his chilling tale “The Last Feast of Harlequin,” first published in 1990, an anthropologist investigates an isolated town in America called Mirocaw and its annual winter solstice festival. He discovers a cult that worships an ancient elder god who transforms his worshippers into pale, worm-like entities. To add to the morbid theme of his narrative, Ligotti draws haunting parallels between the morbid, seasonal depression that his protagonist suffers from every winter and the worm cult that his horrified protagonist discovers in the secretive circles of Mirocaw.

So what does it mean to take your cues from Lovecraft, Bloch, and Ligotti instead of Stoker in your vampire series? Turns out, quite a lot. In Chapelwaite, Death is defined as something more than just an existential reality – it becomes something palpable and conscious, something that haunts Chapelwaite’s environs like the ultimate vampiric monster. By juxtaposing the creepy ties between family and death inherent in vampire folklore with the existential implications of cosmic horror, Chapelwaite not only echoes the unique hybrid genre that Stephen King creates in “Jerusalem’s Lot” but builds on this creepy atmosphere with its own unique focus on family ties, grief, trauma, and memory. If you’re looking for a thoughtful and genuinely terrifying Gothic horror show that unites Lovecraftian horror with vampire mythology, then you will love Chapelwaite.

All ten episodes of Chapelwaite are now streaming. Click below to watch: