CHALLENGE THE DEVIL Is A Challenge To See

But thanks to Severin Films’ new Christopher Lee box set, you can! 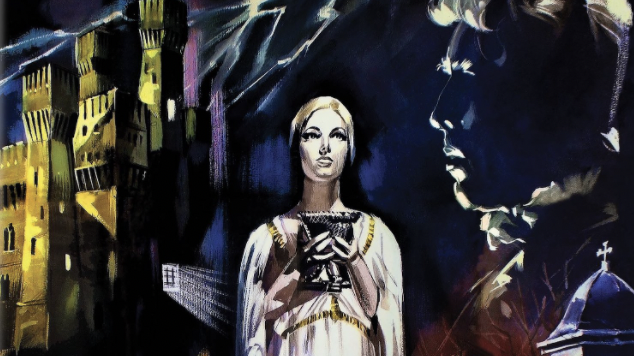 Movies are lost for countless reasons, but it’s not often that they’re lost because they’re wretched. 2021 is shaping up as a year for lost movies: Ahmir “Questlove” Thompson’s superb Summer of Soul (...Or, When the Revolution Could Not Be Televised) turns Hal Tulchin’s footage of the 1969 Harlem Cultural Festival into the documentary it should’ve been after moldering in his basement for 52 years; George Romero’s The Amusement Park landed on Shudder by the preservational efforts of Suzanne Desrocher-Romero, Yellow Veil Pictures and IndieCollect, after the Lutheran Service Society of Western Pennsylvania quietly shelved it. Nobody bought the former for commercial release. The Lutherans rejected the latter because they asked for a PSA and got a horror film instead.

So it goes. Now add Giuseppe Veggezzi’s Challenge the Devil, AKA Katarsis, AKA one of the missing chapters in Christopher Lee’s legendary career, and compare the reasons for that film’s 58-year interment to the others’. Thompson and Romero both ran into resistance from the industry and from producers. Challenge the Devil ran into cash flow problems, outside intervention amounting to too many hands in the pot, and finally what reads today as a begrudging admission that the movie just wasn’t any good. I Films della Mangusta, Challenge the Devil’s original studio backer, met financial catastrophe in 1963; two years later, Eco Film took a stab at finishing the film via scads of new footage procured by Ulderico Sciarretta. Sciarretta fused his work with pieces of Veggezzi’s, and the resultant gallimaufry was such an abomination that everyone agreed not to speak of it or show it to anyone.

Even Lee didn’t get to see the rushes. Author Jonathan Rigby notes as much in “Gotico Italiano,” one of the chapters of Christopher Lee: The Continental Connection, the essay booklet he compiled for Severin Films’ 9-disc Blu-ray set The Eurocrypt of Christopher Lee Collection. “Watch this peculiar and mediocre movie lost to time!” isn’t a big selling point for most save for completionists, so Severin did us all the courtesy of packaging Challenge the Devil with bona fide Lee bangers – Crypt of the Vampire, Castle of the Living Dead, Sherlock Holmes and the Deadly Necklace and The Torture Chamber of Dr. Sadism – alongside 24 episodes of the 1970s anthology television series Theatre Macabre, where Lee played the role of host. It’s a monster of a set befitting Lee’s status.

Counterintuitively, Challenge the Devil may be the best reason for the set’s existence. It is not a good film by any stretch of the imagination, though it is a cozy home for a tremendous Lee performance. But lost films don’t necessarily need to be “good” to deserve attention. The very fact of being lost arguably makes Challenge the Devil essential viewing, though calling the film “lost” feels awfully generous – Challenge the Devil was forgotten, not misplaced.

Now remastered in 2k from the original Italian negative, Challenge the Devil gives us all a chance to see Lee revitalized, his voice booming in one of his ancestral tongues. On the surface, he’s Faust. Under the hood, he’s Satan himself. He makes such an impression in his brief screen time that he makes the picture feel alive all on his own, a great feat given its disjointedness and frankly bizarre material. Challenge the Devil is a Eurospy movie. Then it’s a spiritual drama. Then it’s a musical. Then it’s a crime film, a sex film, and a party film. Then Lee arrives and finally, finally, it’s a gothic horror film with comically inadequate production values, though most of the budget is mercifully accorded toward shooting the hell out of the thing. It looks terrific, even if the props don't always stand up to scrutiny. A spider puppet sporting googly eyes doesn’t exactly scream “scary.”

In fairness, it’s nigh-impossible to be scared of a film this hodgepodge. Challenge the Devil opens as two gangsters (Sergio Gibello and Pasquale Basile) attempt to murder a man, Carlo (Ettore Ribotta), that they believe to be in possession of incriminating documents plus a wad of blackmail money; the man bleeds his way over to the monastery where his old pal, Peo (Piero Vida), dwells. Peo goes by Father Renigio now, having reformed from his misspent youth as a drunken sex-crazed thug. Turns out Carlo’s actually innocent of robbing his would-be killers, and his ex, Alma (Alma De Río), is the one responsible for pissing them off, so Peo pleads with her to hand over said documents and in so doing spare Carlo’s life. Alma refuses, so Peo pulls the ace up his sleeve: the tale of how he and his old bad friends ran into Satan in a creepy mansion in the middle of nowhere.

If you made it through that paragraph, you’ve more or less earned the right to skip past the first twenty minutes of the film, which considering the brisk running time really drags its feet. In Peo’s somber recollection, he and his crew of sloppy drunk punks took an excursion to an abandoned castle years prior, causing mayhem on the way, and ran afoul of its nameless host (Lee – at last!). He makes introductions, beseeches the sextet to scour the castle to find his dead lover’s missing corpse, and then transforms by fireside from trembling and melancholic with white-shocked hair into a figure that’s far more prototypically Lee: imposing, dark, face set with an implacable menace – the good stuff.

And then he more or less vanishes from Challenge the Devil, leaving the audience alone with the bland and broadly drawn miscreants. They see a ghost here, they’re attacked by Lee’s character there, they’re trapped in a maze of glass upstairs, and finally they’re doused in ichorous slop before the film finally comes to a stop. We’re left only with Peo’s moralizing, Alma’s guilty conscience, and the bewildering sensation of having watched a movie almost too inept to be worthy of its star’s presence.

But that’s the value of Challenge the Devil in the Eurocrypt’s context. Lee’s figure could not be dwarfed. He participates in the movie with what amounts to a glorified cameo, but commands the frame every second he’s permitted to occupy it. His character has a story, a reason for being, and with every slight gesture Lee makes, that story is brought closer to Challenge the Devil’s surface. No one needs to look very far to find better examples of Lee’s gifts as a thespian. There are four of them in this box set alone. But for a better example of how those gifts could not, even in the most dire of circumstances, be suffocated, look at Challenge the Devil first.